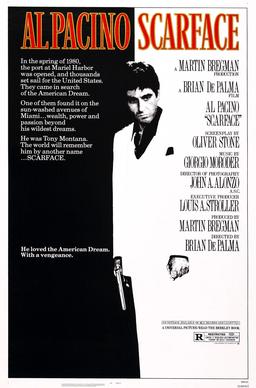 (This review originally appeared in different form on Epinions.com)

In 1983, Brian De Palma was offered the opportunity to direct Flashdance. He declined. Instead, he chose to direct a 1980s re-make of a 1932 Howard Hawks film starring Paul Muni. De Palma made the right decision. While Flashdance has moments (most of them involving Jennifer Beals) that make it worth watching, it hasn’t gone down as a full fledged classic the way the movie De Palma decided to do instead has.

That movie of course turned out to be Scarface. Starring Al Pacino, with De Palma in the directors chair and a script penned by Oliver Stone, the result is a gangster movie that none too subtly comments on the decade of excess.

Scarface begins with some documentary footage of the Mariel boatlift. It is revealed that when Castro allowed Cubans to migrate to the United States in 1980 he didn’t just allow the innocent people who wanted a chance at freedom and opportunity. No, he emptied his jails and mental hospitals. Among those criminals who migrated to the US is a fictional one named Tony Montana (Al Pacino).

We first see Montana scheming his way past some immigration officials. He ends up in a refugee camp with his best bud Manny (Steven Bauer). Opportunity comes his way when he is offered a chance to get a green card for himself and Manny by killing a Cuban who worked for Castro. He agrees and soon has the card. However, his first job is working as a dishwasher at a Cuban sandwich stand. Tony wants the American dream. But he has no desire to do any real work for it. So when offered a crack at the South Florida drug trade he takes it. Before long, he’s risen through the ranks and rules the roost (apologies for mixing metaphors).

Scarface is (like Martin Scorsese’s Goodfellas) a portrayal of a man who so desperately loves material wealth that he’s willing to go to any length to get it. But it is way less subtle about this than Scorsese’s film was. It is probably the most over the top studio gangster movie ever made. That alone makes it a classic. The movie is three hours long. But I’ve never been bored while watching it.

Pacino gives what may be the most iconic performance he’s ever given. What makes it work is that he knows when to dial down. He goes over the top 90% of the time and the film calls for that. The other 10% in scenes where he refuses to kill an innocent woman and child and scenes involving his younger sister (Mary Elizabeth Mastrantonio) helps make Montana a real character, not a comic book caricature.

Like I said earlier, De Palma’s direction here is not subtle at all. But that’s not a criticism per se. Unsubtlety is what Scarface needs to really work and he gives it his all. It’s a film about the excesses of the 80s sure. But it still holds up today for a couple reasons. One is the influence the movie has on the hip-hop culture of today, particularly the gangsta rap element. The other is that Tony Montana is not much different from the white collar thieves of today. Take the guns away from Tony and you’d have Bernie Madoff.

The one part of Scarface that has become dated is Giorgio Moroder’s score. The synth beats immediately scream 80s.

The direction, characters, acting by Pacino, Bauer, Robert Loggia and Mastrantonio and Stone’s script combine to make Scarface the classic that it is. Even though it may be a great movie instead of a full fledged masterpiece, it’s still worthy of its status.