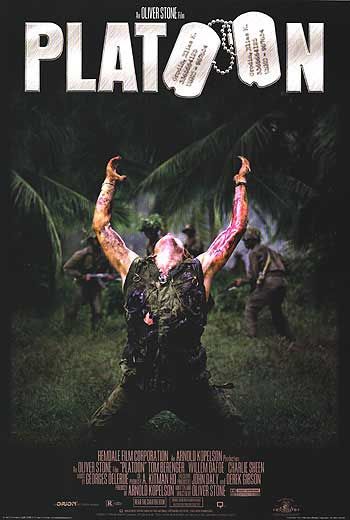 Cons: Can be tough for some to sit through.

(This review originally appeared in different form on Epinions.com)

Platoon was the very first R-rated movie that I ever saw. I first watched it in 1988 when I was 11 years old. At the time I wasn’t like most kids in that I was less interested in playing with GI Joe toys and more interested in history. One particular aspect of history that caught my attention was the Vietnam War.

So I was watching quite a few war films as a result of this interest and my father asked if I had seen Platoon. I answered no. It was soon to be shown on HBO. He suggested we watch it together. He also cautioned that the violence in it was going to be very brutal and that the soldiers in the film would be using certain words he did not want to hear me using. So we sat side by side on the couch in the apartment we lived in at the time, munched on a bag of Lays potato chips and watched Oliver Stone’s recollection of his tour of duty in 1967-68. When the credits rolled I sat there dazed and pondering a question that had once been raised in a comic strip. The question: How do armies of men killing each other solve anything?

That’s the effect Platoon has on anyone who watches it. It takes a piece out of you. Big time. No matter how many times you see it, it still cuts right to the bone.

Platoon was not the first feature film to tackle the subject of Vietnam. In 1978/1979 we were treated to Coming Home, The Deer Hunter and (one of my top 5 all-time favorite films) Apocalypse Now. Platoon differed from those films in that it set out to be a straight-forward portrayal of ground-level combat in everyone’s not-so-favorite Asian land war. While Coming Home examined the effects of the war on returning vets, Apocalypse Now was an existentialist fever dream/nightmare set against the backdrop of Vietnam and Deer Hunter was your classic parable on man’s inhumanity to man, Platoon drops the audience right into the combat and doesn’t look back.

Stone originally wrote the script for Platoon in 1976. But could not get a studio interested. So he waited ten years and in the interim directed a low-budget horror film, wrote some screenplays (Scarface and Midnight Express most notably) and won a screenwriting Oscar for Midnight Express. Finally a decade later he acquired the independent funding needed to make Platoon. In retrospect it was better that he waited because he was able to secure a fantastic cast for his film.

Charlie Sheen plays Chris Taylor, a young college dropout who enlists in the army in 1967 and is posted (per his request) to Vietnam. Specifically he ends up in part of Vietnam along the Cambodian border. Taylor finds himself in a platoon that’s divided between the dopers who smoke the titular stuff and listen to rock and soul and the juicers who drink beer and listen to country music. The platoon leadership is also divided: between the hard tough Sgt Barnes (Tom Berenger) and Sgt Elias (Willem Dafoe) who’s a very good soldier yet still has a sense of humanity to him. Barnes has survived numerous wounds and has the facial scars to prove it. He’s survived so many that some of the men in the platoon think he’s invincible.

The divisions in the platoon erupt into full-fledged civil war when the soldiers happen across a village that they suspect may be hiding Viet Cong. When weapons and food are discovered, several of the men are crazed for revenge which almost leads to a Mai Lai style genocide. Elias steps in and stops Barnes and his followers from committing a massacre. But in the process he also elevates the tension in the platoon into full-blown conflict. By the end of the movie Taylor remarks in voice-over “We did not fight the enemy as much as we fought ourselves”.

Berenger and Dafoe were both deservedly nominated for Oscars for their roles as Barnes and Elias. Sheen gives a uniformly good performance as Chris Taylor. Also good in the acting category for Platoon are Kevin Dillon as the psychotic Bunny, John C McGinley as a frightened SSgt, Corey Glover (of Living Colour), Keith David, Johnny Depp (when he was still on 21 Jump Street) and Forrest Whittaker.

When he set out to shoot Platoon, Stone determined to make it look as close to his personal experience in the war as he could. His approach to this was effective. Instead of following the approach of most previous war pictures and shoot the combat scenes from an over-head perspective, he placed the camera right in the middle of the action. This resulted in Platoon being (at least as far as I can tell having never fought in a war myself) the closest Hollywood has came to offering a you are there portrayal of battle, at least until a certain Spielberg directed one nearly 12 years later. You share in the confusion and terror the men feel. Stone also chooses to keep the politics out of the equation and stays away from flashy editing techniques which would enhance (and sometimes mar) some of his later films. Here the focus is exclusively on the story. It’s a good choice and helps Platoon resonate even more with the viewer.

Watching this film today, I find it has not lost any of its edge or resonance. It represented a high-water mark for both Oliver Stone and his cast. If you want to see a war film that delivers a realistic portrayal of how war really is and offers some superb acting and cinematography as well or if you’re looking for what set the stage for films like the recent Oscar winner The Hurt Locker, then Platoon is the film to see.