DESTROY EVERYTHING ONSCREEN: GUERRILLA WAR FOR THE NES

for the Nintendo Entertainment System 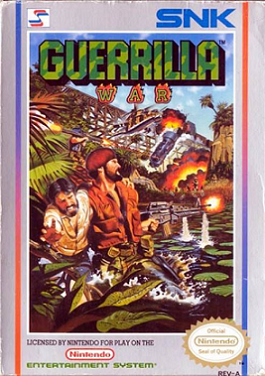 Cons: Difficulty level is frustrating for various reasons; gets tiresome down the line

Probably one of the games that caused the most confusion for youngsters when it came out back in 1988 (“why is this called Gorilla War?”), Guerrilla War for the NES remains one of the best overhead-perspective, run-and-gun titles the system had to offer. The players (up to two can play at a time) assume command of unnamed guerrilla fighters as they attempts to infiltrate an island nation all the way to the Capitol, where they hope to “destroy” an enemy leader and therefore bring peace to the land. After being dropped near the coast by boat, the players quickly find themselves in the middle of swarms of enemy fighters – normal commandos firing machine guns as well as more specialized personnel launching grenades or firing rockets. Levels progress at the players’ pace (they don’t self-scroll) and not all enemies have to be eliminated in order to progress: once a certain location is reached, a boss battle commences regardless of anything else going on. The game consists of ten levels, sending the player through forests, swamps, towns, a sewer system, and finally to a heavily-guarded enemy fortress, and the action throughout the game is absolutely furious.

Main perspective of the game – note the yellow hostage in the upper right of the screen.

Players have initially have two options with regard to their offense: a relatively low-powered machine gun is the basic weapon and the player can also throw grenades which inflict more substantial damage. Throughout the course of the game, various power-ups can be acquired which significantly increase the firepower of the basic gun. Ranging from missiles to a devastating flamethrower attack, these power-ups only last as long as the player stays alive then disappear, but they nonetheless make playing the game much easier. Ammunition supplies are infinite, so one can literally blast away with little regard for much else…unless saving various hostages who appear throughout the game is viewed as a priority. To be honest, there’s little incentive to save these hostages, most of whom appear to be tied to posts in the ground. A player receives 1000 (relatively useless) “points” for each hostage rescued and is docked 500 points for each one inadvertently killed, but the “points” don’t do much except keep a tally of how much destruction the player has wrought. Since hostages can quite easily be killed in the chaos of battle, it’s almost a miracle to save any of them.

What one immediately notices about this game (developed by SNK and based on a popular arcade cabinet of the time) is that it’s very, very busy: the stream of enemies thrown at the player is both constant and voluminous. Players are all but surrounded by enemies coming from all sides and behind from the time the game is started to the point where it’s shut off. Considering the steep difficulty then, it may be a good thing that Guerrilla War offers an endless number of continues – at the game over screen, the session can be immediately restored from the last point reached. The downside to this, of course, is that this game (like the monster mash Rampage) isn’t much of a challenge: the sense of accomplishment one receives from finishing it is minimized by the fact that it’s literally impossible to “lose” Guerrilla War provided an hour or so is dedicated to completing it.

Sadly, achieving this screen doesn’t feel like much of an accomplishment.

Graphically-speaking, Guerrilla War isn’t especially flashy, but is quite decent for its time (remember, it’s damn near thirty years old at this point), with nifty level design and plenty of colorful visuals. There’s also some nice attention to detail considering its age: for instance, certain varieties of enemies (including those crouched down or in foxholes) are lower than the player’s machine gun, so they can’t be dispatched in the same manner as others. Some of the landscape objects (sandbags for example) can be destroyed by grenade or rocket fire, allowing for level destruction that was uncommon in games of this time. It’s also pretty neat that enemy tanks spiral out of control and fire wildly just before they explode.

Twisting and turning through the sewer level.

I like the fact that the game doesn’t necessarily just progress from the bottom of the screen to the top; there are some twists and turns to the levels that a player has to negotiate, which can lead to some intense crossfire and firefights to deal with. The bosses thrown at the player during the course of the game are fairly memorable, and an appropriately hectic if unremarkable music score adds to the frantic pace of the proceedings. I should also note that this game provides genuine catharsis since the goal is to essentially shoot every damn thing on the screen. I even can’t entirely deny a sense of satisfaction that’s achieved from “accidentally” torching hostages with the flamethrower: call me a sadist, but this becomes amusing in the same way that shooting the nurses who rush across the screen during the side-scrolling shooter Operation Wolf does. Finally, this game is an absolute blast to play cooperatively along with a friend; one of the most downright fun two-player titles out there as far as I’m concerned.

Probably the most frustrating thing about this game (aside from the fact that a player is likely to get killed many, many times while playing it) is the fact that gameplay and formula of the title is rather familiar. The sheer number of military-themed shooting games for the NES was staggering – the system was introduced in the midst of the Cold War after all – and while the capably-made Guerrilla War is a definite step up from some of the more listless titles out there, one can’t quite shake a feeling of “been there, done that” while playing. Additionally, the game’s strengths work against it on some level: since there is so much going on onscreen at any given time, the game has the potential to flicker and noticeably slow down on occasion. This can be very irritating to deal with, especially during the final few levels. It also should be said that there’s not a ton of variety to the gameplay here: though immensely fun in relatively small doses, the game does get tiresome down the stretch, seeming like absolute overkill by the time one reaches the last stage.

Wait a second…is that Cuba?

An interesting note: in the original Japanese version of this game, the playable characters were named “Fidel” and “Che,” and since the country being infiltrated bears a striking resemblance to Cuba, it’s not hard to figure out what this game was based on. Per Nintendo’s strict censorship requirements, most traces of the game’s original story were removed from the North America version of the game, but a title screen showing a recognizable portrait of Fidel Castro does inexplicably remain.

Imperfect though it may be, I think the developers behind Guerrilla War honestly made the best out of the technology of the time that they could. This game is extremely playable and quite fun for what it is: a title that’s ideal to throw on and chill out with for a few minutes after a long day. It might be a little rough around the edges, but game publishers hadn’t quite figured out the capabilities of the NES in 1988. That this game functions exactly as it’s supposed to – and as one would expect it to – isn’t necessarily an altogether bad thing despite the fact that the game might seem somewhat blah in comparison to both later NES titles and (obviously) to games of today. Despite its , I probably wouldn’t call this one of the absolute best NES games, but it is a very solid B-title that’s well worth playing – especially if you can snag a friend to play along with.