MOOD OVER MATTER IN THE WORTHWHILE BUT MESSY LOST RIVER 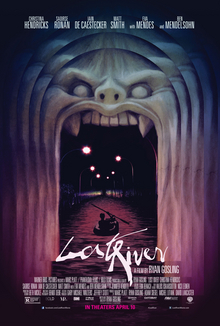 Pros: Commanding visuals and overall weirdness make it fascinating for those with adventurous tastes Cons: Lacks a strong story and narrative; absolutely NOTHING like the typical Gosling movie

Featured prominently at 2015’s South by Southwest Film Festival after having premiered at Cannes in 2014, Lost River, Ryan Gosling’s debut effort as a director, has polarized audiences ever since, and it’s not difficult to see why. A vaguely futuristic (is this what America is going to be like in a few years???) and very dark tale about a single mother and her two sons who live in squalor in a section of America that’s clearly been passed over during any supposed economic recovery, Gosling’s film is about as far removed from the sort he typically acts in as can be imagined, reminding me of something Harmony Korine might make. That alone should tell you something about what to expect here: this would have positively no appeal to the rom-com crowd – or those who enjoy blockbuster films in general for that matter. iInstead, Lost River might just be the grimy and unsettling piece that fans of David Lynch’s peculiar brand of cinema have been looking for, an artistically satisfying, visually striking piece that’s as perplexing as it is clumsy.

Living in a dilapidated, graffiti-covered section of America (the film was made in Detroit – and it shows), single mother Billy is about to lose the rundown house she lives in with her two boys due to foreclosure. A particularly seedy banker gives her a potential way out however, offering her a job at a weirdo nightclub that he operates which caters to, well, specific tastes. Meanwhile, her teenage son named Bones is having troubles of his own – a vicious crimelord named Bully has put a stop to his copper-stripping operation, leaving him to fend for himself in an effort to make a few bucks. While talking to a female neighbor named Rat, Bones learns that a nearby reservoir hides the remnants of a town which was flooded during its construction, and eventually comes to believe that the flooded town may hold a sort of mystical power that can provide his family with the means they need to escape their troubling surroundings before it’s too late.

To be completely honest, Gosling’s story is very difficult to come to grips with while watching the film and his script is easily the worst element of the picture. Confused and plain messy, it seems to be a cut and paste collection of scenes more than a consistent or remotely coherent narrative, and the fact that so much of what is seen in Lost River was tackled in works by the likes of Lynch, Nicolas Winding Refn, and others winds up being problematic – viewers well-versed in the dark side of cinema would have seen much of what’s here before. Hell, I could make an argument that Gosling’s picture very much resembles Refn’s Fear X, an intriguing little film which was universally misunderstood by critics and audiences to the point that it nearly ended the director’s career, or even Andrei Tarkovsky’s divisive Stalker. Like those pictures, Lost River is much more concerned with establishing a quietly creepy atmosphere than with giving the audience much in the way of answers or even a logical story arc. This ultimately means that many viewers will simply be baffled by this film – it’s just not at all designed for viewers with mainstream tastes.

Those willing to allow themselves to fall under the spell cast by the film are likely to enjoy Gosling’s effort quite a bit however. Photographed extraordinarily well by frequent Gasper Noé collaborator Benoît Debie, the film is plain gorgeous to look at, chock full of astounding and memorable visuals which include many repeated motifs which foreshadow events that happen later. Odd camera angles and vantage points are utilized extensively, a fact which only accentuates disorienting nature of the picture and heightens its level of eerieness. Since a large portion of this film takes place in underlit or flat-out dark environments, instances of vivid color are all the more arresting and eye-catching. Considering the way in which many of today’s directors relish shots of gore and bloodshed, I appreciated the fact that, although there are some scenes of intense violence, Gosling chooses to show the effects of the violence more than the act itself  – which actually makes these moments more shocking since a viewer’s imagination fills in the gaps.I thought the acting here was generally decent. Mad Men‘s Christina Hendricks seems a bit overwhelmed playing Billy, appearing to be as confused in her portrayal as some viewers are likely to be with the film. Some of this is intentional and works in context, but I’m not entirely convinced that Hendricks knew where to go with the character at certain points – more the fault of the muddled script and unsure director than hers. Iain De Caestecker, playing her son Bones, is frankly given more to work with in the script and fares better in his performance. While Billy is left to go about her business, the film mainly focuses its attention on how Bones views and is affected by what’s going on around him and DeCaestecker is up to the task of relating the character’s fragile emotional state. Saoirse Ronan (playing Rat) provides about the only genuinely bright character in the piece, and though she comes across as a fairy-like being who guides Bones toward his destiny, it’s refreshing that the film didn’t go overboard with the inevitable romance between the two. As the villains, we have Matt Smith playing Bully and Ben Mendelsohn as the slimy and nefarious banker named Dave who makes the viewer’s skin crawl whenever he’s onscreen. Finally, former scream queen Barbara Steele appears as Rat’s comatose grandmother – it’s cool to see her here, but she’s wasted in a very minimal, thankless role.

Boasting a wonderful, John Carpenter-like soundtrack from electronic producer Johnny Jewel, Lost River clearly positions Gosling as a director of note and is a more-than respectable first effort. The film has an almost uncomfortable air of desperation throughout, and is quite harrowing to watch at times. Still, it’s problematic in many respects particularly with regard to the script, indicative of a director’s ambition exceeding his actual ability at an early point in his career. Idiosyncratic and just plain weird, this is a ready-made cult film that will undoubtedly leave a bad taste in many viewers’ mouths – and may be downright shocking to those accustomed to seeing Gosling involved in more wholesome, mainstream entertainment. Personally, I liked this film but it seems tailor-made to suit my (admittedly outlandish) tastes. Though I’d certainly recommend Lost River to adventurous viewers looking for something unusual, those in the market for a sure-handed, purposeful piece may as well avoid it like the plague.

6/10 : Though not nearly as graphic as some films out there, the violence in this film is rather disturbing and the film as a whole is very unsettling. 7/10 : Generally pointless use of harsh four-letter profanity: almost seems like a case of having the language thrown in to secure an R-rating right off the bat. 4/10 : What it lacks in actual nudity or onscreen sex, the film tries to make up for in sleazy implications. 8/10 : A genuinely strange movie (and ready-made cult film) that would be an acquired taste – at best – for many. That said, I dug it. “Everybody’s looking for a better life somewhere…maybe you will find some, someday…”