The third and final film in the official Sabata trilogy of Italian-made westerns (which started off with 1970’s Sabata and continued with the following year’s Adios, Sabata), 1971’s Return of Sabata also marks the return of Lee Van Cleef to the title role after the actor was replaced in the previous film by Yul Brynner. This time around, the sharpshooting Sabata finds himself facing off against a land baron named McIntock who has imposed a series of taxes on the residents of a small Texas town. Though McIntock claims to be using the money collected for improvements to the town, none of these improvements have materialized thus far. The situation raises the suspicions of Sabata who, believing McIntock is scamming the townspeople, initiates his own plan to steal the money for himself.

Van Cleef and Schöne ponder their next move.

Return of Sabata starts off with a scene in which the titular character faces off against a half dozen gunmen who have cornered him in a barn. After Sabata, who carries perhaps the most unintimidating gun ever seen in a western, has apparently killed all of his stalkers whilst a group of well-dressed men inexplicably watch from a nearby table, clowns burst through a door and establish that the whole opening sequence was a trick-shooting demonstration taking place at a traveling circus. This more or less sets up the way in which director Gianfranco Parolini’s film works from then on out: as an uneven mixture of western movie action/adventure and goofy comedic elements. The previous two Sabata films also played out in much this same manner, but the formula had been all but played out by this third entry in the series – the western movie elements are tolerable, but the comedy frequently falls flat.

Co-written by director Parolini and Renato Izzo, the film offers up little to distinguish itself from the hundreds of similar Spaghetti Westerns made around this same time, instead seeming quite gimmicky and downright muddled. A viewer is never quite sure of any of the character motivations – particularly true with regard to a casino owner and a carriage driver who wind up standing with Sabata in opposition to McIntock. From one scene to the next, the nature of these characters seems to change drastically with little regard for consistency or logic. Certainly some of the ambiguity here is intentional: the flip-flopping does create tension among the major players in the story and adds twists and turns to an otherwise familiar plot. Still, poor writing and haphazard story development ensure that it’s increasingly difficult to follow what’s happening in the film at a certain point.

Clowns? Why not! The whole movie is jokey and gimmicky.

Adding to my disinterest in this picture was the fact that Sabata manages to conveniently weasel his way out of any potentially dangerous situation he encounters, with the writers not so much as even trying to explain how much of this is possible. If I didn’t know better, I might say that the Sabata character is built up as a sort of superhero: “the only invincible man in the countryside” (as the theme song says), with a lucky streak that won’t quit and a sense of premonition that alerts him to any hazards ahead of time. Since there’s never any honest or believable threat to Sabata’s well-being then, the film quickly becomes downright boring. One watching the film is all but certain of what’s going to happen in the end, and probably can even predict the way in which it will happen…which begs the question: what is the point of watching an entirely predictable movie about an indestructible smart-ass who has his way with everyone and everything he encounters? 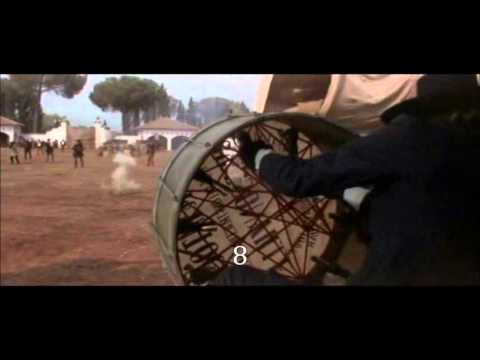 Yep – a drum filled with revolvers. They were all over back in the wild west…

Honestly, without the appearance of one Lee Van Cleef as the aforementioned indestructible smart-ass, there would be virtually no reason to watch Return of Sabata. Though the actor could easily sleepwalk through a role of this sort, he has a confident swagger throughout this picture, making it significantly more tolerable and even watchable. It’s always cool to see that devilish Van Cleef scowl – after all, the guy could pierce steel with his glare, and listening to him bark out his lines with authority and a playful disdain for the other characters is undeniably enjoyable. In the supporting roles, we have Reiner Schöne as the casino owner who has a debt to settle with Sabata, the rotund Ignazio Spalla as the buffoonish carriage driver, and Giampiero Albertini as McIntock, performances which are largely undermined by atrocious English-language dubbing (the Irish accent given to the McIntock character is especially horrific). That it’s impossible to take Schöne and Spalla seriously is not so bad – their characters are more humorous in nature, but having Albertini cast as an ineffectual and almost laughable villain may be the deal-sealer that sinks the production. It’s worth noting that the villains in the first two Sabata films were also unimposing – the lack of defining, well-crafted “bad guys” may be the ultimate reason why this series pales in comparison to the so-called “Man With No Name” trilogy.

Action scenes in the film are actually decent, but as a whole, Return of Sabata lacks vitality.

Technically speaking, Return of Sabata isn’t bad. Sandro Mancori’s photography is magnificent even if the overall production is drab, and Marcello Giombini’s score is memorable – particularly the opening title. As was the case in the first two Sabata films, director Parolini creates some good individual sequences. Return of Sabata’s action scenes are generally well-staged, and I especially liked a shot in which the camera offers a first-person perspective of a man lining up and firing a slingshot drawn between his legs. Unfortunately, there’s not enough pizazz in in the film: at 105 minutes, the film seems overlong and really lags in between the standout moments. In the end, it’s doesn’t seem a coincidence that the utterly unremarkable Sabata films have been largely forgotten to time: this series simply can’t compare to Leone’s grandiose westerns or even the outstanding B-grade Spaghetti’s by the likes of Corbucci or Martino. Devotees of the Italo-western may want to give this final Sabata film a look just for completion’s sake, but it’s certainly not among the best of its type.

4/10 : Typical western gun violence and fisticuffs with some blood.

2/10 : “Women of leisure” feature prominently in the story, and though there are a few sexual references, there is no onscreen sex.

3/10 : Easily the weakest of the Sabata trilogy and a pretty forgettable Spaghetti Western overall.