A NICELY-COMPOSED PORTRAIT OF NASCAR ROYALTY: I AM DALE EARNHARDT

I AM DALE EARNHARDT

Pros: Well-selected archival materials; provides exactly what one would want in a documentary about “the Intimidator”
Cons: Nothing major – though this clearly was produced for and by NASCAR

Roughly 75 minutes in length, the 2015 Spike TV documentary I Am Dale Earnhardt chronicles the life and career of the iconic stock car driver. Born in small town North Carolina, Earnhardt grew up watching his father tear up the local short tracks, learning a level of aggressiveness that would make him one of the most polarizing talents in the world of auto racing. While there was no doubting Earnhardt’s driving ability, his tendency to do anything to win – including spinning out any car in his way – would land him in plenty of hot water throughout his career and bestow on him the nickname of “the Intimidator.” Winning his first points championship in 1980 – just a year after capturing the Rookie of the Year title, Earnhardt went on to six more championships and 76 race wins before being killed in a last-lap accident during NASCAR’s premier event, the Daytona 500 in 2001. Nearly fifteen years after his death, Earnhardt’s legacy still looms large over the sport of stock car racing, and it’s unlikely that that situation will change anytime soon. 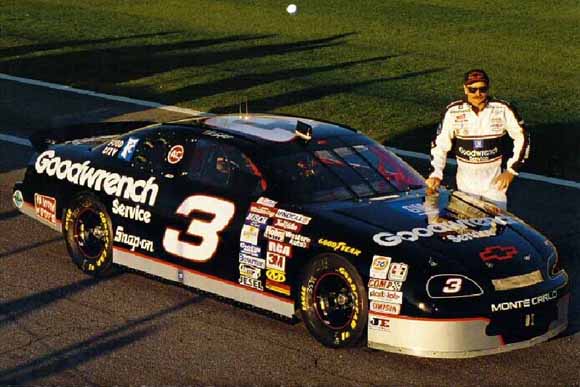 Dale and his famous #3 car.

Though he’s most identified as being the driver of the black number 3 car, Earnhardt started out as a journeyman driver who went racing primarily to provide for his family. The documentary certainly emphasizes the sacrifices that Earnhardt made in pursuit of his dream, and devotes a lot of time to discussing the hardships that he faced in his life. Knowing this information makes the material relating to his relationship with son Dale Jr., who started his own racing career in the late ‘90s and continues to race today, all the more heartwarming. Another major point of focus in the documentary is on Earnhardt’s talents as a entrepreneur: though perhaps an unlikely public figure, Earnhardt’s business savvy made him one of the most recognizable figures in the world of sport, largely through his own marketing of his “man in black” image.

Say what you want about his driving style, Dale Earnhardt had swagger.

Directed by Jeff Cvitkovic and highlighted by a combination of well-chosen archival footage and photographs, I Am Dale Earnhardt is presented in roughly chronological order and covers the most famous and well-known events from the driver’s storied career. Though I’ve distanced myself from stock car racing over the past fifteen years, I always like seeing footage of how things used to be back in the “good ol’ days” of motorsport. Covering such legendary events as the infamous “pass in the grass,” the 1982 Pocono flip, Earnhardt’s triumph at the ‘98 Daytona 500 after twenty years of trying, and even some of his heated confrontations with other drivers, the documentary was very enjoyable for me personally since I remember when many of these things took place. The dramatic scenes relating to Earnhardt’s fatal accident are quite moving and illustrate just how much he was not only loved by his fans, but respected by the NASCAR community as a whole.

Slinking out of a destroyed race car after flipping at Pocono.

As might be expected, the documentary also includes substantial commentary from fellow drivers Darrell and Michael Waltrip, Jeff Gordon, and Rusty Wallace, sports reporters Marty Smith and Jack Arute, pop culture figures like actor Michael Rooker (who played a character patterned after Earnhardt in 1990’s Days of Thunder), former MTV VJ Riki Rachtman, and filmmaker Morgan Spurlock, and even Dale Earnhardt, Jr., who today is by far the most popular driver in NASCAR. These interviews compliment the film footage nicely, and I appreciated the fact that the program went a long way toward explaining Dale Earnhardt the man, as he was away from the racetrack. Vintage interviews and conversations with the man himself provide an insight into Earnhardt’s mind, and a viewer really gets a sense of how his most rewarding moments in life took place when he was working on his farm or enjoying the outdoors with friends.

Despite his fearsome on-track reputation, Earnhardt enjoyed close relationships with many of his competitors.

Ultimately, the fact that Earnhardt was a “country boy” very much like the majority of the NASCAR fan base at the time earned him an incredibly loyal following, and I think one of the more interesting aspects of I Am Dale Earnhardt is the contrast between Earnhardt and other drivers of his era and the ones which populate NASCAR today. Over the past fifteen years, a sport that once was regarded as primarily a “redneck sport” has become much more polished and commercialized – one only has to listen to a contemporary driver interview and notice all the corporate sponsor name-dropping to see how the sport has evolved. Compared to a legitimately hard-nosed driver like Earnhardt who paid his dues and worked hard to get where he was, many of today’s drivers (even the so-called “bad boys” of the sport) seem like crybabies and whiners who have been handed the keys to the kingdom. Furthermore, in today’s high-profile, ultra-competitive motorsport, the team a driver is signed up with seems to matter more than actual driving talent, making it intriguing to ponder whether a rough-around-the-edges personality like Earnhardt would even get a shot at big-league stock car racing – or have a chance to truly shine – if he was trying to break into NASCAR circa 2015.

NASCAR has change significantly since Dale Earnhardt’s death, and I’m not at all convinced that it’s gotten better…

During the film, sports reporter Marty Smith relates a story in the film about how people have exclaimed that they can’t relate to NASCAR drivers in the wake of Dale Earnhardt’s death, which says a lot about this driver and his relationship to his sport. The “old school” nature of stock car racing quickly became extinct once Earnhardt wasn’t around, and NASCAR has never quite been able to compensate for his loss in my opinion. Even if I might complain that the documentary seems to gloss over some parts of the story and over-dramatize others, I Am Dale Earnhardt is in the end, very worthwhile: a treat for Earnhardt fans and a fine starting point for those either new to stock car racing or unfamiliar the driver that was arguably its most iconic personality. It might not have wide-reaching appeal, but this documentary provides precisely what a viewer would want and is right on par with ESPN’s outstanding 30 for 30 series. I’d have no problem recommending it.