US VERSUS THEM: AMERICAN SNIPER 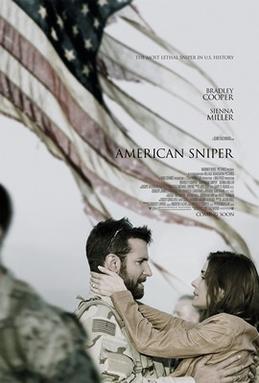 Cons: Emotionally flat and kinda pointless; is this film sending the wrong message to viewers?

It’s interesting to note how films dealing with the subject of armed conflict have a tendency to reflect the social values and popular mindsets of the time in which they were made. In recent years, several high-profile and undeniably well-made films have dealt with either the war in Iraq (The Hurt Locker) or the “war on terror” (Zero Dark Thirty for one), yet there appears to have been a conscious effort to present these films in as straight-forward a manner as possible without passing too much judgment on the events depicted in them. Many war films over the years have consciously or subconsciously promoted a more humanistic, “war is hell” sort of message, but modern Hollywood appears to be downplaying that message in an effort to appear more “patriotic.” Add the 2014 film American Sniper to that list. 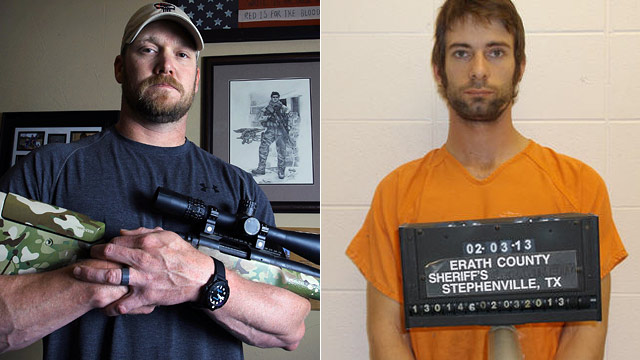 The real-life Kyle (on the left) and the disturbed young man who killed him in early 2013.

Directed by Clint Eastwood, the film is based on the admittedly amazing true story of Chris Kyle, a quintessential “redneck” who becomes a Navy SEAL sniper with the most confirmed kills in American history, and follows Kyle from his early days tooling around on the Texas rodeo circuit through four tours of duty in Iraq throughout the 2000s until his discharge in 2009. American Sniper starts off with a scene in which Kyle, sitting prone on an Iraqi rooftop peering through the scope of his high-powered rifle, spots a young child carrying a grenade towards a group of American ground forces. This scene sets up the inevitable struggle that Kyle faced throughout his tours of duty: how can a God-fearing, patriotic American justify killing 160 human beings in the defense of his country – and even mentally deal with the horrors of war in the first place? Unfortunately, while this basic idea is extremely relevant and undeniably interesting, it’s never handled in a manner which relates genuine insight.

Bradley Cooper looks and sounds the part playing Kyle – though I suspect the film tones down some aspects of his personality.

One might expect that the fault for this situation might fall on the shoulders of the actor who handled the central role, but this isn’t the case: to put it simply, Bradley Cooper (previously known mostly as a comedic actor in films like Silver Linings Playbook, American Hustle, and The Hangover trilogy) as Kyle is extraordinary.   As mentioned, we follow Kyle from a youth spent with a father who instilled in him a cut-and-dry view of the world, to his time as a stereotypical “country boy” through to his transformation into a “legend” of the armed forces, and there is a definite evolution of the character in the hands of Cooper. Kyle initially comes across as a genuinely warm personality who gradually loses touch with the real world due to his activities in combat, and American Sniper is at its strongest when depicting the effects of Kyle’s obvious but unspoken and debilitating PTSD. While it would be easy to go overboard when dealing with this sort of material, Cooper’s acting is gloriously restrained, saying more with a foggy and distant facial expression than would be possible with any amount of dialogue. The scene featured in numerous trailers for the film which finds a confused and completely spent Cooper talking to his wife from a dive bar is flawlessly performed and very nearly heartbreaking, showing just how broken Kyle the man has become.

One could easily draw comparisons between various scenes here (like this training sequence) and ones featured in earlier, better war movies like Full Metal Jacket.

Though the film is anchored by this strong performance, it stumbles numerous times when putting its disjointed and downright clunky script (which borrows a “battle of the snipers” subplot straight from 2001’s Enemy at the Gates) into action. Individually, there are some extremely effective scenes in the film, but the script (written by Jason Hall from the book by Kyle, Scott McEwen and James Defelice) never quite settles into any sort of rhythm, jumping back and forth between intense moments of combat on the ground in Iraq and awkward moments which finds Kyle attempting to reconnect and indeed reconcile with his long-suffering wife Taya (played by Sienna Miller). The abrupt, jump-cut transitions occurring throughout the film may be an attempt to replicate what is happening in Kyle’s mind (it’s very apparent that he feels more “alive” – and indeed thrives – when under duress on the battlefield and is completely lost when dealing with “normal people”), but it winds up disconnecting a viewer from the characters and events depicted. While there’s a significant amount of action and drama in the picture, the narrative is very jerky; I lost interest after awhile and eventually became bored.

Good thing Cooper effectively relates his character’s anguish – the script doesn’t do him any favors in spelling things out.

The fact that there doesn’t seem to be much of a point to the picture only added to my level of frustration. American Sniper simply tells the story of Chris Kyle, one which undoubtedly would appeal to the flag-waving crowd, and ends with a final scene that attempts some sense of foreboding but instead seems corny. I should note that Kyle’s eventual murder, which took place in early 2013 at the hands of a schizophrenic ex-Marine, is included as an epilogue to the film, with real-life footage of his funeral procession and ceremony being played during the end credits. Considering the powerful story, it’s really a shame that this film didn’t achieve substantial emotional resonance, but I could hardly think of a film that’s more disappointing and “flat” than this one. The writing seems downright lazy in this regard and the viewer leaves the picture having gained no perspective from having watched it.

The film’s examination of the costs of conflict is somewhat unsatisfying despite many eye-opening scenes.

Going into a film like this, I would have expected there to be some sort of underlying message or statement to be made, but Eastwood and Hall seem to have had no interest in really saying anything with this work. This more and more seems to be the norm in war-related films and other potentially controversial pictures of the post-9/11 era, and I think speaks to the fact that some people in Hollywood are wary of being labeled “anti-American” or “unpatriotic” if they were to make a film which hammered home the ultimate futility and tragedy of armed conflict or was too critical of the “establishment.” It seems to me that the ultimate purpose of a film like American Sniper is to act as an advertisement of sorts for the military or as a piece that would help “sell” the war on terror to the public. Eastwood’s film is borderline offensive in its portrayal of the Iraqi people and/or Arabs in general, with some material that would likely disgust (and probably rile up) the crowd this film was designed for. As might be expected then, it’s very much an “us versus them” film harkening back to the “good ol’ days” of war movies, and may as well be an updated, louder, more profane and much more violent “cowboys and Injuns” flick. Considering the film has, thus far, made some $500 million at the box office however, making it the highest grossing war film of all time, SURPRISE! America doesn’t much seem to care.

A viewer may as well assume that every Arab seen in the film is a would-be terrorist and/or militant. That probably plays into what the target audience would want to see, though it’s kinda sad.

Even if I was disappointed by the general ineffectiveness of the storytelling and lack of real insight into the characters, in terms of the actual production and technique on display, American Sniper is impressive. I wasn’t a fan of the way the story progresses, but the actual editing here is marvelous, heightening the intensity of the numerous action sequences. Equally crisp sound design completes the effect during these scenes, and I appreciated the fact that relatively little potentially manipulative music was introduced into the film – the opening and end titles for instance play out to absolute silence. Tom Stern’s photography has a noticeable starkness to it, looking particularly washed-out and grimy when depicting situations taking place in Iraq, and the overall production design is astounding with regard to creating seemingly authentic locations. In the end, American Sniper boasts an amazing true story, handsome production, and a strong central performance, but this is hardly an outstanding or even good film, seeming to be the product of a writer and director going through the motions and covering the same ground that’s been explored before. I don’t think the film would appeal across the board to more discriminating viewers, but it’s worthwhile as populist, crowd-pleasing entertainment.

10/10 : A continual barrage of harsh profanity

3/10 : Fairly straightforward, and actually somewhat dull in the long run despite the strong central performance.