LEGEND OF THE SUPERSTITION MOUNTAINS on History Channel

Pros: The myths surrounding this mountain range are fascinating…

Cons: …but watching a group of half-assed treasure hunters struggle through them is not.

In the past couple of years, History Channel seems to have decided that America Unearthed could be used as much as the next show as the inspiration for a whole lineup of new programs (to be honest, after a block of shows more or less inspired by Ancient Aliens, the change is not entirely unwelcome). 2014 saw the debut of The Curse of Oak Island and Search for the Lost Giants, a pair of reality television programs that played more like protracted treasure hunts than genuine documentaries. That trend has continued into 2015 with the February premiere of Legend of the Superstition Mountains, a show in which a group of would-be prospectors head into the Arizona desert in search of the infamous Lost Dutchman gold mine.

takes its name from a 19th German immigrant named Jacob Waltz, who supposedly stumbled upon an incredibly rich mine, which may have originally belonged to a group of Mexican prospectors, in the mountainous desert east of Phoenix. After a deathbed confession in which Waltz revealed cryptic clues about the whereabouts of the mine, various adventurers made it their goal to find it, using an odd stone map as a guide or at least, starting point. Many of these adventurers never returned – Indian attacks, mysterious disappearances, and general mayhem loom large in the mythology of the Superstition Mountains and the mine reported to lie within them. Though many historians have disputed various facts relating to the mine’s existence, interest in this lost treasure has persisted to this day…which is where the new History Channel program comes in.

The grave of the lost Deutschman himself, Jacob Waltz.

Essentially a replication of the basic formula of The Curse of Oak Island, Legend of the Superstition Mountains follows an eclectic team of would-be treasure hunters on their search to discover the location of the gold mine. Leading the expedition is Wayne Tuttle, who has been researching the mine for decades. Though somewhat wary of recruiting others join him, for the purposes of the program, Tuttle has enlisted the help of police detective-turned-treasure hunter Frank Augustine, seasoned gold miner Woody Hampler, self-proclaimed “rock hound” Eric Deleel, and “tech expert” Eric Magnuson. Because, you know, a show about a single dude looking for gold would be boring. Inevitably, conflict arises among the team (in the first episode, the main problem seems to be Woody’s frail physical condition, which makes the hike into the remote wilderness increasingly difficult), but the show also (perhaps over-)emphasizes the potential lack of trust between Tuttle and Augustine. Augustine has in his possession a replica of a “tesoro map” which he believes will lead to the treasure, but whether or not anyone can believe his claims that various landmarks the team encounters are the same ones apparently referenced on his map is anyone’s guess. 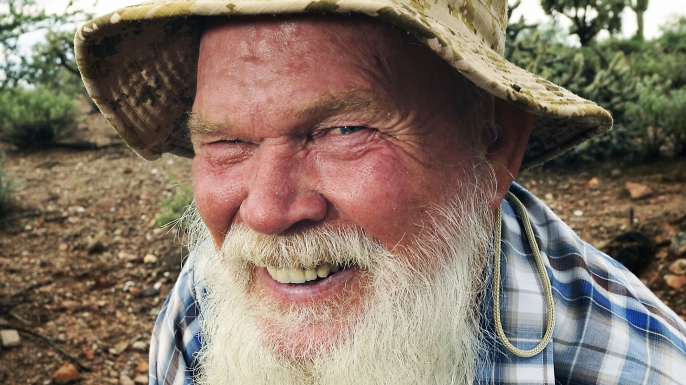 Despite some striking physical similarities, even the show’s “wildcard” character Woody don’t got nothing on the genuinely disturbed but somehow entertaining Face from Alaska Monsters.

Like most of History Channel’s pseudo-documentary reality shows of recent times (Oak Island and Lost Giants in particular), Legend of the Superstition Mountains is likely to get really good only when something of legitimate value is discovered. Walking around in the desert speculating about what may lie over “that there ridge” can only sustain viewer interest for so long and this program isn’t nearly as outwardly entertaining as the clinically moronic likes of the typical monster hunt show. Superstition Mountain’s first episode culminated in the team locating the “heart-shaped rock” depicted on the tesoro map – which Augustine promptly declares as having a carved ‘X’ on it. This whole scenario left me more than a little skeptical – and not only because the rock didn’t appear to me to look “heart-shaped” at all. In the same way that a group of morons literally bumping uglies with various legendary beasts on shows like Mountain Monsters seems blatantly fabricated, it seems very unlikely that a team of half-assed adventurers (who supposedly have been searching for the Lost Dutchman mine for decades) would miraculously stumble onto the correct location of the treasure now that a TV crew has been entrenched with them. Also, if they found the mine that quickly, it wouldn’t make for much of a series, would it? 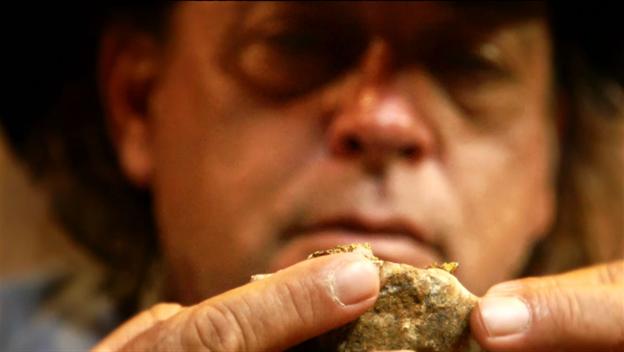 Hey, put that down! We can’t find gold until at least the season one finale!

In the same way that the Curse of Oak Island show constantly reminds a viewer of the curse which supposedly dictates that “one more will have to die before the island reveals its secrets,” Legend of the Superstition Mountains makes sure that a viewer is well-aware of the bloody, mysterious history of the region. This tendency reaches an almost ridiculous level when the producers decide to include occasional, numbered “Mysterious Death” segments in which we’re told about one or another person who died while searching for the treasure. Since there’s no hard evidence to back up any of these stories, I think taking them with a grain of salt is probably the best option: traversing the Arizona desert can be hazardous for any number of reasons, most of which probably have precisely nothing to do with any sort of “curse.” You’ve got to hand it to the show’s producers though for making what could have been a pretty tiresome, bland program as sensational as possible – History’s team of video editors have their reality TV formula down pat at this point.

The whole gang settles down for a little fireside chat.

Even if this series would be at least somewhat worthwhile if the team does in fact eventually find treasure, for the time being, we’re left with a slickly-produced but undeniably manipulative show that pushes a viewer’s suspension of disbelief – to say nothing of his patience – to the breaking point. Like The Curse of Oak Island, the basic premise of Legend of the Superstition Mountains simply doesn’t seem all that compelling – not when individual episodes would likely revolve mostly around a rather dull group of guys hiking through the desert bickering about what may be “out there.” The presence of the camera crew tells me that the sense of danger in the program has been greatly exaggerated – I really doubt anyone is going to run out of food or water or be attacked by mountain cannibals – and since there’s virtually no honest evidence backing up any of the program’s claims, most viewers would undoubtedly be better off waiting for a Eureka moment which may or may not ever actually turn up. Fascinating though the myths of the Superstition Mountains are, this reality show based on them is strictly par for the course – a passable time-waster perhaps, but perfectly skippable.