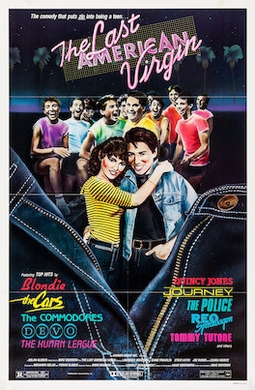 Pros: Good-natured, raunchy fun, with a lot of nudity and a memorable ending

Perhaps one of the more unduly overlooked ‘80s teen comedies, 1982’s The Last American Virgin plays out in much the same manner as the same year’s classic Fast Times at Ridgemont High – this despite the fact that Virgin is a remake of a 1978 Israeli film (Eskimo Limon, a.k.a. Lemon Popsicle). As might be expected, LAV follows the exploits of a group of hornball high schoolers in Hollywood who, in between classes and menial jobs, are looking to score with any number of available females. The main character here is the awkward and sensitive Gary, who’s fallen for Karen, the new girl at school. Karen barely seems to notice Gary – she has her sights set on Gary’s more suave buddy Rick – until she’s left high and dry after Rick knocks her up. Could this be the chance that hard-luck Gary needs to win over the love of his life?

From left, Gary, Rick, and David – out to get laid and loaded.

Even if writer-director Boaz Davidson (who also was at the helm for the original Israeli version) isn’t really venturing into unknown territory with his basic story, The Last American Virgin certainly offers up the sort of raunchy content one would expect from this type of film. Rick, Gary, and their friend David get themselves into all sorts of goofy predicaments while partying as much as possible and trying to get laid. An encounter between the trio of teens and a sex-crazed Spanish woman, for instance, turns ugly when the woman’s not-so-friendly sailor boyfriend decides to show up at about the worst possible moment, and the trio is forced to take extreme measures to get rid of crabs contracted from an especially trashy prostitute. Par for the course in these types of movies, there’s also an isolated batch of scenes taking place in school, including a wager to see who has the biggest “tool” in the boys’ locker room.

Just when one thinks this film is all about the lowbrow content, however, things get real in its final third, when Karen winds up pregnant after being dumped by Rick. Honestly, the whole Rick-Gary-Karen situation in Last American Virgin is remarkably similar to the material relating to Mark Ratner, Mike Damone, and Stacy Hamilton in Fast Times at Ridgemont High. It’s interesting then to note that Davidson’s film actually beat Fast Times… to theaters by a few weeks and was based on a story that, in 1982, was already four years old.

OK, so the movie’s a little raunchy, but that’s to be expected from an ’80s teen sex comedy.

That said, in my opinion, Fast Times… seems a more authentic representation of teenage life in the early 1980s. By comparison, Last American Virgin seems exaggerated and not nearly as poignant. At least part of that is due to the caliber of acting in the film: Fast Times showcased an impressive array of up-and-coming actors and actresses in the roles that would put them on the map, and although I could tolerate the performances of Steve Antin (as Rick, who increasingly seems like a total scumbag as the film progresses), Joe Rubbo (as the “fat kid” David), and the stunning Diane Franklin (as Karen), Lawrence Monoson, who plays perennial underdog Gary and easily has the most screen time in the picture, doesn’t quite seem credible – especially during some key moments. I certainly could relate to Gary’s frustrations when watching his would-be girlfriend go for the sleazy womanizer instead of the genuine “nice guy” (i.e. him), but Monoson’s idea of putting some genuine feeling into his performance involves talking quietly in a wavering voice while putting on an “abandoned puppy face” – and just doesn’t work. Thus, right when the film should be tugging at a viewer’s heartstrings, things fall apart. 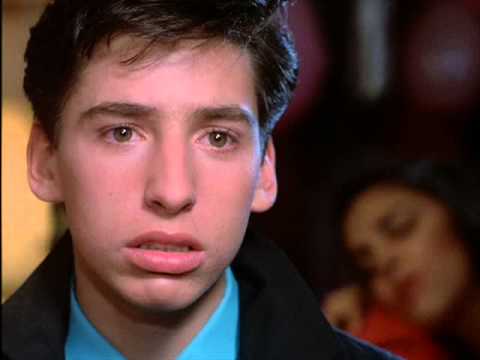 Better get used to that quivering lip expression from Lawrence Monoson – it’s seen quite often throughout the film.

Above and beyond the acting, Davidson’s handling of the picture has other problems, namely the fact that instead of seeming like a coherent, evolving story, his film plays like a series of mostly disjointed vignettes, few of which seem to have any serious ramifications for the characters. After the carefree opening half, things eventually do gel late in the going when the major dramatic element of the film becomes apparent, but the shift in tone is so abrupt that it’s somewhat difficult to buy into the legitimate consequences that arise. Furthermore, The Last American Virgin quite often seems like a glorified music video since the prominent soundtrack (which includes some fabulous tunes from the likes of U2, The Police, Devo, The Cars, Oingo Boingo and others) is carefully matched up to the onscreen action. Unfortunately, this only further accentuates the sense of fragmentation present in the script; sure, the music is cool to jam out to, but it winds up being distracting and ridiculously overbearing since there’s nary a moment here when one popular song or another isn’t blaring. I’ve also got to say that the repeated renditions of Journey’s “Open Arms” used to punctuate the love story between Gary and Karen become very corny, very quickly. 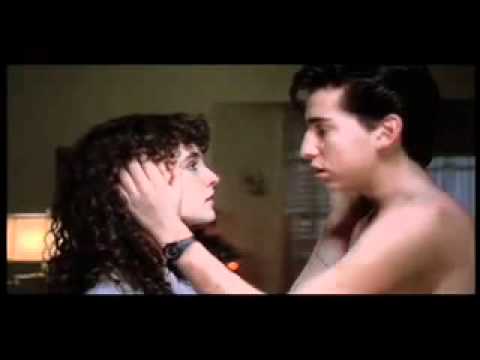 Banking on a happy ending? You might wanna think again…

Considering all of the potential problems, I was genuinely surprised when I enjoyed this picture much more than I ever thought I would. Frankly, it’s refreshing every once in a while to see a genuine, decidedly R-Rated sex comedy from this (pre-AIDS) era, since these sorts of films were made in a much different manner than they would be today. The level of mischief present never quite clashes with the film’s generally good-natured vibe, and it definitely provides a window into a time and place far different from the one that viewers are faced with in their everyday life. While Fast Times at Ridgemont High is famous for the (mouth-watering) scene in which Phoebe Cates strips off her bikini top, Last American Virgin delivers a few “cha-ching!” moments of its own: there’s quite a bit of female nudity here, including a substantial amount from gorgeous leading actress Franklin. Finally, I’d be remiss if I didn’t point out the cynical ending, one which is likely to polarize viewers. I happen to like a lot: after playing like any number of other rowdy sex comedies for 85 minutes, LAV kicks a viewer in the balls in the last five – as real and shocking a conclusion as could ever be imagined in a film of this nature. Even if it deserves some amount of criticism for being told from a very male-centric point of view, considering what the typical viewer going into this film would want, The Last American Virgin delivers in a big way – even if it’s more a situational comedy than laugh-out-loud funny. I’d recommended it.

Released in several multi-movie packs and as a with 1983’s Losin It. MGM’s is a dual-format wide and full-screen disc with no extras.

1/10 : Some thematic material related to serious issues, including abortion

8/10 : An assortment of nudity from some very nice-looking women; plentiful sexual content

7/10 : Strange that while Porky’s and Fast Times… went on to achieve legendary status, this surprisingly decent flick has been all but forgotten – it’s certainly worth rediscovering.

“Crabs – at your age! Young people – they ain’t what they used to be…”

Music dominates this trailer (and the film itself):