Pros: Allison Hayes! A few moments both comical and creepy

Cons: Clumsy script never is able to build adequate (or really, any) suspense

An old-school zombie movie if there ever was one, 1957’s Zombies of Mora Tau deals with a group of American treasure hunters trying to recover a cache of diamonds from a shipwreck located just off the African coast. The financier of the operation named George Harrison (rimshot please!) and his wife Mona have been joined by a professional diver named Jeff, who’s job it is to actually bring the stones to the surface, and a doctor who’s planning on writing a book about the whole thing – but they all get more than they bargained for when it becomes apparent that tales of a curse surrounding the diamonds are true. The sunken treasure is protected by a group of undead sailors who went down with the vessel in the first place, and these zombies cause problems at every turn – not only for the dive itself, but also for the obligatory romance that starts up between Jeff and a local girl named Jan Peters, whose elderly grandmother is the only one who seems to know how to control and defeat the zombies.

Though the creatures are decidedly non-threatening, several sequences involving the zombies are actually pretty neat.

Directed by Edward L. Cahn (longtime director of short subjects and B-movies who would make IT! The Terror from Beyond Space the following year) from a script by George H. Plympton and Bernard Gordon, Zombies of Mora Tau suffers considerably from not having enough action or suspense to fill even its thankfully brief 70-minute run time. The picture doesn’t waste time dropping a viewer into the fray right off the bat, but doesn’t quite seem to know where to go from there since it’s built around a predictable, clumsily-concocted scenario into which nary a smidgen of logic seems to intrude. Though I was moderately impressed with some of the sets and locations seen in the picture (the jungles actually look pretty convincing) and found the way in which the production managed to create the illusion of underwater sequences without leaving the studio to be clever, any semblance of technical quality is undermined by a nearly endless string of poorly-executed day-for-night shots, to say nothing of the disconnected insert close-ups that positively ruin the continuity of any and all underwater sequences.

As everyone knows, underwater fist-fights will never be as cool as a real zombie attacking a fake shark…

One of (if not) the only reason why Zombies of Mora Tau has achieved some semblance of a cult following over the years is because it features Allison Hayes in a major role. Best known for starring in the title role of 1958’s trash classic , the voluptuous Hayes was a one-time model who eventually made her way to Hollywood only to be featured in a string of low-budget genre flicks and television productions before some incredibly unfortunate health problems cut short her career. Though Hayes never quite achieved a breakthrough moment that would have made her a star, she’s managed to attract a cult of admirers none the less due to her undeniable sex appeal and the fact that all her performances are downright fun to watch. This is certainly the case with regard to her work in Zombies of Mora Tau in which she plays the devious Mona.

Cackling and barking out her lines while threatening to literally bust out of the tight tops she’s wearing, Hayes (whose character “learned her manners as a hostess in Eddie’s Front Street Saloon”) is front and center for all the film’s best moments, carrying on a sort of war of words not only with her aloof husband George (played by Joel Ashley) but also the wholesome Jan (a part performed by the wide-eyed Autumn Russell). Eventually Mona, chest heaving as she hyperventilates and scowls, comes to blows with her husband (George explains that he’s giving her “the only message she understands…”), yet no one seems to mind the peace and quiet provided when she vanishes from the narrative for a few minutes. Once the writers realize they need some sort of conflict down the stretch (this before a tiresome climax and plain dumb ending), Mona re-emerges when it becomes apparent that she now (duh!) needs rescued from the zombies’ underground lair. Again, no one is ever going to confuse this film with a masterwork in terms of its script development. 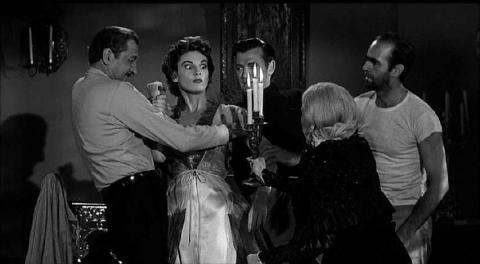 Nope, this is not quite the suspenseful masterpiece one would want…

Try as Hayes might however, nothing can save this film from the fact that it’s never, ever suspenseful. Downright creepy shots of the zombies amassing in their dark, subterranean catacomb or stumbling out of an otherwise tranquil lake are utterly wasted when it becomes clear that these beings (who universally appear stone-faced and glassy-eyed) are not threatening in the least – not even the one with the pro wrestler physique and horseshoe haircut and not even when they’re engaging in slow-motion underwater fist-fights. It’s never quite revealed how these zombies could/would eliminate their enemies (or why in the hell they’d want to kidnap either of the two women apparently just to throw them on the cold, dirty floor of their crypt), yet a viewer is supposed to buy into the hysterical fits of fear that these “fiends” inspire in their supposed victims. Sorry, but it just doesn’t work, and the purported highpoints of this film are further mitigated by a dull soundtrack from Mischa Bakaleinikoff. On the other hand, the film’s “action scenes” do occasionally offer up a bit of amusement, such as when Gregg Palmer’s heroic Jeff character receives a couple of stiff, clubbing overhand blows from the aforementioned “Horseshoe Haircut Harvey” ghoul or when Captain George finds out that zombies will “no-sell” any amount of punches coming their way.

Sad thing is, I had a similar glassy stare by the time this flick was over…

OK, you got me. I’m pulling for straws on this one: there’s really not that much here, even for those who get a kick out of bad movies. The somnambulistic “Zombies of Mora Tau” can’t hold a candle to the cannibalistic ones which would appear and positively dominate movie screens from the late ‘60s onward. That said, I could think of worse ways to spend 70 minutes than watching this overwhelmingly mediocre but nevertheless agreeable ‘50s “shocker.” It’s not quite on a level with the best of the worst films out there, but those who would watch something like this in the first place may just find it to be an acceptable time-waster. 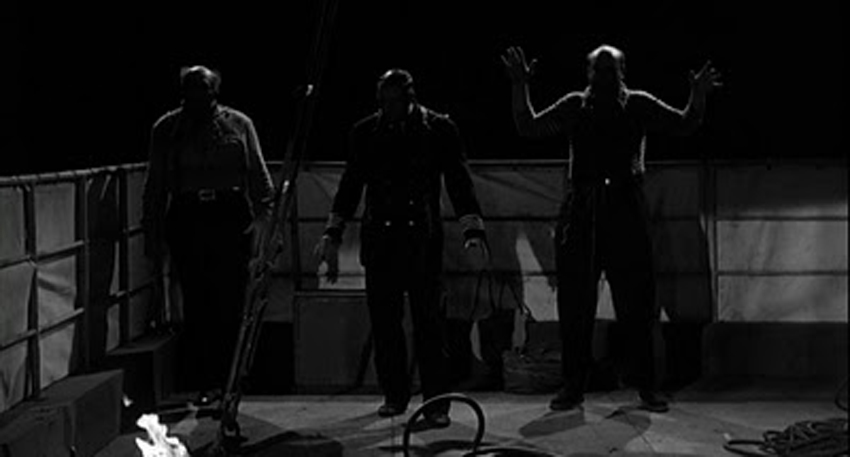 Released as part of Sony Pictures’ Sam Katzman: Icons of Horror Box Set. This package includes a trio of other schlocky gems: 1955’s Creature with the Atom Brain, 1957’s The Werewolf, and arguably the cream of the crop, 1957’s The Giant Claw. All four films are presented in full-frame format, with a variety of trailers and a trio of short subjects as extras. While this set would have precisely no appeal to those looking for good movies, it would be most enjoyable for fans of jaw-dropping B flicks.

2/10 : A knife to the throat of a zombie has little effect and produces no blood

1/10 : No profanity, but plenty of bad attitude

2/10 : Allison Hayes parading about in some of the tightest sweaters imaginable

3/10 : Sure, it’s a zombie flick and it does have amusement value, but most people will find this to be dull.

“Only fools are afraid of the grave…there are worse things…”

…or watch the whole damn thing (with intro by Robert Osborne!):