Cons: Cast is a mixed bag at best; complete lack of original ideas

Picking up more or less right where the previous year’s seminal Friday the 13th left off (to the point where it begins with the sole survivor of that film being stalked by an unknown prowler), 1981’s Part 2 of the series plays like a slightly more accomplished version of the first film. Some five years after the massacre at Camp Crystal Lake, whose nickname of “Camp Blood” is becoming more and more appropriate, another group of summer camp counselors is headed out to the area to receive instruction for the upcoming season. Things go along pretty well at first, with the prospective counselors taking part in the typical tomfoolery one would expect from a group of rowdy -and horny – young people. Soon it becomes apparent however that the legend of Jason Voorhees, the young boy who drowned at the camp in 1958, may be true after all since one by one, the counselors are bumped off a hulking madman. This sets up an ending which recreates that of the original film – with a few twists thrown in to spice things up.

What is this – Jason as some sort of demented “farmer in the dell” with his burlap sack, overalls, and pitchfork?

Directed by Steve Miner from a script by Ron Kurz, Friday the 13th Part 2 is most notable for being the film which actually introduced the masked killer Jason Voorhees (who in this film, wears a burlap sack over his head, not his trademark hockey mask) into the lexicon of the series, thereby setting up a seemingly endless number of additional sequels. What’s sometimes overlooked with regard to Part 2 is that Miner’s handling of the all-too-familiar (if not virtually identical) material proved that he was a significantly more inspired and talented film maker than Sean S. Cunningham, creator of the franchise who was at the helm for the first film. Cunningham’s original Friday was nothing if not extremely crude, yet it was entirely effective at creating an atmosphere of dread and a sense of unease in the viewer. Miner’s film (photographed by Peter Stein) goes a step further by actually being comparably accomplished in terms of its technical aspects. 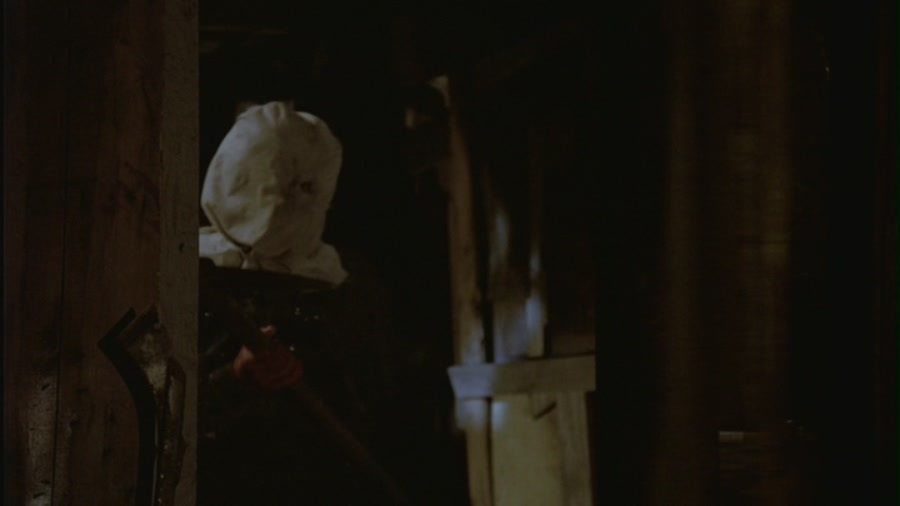 Crazy farmer or not, the film actually has some effectively tense stalking and/or pursuit sequences.

The film is loaded with voyeuristic camera angles, giving the viewer the perspective of the film’s villain/murderer as he stalks his prey. I could almost be led to believe that director Miner had some knowledge of the hideously gory Italian horror movies of the 1970s: one pursuit sequence reminded me of a superbly-executed scene from 1973’s Torso in which a half-naked young woman is pursued through a swamp by a shadowy masked man. The corresponding scene in Miner’s film starts off with the appearance of an almost spectral hooded figure and continues with a somewhat jarring chase through a particularly lush section of forest. Another pursuit leading up to the film’s climax makes nice use of shadow to build tension, and I really liked a scene in which Jason appears almost phantom-like from the darkened corner of a shot set-up to violently attack a young man as he roots around in a cabin. Harry Manfredini (who also scored the first film) turns in another outstanding soundtrack, with pizzicato strings and the famous “ch-ch-ch-ha-ha-ha” sound effectively ratcheting up the suspense when appropriate. 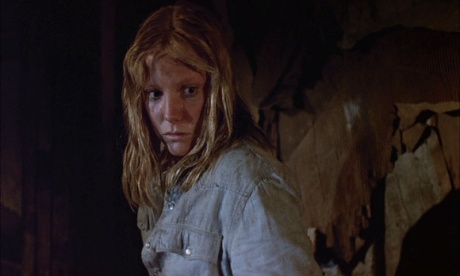 This film’s main character of Ginny (played by Amy Steel) is arguably the best heroine of the entire series.

All the technique in the world wouldn’t amount to much if this film didn’t deliver as a vintage ‘80s slasher flick. Though it’s lost a lot of its punch over the years (as is true of many films of this era, casualties of the “overkill” method that most modern genre directors employ to satisfy an increasingly bloodthirsty audience), I’d say Part 2 delivers in this respect. A viewer can expect assorted stabbings and throat slashings, an ice pick to the temple, claw hammer to the skull, and even a pair of bodies impaled with a spear while in the act of lovemaking (a method of execution borrowed from Mario Bava’s Italian-made Bay of Blood). Without giving anything away, I’ll say that my favorite kill involves one unfortunate youngster taking a machete to the face, then bouncing down a flight of stairs – you’ll know it when you see it.

What’s perhaps most surprising about this film is that this (along with most of the other Friday the 13th films) was in danger of receiving an ‘X’ rating when released due to strong violence and had to be edited down to get the ‘R’. While even rather harmless when compared to the likes of 1980’s X-rated (for violence) Maniac, viewed today, Part 2 looks like Sesame Street alongside most modern horror films or even a remarkably gory non-horror picture like Django Unchained – it blows my mind that this studio-backed Tarantino picture passed with an ‘R’ while numerous comparably less violent or downright incendiary indie films often wind up facing the wrath of the MPAA. That’s the politics of the movie biz for ya!

Can you imagine how this scene would be filmed today?

Even if Part 2 is an improvement in terms of its technical qualities, there’s no denying that many of the actors in the film are sketchy at best. Amy Steel as the obvious heroine of the picture does a fine job (remember – she’s a psychology student; this helps explain the climax), but some of the lesser players are downright awful. The likes of Marta Kober and Bill Randolph (as the mandatory promiscuous couple), Russell Todd and Stu Charno (the jokers of the bunch), Tom McBride (the boy in a wheelchair), and Kristen Baker (who provides the film’s shimmering moment of gratuitous frontal nudity) are little more than anonymous cannon fodder ready to be slaughtered. It’s funny when watching some of these classic slasher flicks that a viewer winds up rooting for the “villain”: the sooner he kills these kids, the faster it is that we no longer have to be annoyed by them and their pointless subplots. Friday the 13th Part 2 is not even close to being the worst in the series with regard to having thoroughly unlikable characters served up as murder victims, but it’s bad enough anyway.

Oh look – it’s another group of characters no one cares about.

As history turned out, Friday the 13th Part 2 made a small fortune on a minimal investment for Paramount Pictures (the magic of the slasher film!), paving the way for Parts 3,4,5,6,7,8, and beyond. It’s alarming noticing how downright tame this film is compared to modern bloodbath horror, a fact which speaks volumes about the level of desensitization that has taken place in the three-plus decades since the film’s release, but there’s no denying the role that Part 2 had in building up unstoppable killer Jason Vorhees as an iconic, instantly recognized figure. While most “respectable” critics dismiss these films straight away, at their best – and Part 2 is certainly one of the better Friday the 13th sequels – these films provide exactly what a viewer would want, and thus, are perfect popcorn flicks.

… just remember … Jason’s out there …

There are a ton of different Friday the 13th packages available, including several multi-film packs (including the 5-disc I have and a newer ), and various standalone discs. One would think, considering the popularity of the series, the money the studio has made from this franchise, and the sheer number of different home video releases, that Paramount would put some effort into these packages, but that by and large doesn’t seem to be the case. An “ideal” home video release of Part 2 (which in my mind would include the much-discussed deleted scenes and some supplemental featurettes directly related to this series entry) doesn’t truly exist. The so-called (which includes various featurettes relating to the series in general) is probably the best stand-alone disc to pick up if you don’t get a multi-film pack.

7/10 : Sure, there are quite a few sometimes brutal kill scenes in this flick, but the actual level of gore is fairly low – especially compared to what one would encounter in today’s horror cinema. 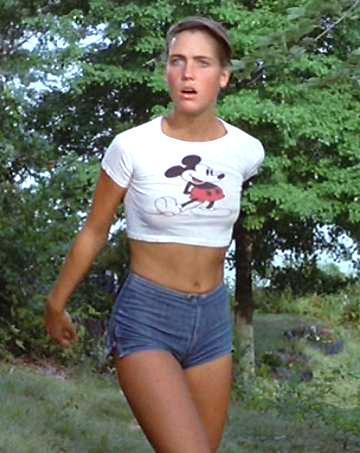 6/10 : Rowdy teens getting frisky, one sex scene, assorted innuendo, and a huzzah moment of full-frontal nudity from a female skinny-dipper

7/10 : One of the better entries in the series, with accomplished technique making up for an utter lack of originality.