FANTASTIC FOUR, VOL. 5 (MARVEL MASTERWORKS) RETURN OF THE FRIGHTFUL FOUR, AND THEN GALACTUS.

Cons: Slight cliffhanger at the end arousing curiosity for next book

The Thing has just finished defeating Dr. Doom but at the cost of being trapped in his monster looking form. He leaves the Fantastic Four angry and heavily depressed, which soon makes him easy pickings for another outfit. -summary Many people feel that the legendary duo of Stan Lee and Jack Kirby caught their creative stride with the now Marvel Milestone, The Coming of Galactus. I will admit that storyline was indeed a high point not only for the Fantastic Four but Marvel and comics itself, because this is when Marvel pretty much ran things and became rather invincible in the comic book world. I personally feel Lee and Kirby “got it right” several issues before the Galactus Trilogy, and it all started with their, at this point, recent encounter with Dr. Doom and especially The Frightful Four. The sinister group which was made up of the Wizard, Trapster, Sandman, and Medusa not only gave the Fantastic Four a run for their money, but they managed to beat them. This collection of stories pits the FF against their evil counterparts once again along with more exciting conflicts. This is a really good TPB. This book collects Fantastic Four issues 41 – 50.

The story begins with the Thing being captured by the Frightful Four, which quickly puts the Wizard’s plan into action. This begins a multi-issue arc where things really look bad for the Fantastic Four. These issues are comic book writing at its best; full of suspense, great character interactions, and plenty of action. I will also point out that this was a great change of pace for the Sandman, because this bolstered his arch-enemies gallery as he was constantly fighting Spider-Man at this point. His powers were a true threat against the FF. He would later go on to battle the Hulk as well. 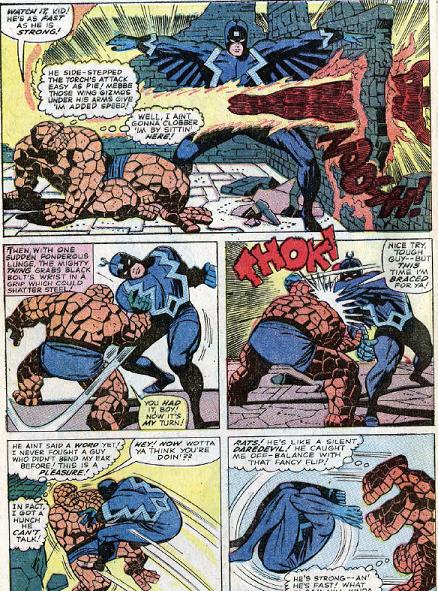 These issues are also very important and memorable since they debut the Inhumans, in which this managed to provide some background for Medusa. Although I was never completely sold on this group; they did have some interesting members with Black Bolt at the top of that list, plus he and Crystal would enjoy some spotlight over the years. There’s also a really good confrontation with Dragon Man, and finally Galactus and The Silver Surfer would make their first appearances, with Galactus’ intentions set on devouring the Earth.

These stories are too good if one can get over the aged feel of them; and Kirby’s artwork showed some nice improvement. The action panels were very intense, with the Thing going at it with Black Bolt and also Dragon Man. The Frightful Four confrontation was a joy to watch, plus Kirby’s character designs overall had a nice bit of imagination. 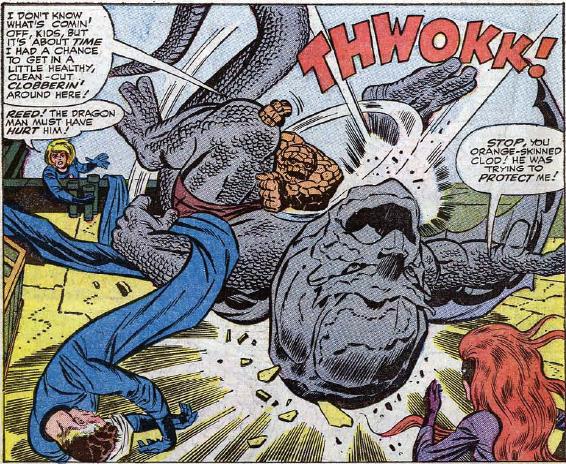 These issues were fun for me to read, and I would recommend this TPB to any hardcore Marvel fans. It also isn’t a bad place to start but I would also advise to pick up the previous volume as well. This era is indeed one of Marvel’s highlights.