AVENGERS: LEGION OF THE UNLIVING – EARTH’S MIGHTIEST LOCKED UP WITH THE POWERFUL UNDEAD.

Avengers: Legion Of The Unliving

Kang the Conqueror is locked in battle through space and time with his future self Rama-Tut. The Master of Time Immortus pulls the two into his realm of limbo. Then he forms an alliance with Kang to plot against the Avengers. Kang uses Immortus’ technology to not only bring the Avengers to limbo, but also pull dead individuals from various points in time to form his Legion of the Unliving. -summary

Avengers: Legion of the Unliving is a pretty good book for what it’s worth that features different incarnations of the team battling various versions of the Legion of the Unliving, whom was first created by Kang The Conqueror. The purpose of usually bringing back the dead to fight the Avengers is to match them against powerful adversaries whom had once before caused them problems or opponents capable of defeating them, and also reduce their combat effectiveness through the shock of these encounters, as almost always they will be up against former Avengers whom were lost in battle. Over the decades these encounters would actually become better due to being more and more personal. When looking at some of these stories, it’s best to ignore all of the long running storylines that were going on at the time, and focus on the battles due to each running arc at that time being left completely unfinished. The first story is definitely something to focus on the action, because this takes place during the Celestial Madonna story arc, and this is left completely unfinished and doesn’t offer too much outside of Kang meeting Immortus for the first time. There is some really good action to be found here though, such as Iron Man taking a beating and an angry Thor seeking some revenge. The story with the absolute best action takes place in the Avengers annual; they battle against a powerful cosmic being The Grandmaster. He was able to trick Death and still her powers; this leads to him creating several bombs capable of destroying entire sections of the galaxy. He splits the West and East Coast Avengers into small teams to destroy his bombs, which are guarded by The Legion of the Unliving. This is by far the most brutal encounter with action all over the place.

Fear the Reaper is a three part story that isn’t as action packed, but it’s definitely the most ambitious story in the book. The Grim Reaper had recently returned from the dead and he developed supernatural powers. This story is completely different in style utilizing the horror element. This story is actually pretty creepy and the Reaper is indeed very twisted and evil. There are two more stories left with one focusing on the Reaper again written by Kurt Busiek. It’s quite story driven but it’s mainly remembered for its ending and the further evolution of the Scarlet Witch’s powers. 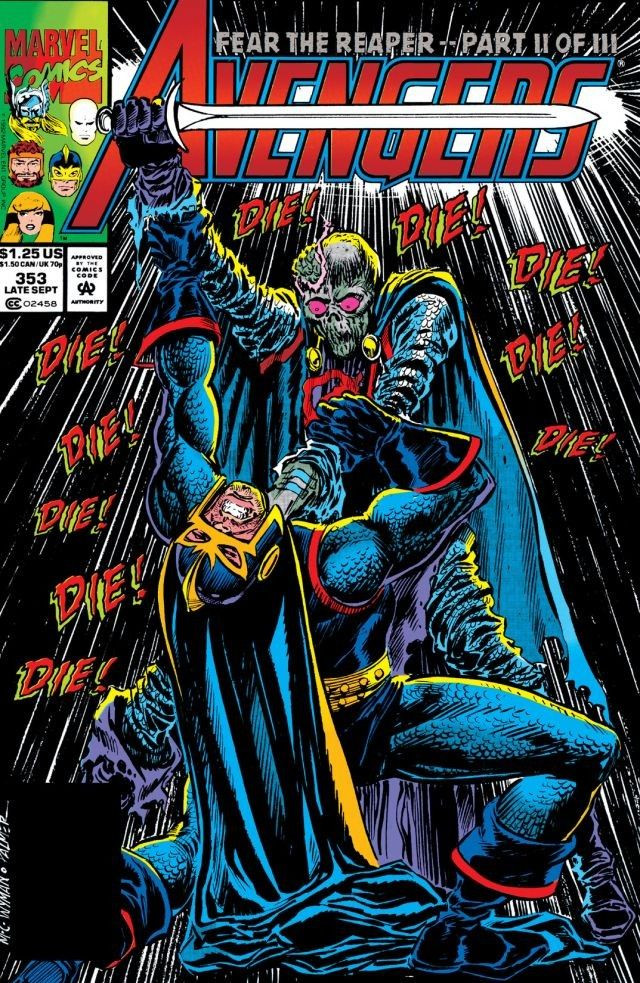 These stories really are enjoyable and if anything someone unfamiliar with the Avengers would more than likely want to dive in further. Some of the characters have just enough development to make these stories interesting; but I can imagine fans of the team enjoying them a lot more. The artwork has several stand out moments, with the Avengers annual looking really good with some nice character designs. The 80’s really did have a very attractive style and it shows. The action panels in that issue is full of really good clashes resulting in some bone crushing action. Wonder Man and Hyperion, along with She-Hulk duking it out with Drax the Destroyer quickly comes to mind. Fear the Reaper is very dark and atmospheric, with the feel of death through out the caverns. There’s a feel that at least one Avenger is going to die in this encounter.  It’s some pretty awesome stuff. Overall I would say this is title that I would recommend, but it’s not something to run out for unless you’re a hardcore collector. The best advice I can think of for a new comic or Avengers fan, is to read several other finished Avengers titles in order to get to know these characters. These are some really good books to start off with, Avengers: The Bride of Ultron, The Korvac Saga, Under Siege,  Assault on Mount Olympus, and Ultron Unlimited. If these storylines can’t turn a person into an Avengers fan, then I don’t think anything can.