AN ENJOYABLE BUT UNNECESSARY CHRONICLE OF PRO WRESTLING’S WORST: WRESTLECRAP BY R.D. REYNOLDS

Cons: Doesn’t quite live up to its billing  – imagine that!

Spotlighting the all-around worst the world of professional wrestling has to offer, the was launched in the year 2000 and has gone on to achieve increasing notoriety and recognition over the years despite some sweeping changes and periods of inactivity. The site’s main claim to fame may be its annual “Gooker Award” (named after the infamous ) in which the year’s most asinine gimmick, storyline, or event is recognized, but co-founder R.D. Reynolds (the wrestling pseudonym of Randy Baer) has also branched out to author several books based on the content of the site.

Tugboat – the wrestler who thought he was a boat – yes, just about anything goes in the whacked-out world of pro wrestling…

Though it may sound like an all-encompassing examination of pro wrestling’s low points, Wrestlecrap: The Very Worst of Pro Wrestling (published in 2003 by ECW Press – which has no connection to the wrestling promotion of the same name) is, in fact, something slightly different. Though it does chronicle numerous wacky and/or jaw-droppingly awful personalities and situations from pro wrestling’s history, the book devotes a substantial amount of its pages (I’d estimate almost half) to the period of the so-called “Monday Night Wars” when Vince McMahon’s World Wrestling Federation (now called the WWE) went head-to-head with Ted Turner’s World Championship Wrestling – in large part through their respective Monday Night Raw and Nitro television programs which played weekly in the same time slot. A veritable who’s who of Wrestlecrap!

Focusing on this period of wrestling history can either be viewed as a good or a bad thing. On the plus side, this era will be fondly remembered by fans as the time when performers such as Goldberg, Steve Austin, The Rock, Mick Foley, and Triple H really came into their own while more established names like Bret Hart, Hulk Hogan, Sting, and Shawn Michaels solidified their Hall of Fame statuses. Additionally, the late 1990s were indisputably the period in which pro wrestling achieved its highest level of mainstream fame: before this period, the sport had been largely viewed as a lowbrow entertainment with minimal mainstream appeal. The period of the “Monday Night Wars” did nothing if not demonstrate just how popular pro wrestling had the potential to be, and I suspect many readers would enjoy and appreciate Reynolds’ text for the nostalgic value alone.

On the downside, while it’s convenient to focus on subjects that readers probably would be familiar with, there’s more to the history of pro wrestling than just the period from the early 1990s until 2001. Even if Wrestlecrap provides a different perspective on this period of wrestling history, there’s no escaping the fact that I, being a seasoned and longtime wrestling fan who came of age as it were in the late ’90s, didn’t learn much of anything from this book. Maybe my main problem with the choice of subject matter to focus on is that less than a year after Reynolds released this first Wrestlecrap book, he would release another – this one devoted exclusively to the “death” of WCW. As such, there’s a ton of crossover between the two books, a fact which (when combined with Wrestlecrap’s very minimal coverage of non-WWF and non-WCW promotions) only further accentuates the notion that the book doesn’t honestly provide the all-encompassing examination of the stupidity and excess of pro wrestling that its title hints at. 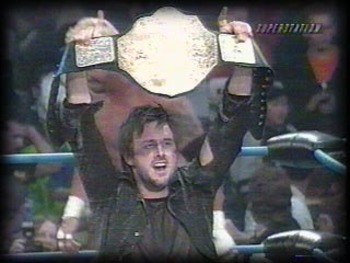 No caption needed. If you have to ask, you’ll never know.

Potentially problematic as it may be though, there are still many reasons why a fan of “sports entertainment” would want to give this book a looksee. As mentioned, it offers up a ton of nostalgia, much of which is of the “I completely forgot about that…but it’s completely hilarious” variety. It’s very clear that Reynolds has the same love and appreciation of pro wrestling that many of his readers would possess, and his book is perfectly written in a manner to appeal to that crowd. Though easy to read to the point where I might even say that it appeals more to dim-witted readers, the tone and writing style seen here is precisely what the material calls for: I’d hardly expect a book dealing with this subject to be a scholarly piece full of ten dollar words. That being said, there are a handful of noticeable grammatical and spelling errors present in the final text, and some of the language used in this book might turn off some readers. Inexcusable though the errors are, I have to emphasize that the crowd who would read a book dealing with pro wrestling in all likelihood not only wouldn’t notice subtle errors, but also wouldn’t be turned off by the occasional instance of colorful word choice and raunchiness.

The Undertaker versus … a hairy, nude man?

The book’s main selling point is obviously the humor inherent in the subject, and Reynolds emphasizes the comic value of the material at every opportunity. Generally speaking, the tone text seems to “laugh with” not “at” the wrestlers/performers involved in the situations – after all, pro wrestling is nothing if not completely absurd through and through. On occasion however, the author does seem to head down a path that’s somewhat tasteless and the whole of the book could probably be labeled as being “sophomoric.” Again, I think this is more or less par for the course in a book of this nature; in any case, I wound up chuckling to myself quite regularly while reading.

Accompanying the text are a handful of photographs, including a section of full-color prints. Though I might have liked additional images just to see who and what the author was referring to at various points throughout the book, I think there was a nice assortment and amount of pictures here. It’s certainly fortunate that, with the aid of , a reader can virtually “re-live” any of the goofy gimmicks and storylines discussed herein. Overall, Wrestlecrap: The Very Worst of Pro Wrestling is an enjoyable read from cover to cover even if it’s something I’d be more inclined to apply a somewhat mediocre rating to. 268 pages in length and featuring a font size that looks large to my eyes, it’s probably not the best or most comprehensive pro wrestling book out there: it’s one that ultimately is content to poke fun at the goofiness of the sport rather than tell the reader anything he didn’t previously know. Still, while it probably wouldn’t be something that the average reader would have an interest in, the book (which includes a forward written by the late , best known for wrestling under the name “Earthquake”) comes highly recommended to the fan of sports entertainment.

The more things change, the more they stay the same…