THE AMAZING SPIDER-MAN – VOL. 4 (MARVEL MASTERWORKS) – FROM TRAPPED TO UNMASKED.

Cons: Some filler stories here and there

Spider-man attempts to thwart a theft operation by an unknown outfit, whom he then learns that their leader is an unknown entity calling themselves The Master Planner. At the same time, Peter must deal with his first day of college, and then suddenly tragedy strikes his home. -summary 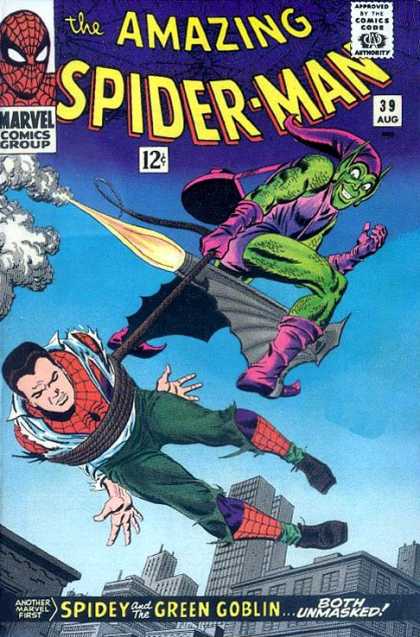 The Amazing Spider-Man Volume 4 may not be the best volume at this point in regards to overall quality storytelling. However, it’s definitely the single most influential volume because the outcome towards the end of the book will play a critical catalyst in the life of Peter Parker/Spider-Man for the rest of his life. This one major event is very important in the Spider-Man mythos.

It was no secret that Spider-Man was one of Stan Lee’s favorite children, easily 1 or 2 as he seemed to be a lot more into these stories. Spider-Man decides to search for The Master Planner when he steals something very important to him. At this point, this is definitely Spider-Man like never before as he becomes very aggressive when dealing with the criminal element. His angry drive and determination is such a shock that he sends his deadliest enemy running off practically fearing for his life. Things also take another turn when the Green Goblin returns to settle the score and things end up going in his favor. The major running storylines taking place such as “The Master Planner” story arc is definitely Spider-Man at his best; this storyline is what puts the “super” in hero, as he does everything in his power to protect and save family. He is very selfless and full of courage, and this is just some of the things that make him so great. The final major arc Spider-Man vs. The Green Goblin, results in one of Marvel’s most famous battles, and it was no doubt Spider-Man’s most important battle by this point.

There are some other good stories taking place with Spider-man engaging in another forgotten, but very fun slugfest with the Molten Man. I will never understand why these confrontations would never make it to most people’s “greatest battles” list, because like the Scorpion, Spider-Man is usually forced to take it to the Molten Man, and I can’t think of a single boring brawl between them.

While Spider-Man’s life is no doubt interesting; Stan Lee continues to make Peter’s life equal or close to it. This batch of stories features the first appearances of Harry Osborn and Gwen Stacy, and I love the rocky start here because it all plays into the now legendary “Parker Luck”. The minor flaws come in two forms; filler stories that really aren’t as good as everything else, but they serve their role as nice cool down stories though. The second is that Lee straight up rehashes how he handles his main characters love interests. There is way too familiar of a feel across Spider-Man, Iron Man,  and Thor books. It’s quite clear that Lee had very little imagination handling these, with Captain America being handled the best in this department when looking back. John Romita follows up Steve Ditko’s artwork very well with how he handles the action. The way Spider-man maneuvers in battle is something I never get tired of seeing; but the highlights are definitely the brawls with Molten Man, along with the fights against Dr. Octopus and Green Goblin. His character designs, especially for the females, are really good, and he gets Gwen Stacy down as the girl any man would want to be with. I especially like the fusion with Lee’s storytelling as his pencils captures most of the drama perfectly, and the closing of The Master Planner storyline is the best example.

This volume doesn’t end in a cliffhanger to leave one salivating for the next volume, but with the good stuff found here it really didn’t need it. I definitely recommend this volume as a must buy to anyone whom has either been following these stories or reading them for the first time.