“…YOU DON’T HAVE TO BELIEVE IN CRYPTID: THE SWAMP BEAST FOR IT TO GET YOU…”

See it at or on the

Pros: Enjoyable as a horror miniseries

Cons: This just in: it ain’t real

“Throughout the United States, there are legends of strange and unidentified creatures stretching back hundreds of years. This program is a legend brought to life. It is told through dramatization, eyewitness accounts, and expert interviews.”

…so begins History Channel’s Cryptid: The Swamp Beast, a six-episode series run in the spring of 2014 that’s somewhat different from any of the other monster-related programming that’s been clogging up cable television for the past few years. Instead of following a “crack team” of investigators as they inevitably are hunted down by a mysterious (and imaginary) off-camera creature, Cryptid plays sort of like a version of True Detective or even True Blood in which the main villain of the piece is a mythical being known as the . Sometimes associated with the legend of the Bigfoot-like “,” the legend of the Rougarou originated in the Cajun bayou, with the creature usually being identified as a blood-thirsty, shape-shifting creature similar to a werewolf that can assume either human or animal form. 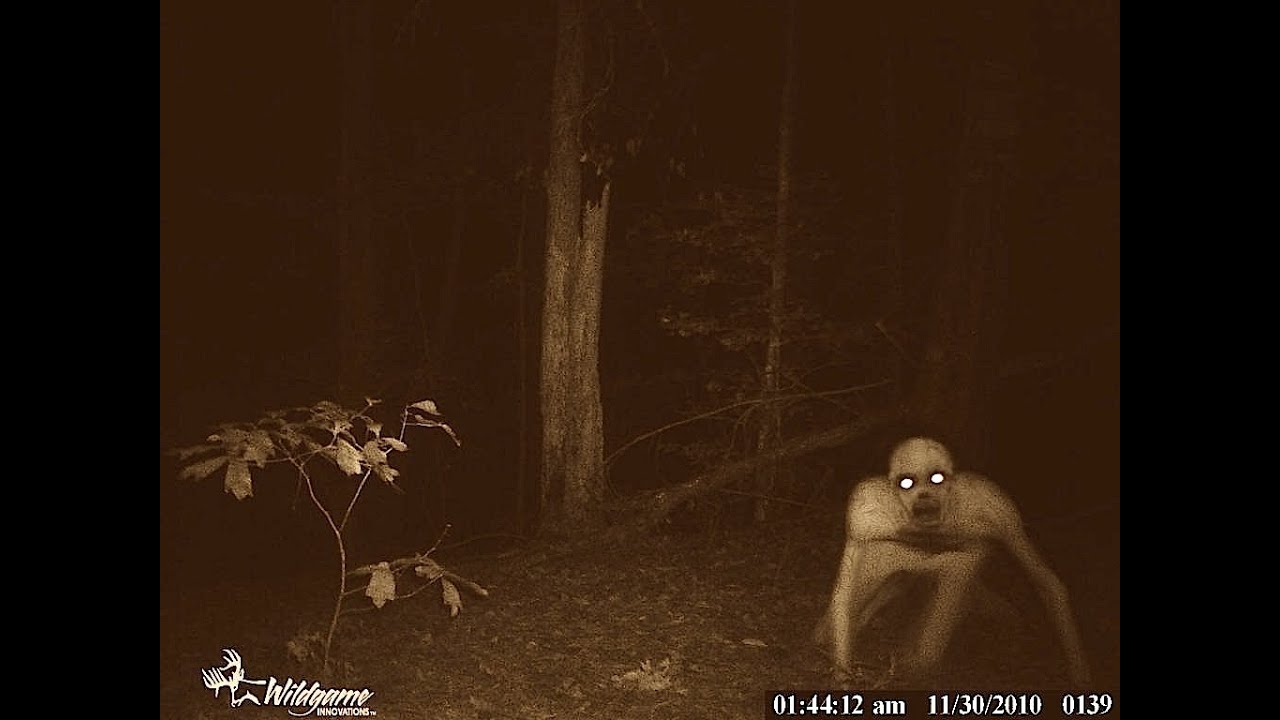 Working from the basic folktale surrounding the Rougarou, the writing team of Cryptid (James Asmus and Collin Armstrong) weave a tale of several interconnected characters on the hunt for an unknown creature or person responsible for a series of deaths in southern Louisiana. The first episode of the program introduces these characters, namely an animal control specialist named Luc Baptiste, his two assistants Jules and Tammany D’Entremont (who are cousins), and a local sheriff’s deputy named Patrice “Trio” Lambert. After the discovery of a mutilated cow, Baptiste and his crew are sent in to investigate, eventually placing trail cameras and traps in an effort to either identify or hopefully capture the animal responsible. Things get more bizarre after a tourist’s phone is recovered deep in the swamp. When video footage is pulled from the phone, it seems to capture the moment when its unfortunate owner was attacked and presumably killed by an unknown entity. As the show progresses, more and more suspicion in relation to the killings is placed on the Jagneaux family (often hilariously presented as the virtual incarnation of evil and “a damn nasty bunch”), a local clan of stereotypical, shotgun-toting bayou folks who may or may not know more about the situation than they are letting on, and the hunt for the rampaging beast becomes more and more intense as it becomes apparent that not only the animal control team, but also the local citizenry are in ever-increasing danger. 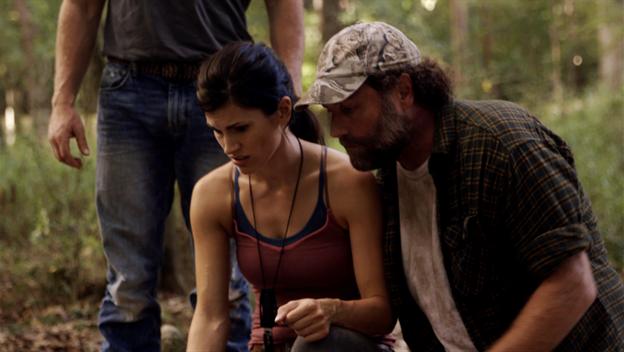 …so what exactly are we looking at here…

Admittedly, when I first caught the debut episode of this show back in February of 2014, I was somewhat less than impressed. Marketed and presented in a way that made it seem like a representation of actual events, it quickly became clear that Cryptid was nothing but a (possibly too) slickly-produced fabrication that owes more than a bit to The Blair Witch Project and any number of other so-called “found footage” horror films. That said, the fact that there’s a thread on the imdb.com message boards in which a user excitedly explains that he has “proof” the show is phony is indicative of the fact that many viewers are all to willing to buy anything they see on TV. I’d offer that the viewer who at all believed this program was a representation of real events after about a half hour of the first episode really needs to start evaluating his level of gullibility.

Blurry Photos? Must be a monster!

In all honesty, the program does a decent enough job of creating the illusion of authenticity. The main body of the show is presented from a first-person’s point of view, presumably photographed by a film crew who just happens to be tagging along with the animal control or police personnel whenever something important happens. As is the case with many programs of this nature (Finding Bigfoot being perhaps the most obvious example), the various characters often speak directly to the camera in an effort to explain or narrate their own story. In between the notable story developments, brief montages are inserted in which sensational newspaper headlines flash on screen while “locals” tell various folktales about strange occurrences in the swamp. More amusing than anything else due to their outlandish nature, these segments do add to the flavor of the program since they frequently feature images of how life works in the bayou. Though this show appears to have been produced with the cooperation of the state of Louisiana, it doesn’t do much to show the best side of the state. As seen here, the Louisiana bayou looks like an absolute dump, full of nearly impenetrable wetlands and lots and lots of rubbish and trash. Director Ty Clancey also presents occasional asides in which various scientists and experts explain various aspects of the story. These segments are obviously included to add some semblance of “credibility” to an otherwise ridiculous program.

Ultimately, one’s appreciation of this program will come down to whether he’s willing to view it as entertainment: as a fictional television miniseries with horror movie overtones, Cryptid actually isn’t too bad. The main actors in the program do a fairly credible job: Britt George as main character Luc has a commanding presence throughout the show, while the marble-mouthed Jimmy Lee Jr. is believable as his spooked Cajun assistant Jules. Meanwhile, Rachel G. Whittle tags along as Tammany, the obligatory plucky female, and James Ricker II plays the increasingly worried local deputy. As tolerable as these performances are however, the supporting cast is laughable. Many of the show’s more outlandish claims are literally hammered home through sheer repetition from an apparent authentic local “folklorist” named Jami “Captain One-Eye” Burns who indeed has only one good eye. Apparently, this disability is supposed to make him more credible as an “expert” in bayou myth and legend – and it’s also supposed to make his doom-laden monologues more ominous, thus adding additional intensity to the show’s script.

The main cast (here, we have Jimmy Lee, Jr. facing us on the left and Britt George on the right) isn’t bad – it’s the supporting players who are iffy.

The miniseries format makes this program more compelling than the typical episode of Alaska/Swamp/Mountain Monsters in which the (undeniably goofy) set up takes all of three minutes. The use of some rather wild, way-out-there locations certainly helps sell the situation in Cryptid, especially when combined with the “expert” testimony reinforcement, and several segments in the show are genuinely creepy (scenes in a grimy abandoned sugar mill and the surrounding cane field are highlights). The show’s first-person format additionally allows some of the more questionable special effects to be masked by shaky camerawork, and the use of eerie sound design and jarring musical accents only adds to the suspense, particularly in later episodes. Even if the program is pretty innocuous when compared to the mean-spirited modern horror films, there are some isolated moments of gore and nastiness here and the frequently disorienting atmosphere is a plus.

What is lurking out there?

On the downside, nothing can entirely make up for the level of goofiness that exists throughout the series. Numerous segments of this show simply push the envelope of absurdity too far – when a nerdy “cryptozoologist” named Quinton Schuster (who’s main purpose seems to be to exclaim that he “has tons of equipment”) shows up for no good reason other than to provide a throwaway character for the titular creature to aggressively pursue or when Tammany visits the most unrealistic scientific lab in the world, many viewers will be cracking up rather than gasping in terror. It’s also increasingly hard to look past the fact that this program is quite literally a collection of scenes pulled from other, better movies and programs: viewers will likely recognize various elements transposed from The Blair Witch Project (stick figures hanging from trees), Jaws (the scene where Hooper pulls the tooth from the Ben Gardner’s boat), and any number of films dealing with violent/bizarre backwater folk among others. Ultimately, though the script is pretty solid and certainly watchable from start to finish, it seems very convenient and obvious, lacking much originality or genuine punch. This is particularly true of the series’ ambiguous ending, which is just plain dumb.

All in all, Cryptid is a mixed bag, but one that I think is at least somewhat worthwhile. In my opinion, its main problem was that it was a fictional miniseries marketed as a real deal documentary and played on a channel that is associated with educational programming. People simply weren’t expecting and didn’t quite know how to take something like this, and I think once they figured out they’d been had by a phony show, some viewers were (perhaps rightfully) turned off. Conversely, as the entertainment piece it quite obviously is, Cryptid: The Swamp Beast satisfies, even if it doesn’t so much as attempt to reinvent the wheel. Hell, I’ve got to give the show credit for admitting to including dramatization at the beginning of each and every episode. That’s something none of the other modern monster shows will do, and although Cryptid is far from being perfect or even very good, I’d give it a moderate recommendation as an agreeable time-waster.