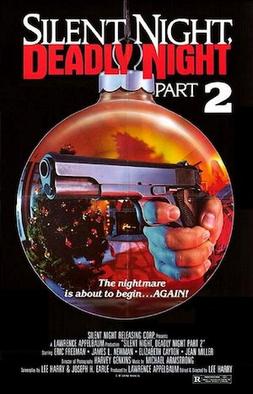 Pros: I laughed quite a bit; Eric Freeman’s acting ability is really something

Cons: So many…oh so many…

In the annals of truly pathetic horror movies, a few titles rise above the rest. Made in 1990, has become widely known as one of the “best, worst movies” ever made: an earnest attempt to make a decent flick that simply . What made the film so memorable was that its “humor” was completely organic: writer/director Claudio Fragasso wasn’t trying to be funny when he wrote the script, but the whole production is so utterly absurd that it becomes the stuff of comic genius. 1987’s Silent Night, Deadly Night Part 2 plays in a somewhat similar manner in that it positively cannot be taken seriously. Continuing more or less where the first film lets off, SN, DN 2 follows the story of Ricky, the younger brother of the killer from the first film. Like his brother Billy, Ricky is troubled by the fact that a man dressed up as Santa Claus killed his parents while he was still a baby, and he’s forced to live in a strict orphanage run by a borderline sadistic nun. In his teenage years, Ricky starts to have the sort of mental breakdown that led his brother down a path to murder, and by the time he’s in his early twenties, he’s a unstable live wire that’s ready to snap. While none of this material seems at all inspired, this is the type of story that low budget horror movies are made of: an excuse to have a murder spree occur at some point during the film. Unfortunately, Silent Night, Deadly Night 2 was afforded almost none of the production resources of the genuinely decent first series entry, resulting in a finished product that’s immensely unimaginative, largely incoherent, and utterly hopeless from a technical standpoint.

Didn’t get enough Silent Night, Deadly Night the first time around? You’re in luck, since the “best” moments from the first film are screened again here.

If the story is correct, director Lee Harry was given instructions by the film’s producer to re-edit footage seen in the first Silent Night, Deadly Night and pass off the results as a standalone sequel. Harry demanded that new footage be shot and rightly so: who would want to watch a second movie made from the same, already-seen material and what could be done to make said recycled footage seem remotely fresh? Even when production money was allotted to the project however, there wasn’t enough to create an entirely new film, thus Harry in collaboration with Joseph H. Earle came up with a screenplay that operates mostly as a flashback, told from Ricky’s perspective as he sits in a mental hospital, spilling his guts to a court-ordered psychiatrist. The opening half of SN, DN 2 then consists almost entirely of footage recycled from first film with occasional voiceover narration provided by the profanity-spewing Ricky. Literally, this series of flashbacks ripped directly from the original film lasts more than half an hour, by which point anyone who’s seen the first film would not only be bored to tears, but plain insulted by the fact that this hunkajunk sequel be passed off as a new and different film. Once Silent Night, Deadly Night 2 starts engaging in its own story, i.e. the one relating specifically to Ricky and his own descent into madness, the film improves to some extent – but maybe not in the way that was originally intended.

To put it simply, the original footage seen in Silent Night, Deadly Night 2 (roughly comprising the final 45 minutes or so of the movie) is atrocious, largely due to the mind-boggling lack of acting chops possessed by the hulking Eric Freeman who plays Ricky. Freeman seems to have attended the Arnold Schwarzenegger school of acting, overemphasizing nearly everything he says thus making the entirety of the script feel like an extended one-liner while delivering lines in a choppy and hilariously punctuated manner (his declaration of “young and stupid…that’s my problem” says all too much about the nature of this film). If that’s not bad enough, his performance is so forced and overdone that the film winds up seeming almost like an overly violent live-action cartoon. Watch as Freeman, the perpetual bad attitude Sally that he is, spits vitriol at everyone in sight, insulting the psychiatrist who may be able to spring him from the mental hospital he’s confined in (“I could squash you like a bug”), and contorts his face into some of the most ridiculous expressions possible at inopportune moments. Coming across as a complete wisenheimer, Freeman’s crowning moment occurs when he goes on a murder rampage culminating in the shooting of a man positioning his trash cans by the curb. “” Freeman exclaims with a little too much gusto. It’s unbelievable that someone who sought employment in film would overact to the extent that Freeman does in this film: his soul-crushingly tasteless performance has to be one of the worst I’ve ever seen in a theatrically-released film, yet it’s perhaps the one element that makes Silent Night, Deadly Night 2 watchable on some level. Simply put, this performance has to be seen to be believed.

Sadly, there’s not much else here that warrants a viewer’s attention: even beyond the fact that it includes so much recycled footage, Silent Night, Deadly Night 2 is horrendous, more a series of vignettes than a coherent motion picture. Precisely no imagination has been applied to this material: gee, do you think Ricky will eventually break out of the mental hospital and try to seek revenge on the nun who abused him and his brother as children? And then there’s the big murder spree itself, which consists of some of the least thrilling kill scenes ever included in a slasher film: we have several shootings (yawn), an umbrella through a torso, and jumper cables inserted into a man’s mouth. The special effects seen are lousy, and there’s almost no gore quotient to the film whatsoever. Elizabeth Cayton (as Ricky’s ill-fated girlfriend), Ken Weichert (as the girlfriend’s sleazeball ex), and an especially listless James Newman (as the shrink) sleepwalk through their parts, making one wish the whole film was instead a performance art piece or stand-up act from the ultra-hammy and corny Freeman. At least that would have been something to see.

The insanity of Eric Freeman really is the film’s only selling point.

Instead we have to pretend to be satiated by an and a completely different actress sporting bubbly scars on her face pretending to be the same Mother Superior as seen in the first film. One wonders just what the hell was going through the mind of director Lee Harry when the production of this film was taking place. It’s astounding to think that he would have be tolerant of the completely off-the-wall performance being turned in by his lead actor, yet maybe by that point Harry (who surprisingly, still finds work in the industry working as an editor) was just trying to get the film in the can, whatever the cost. All things considered, that may have been the best call.

Despite a few graphic moments, SNDN2 seems incredibly lame as a horror movie.

In any case, the entirety of Silent Night, Deadly Night Part 2 seems to have been a production nightmare for everyone involved, and it’s absolutely amazing that the film was not only completed, but that it’s still remembered – even if for the wrong reasons. Though this would undoubtedly amuse viewers who enjoy really, really, I’m talking seriously bad movies, it’s honestly very nearly so pathetic as to warrant me to unanimously dismiss it as complete trash. Still, there’s something fascinating about watching a cinematic trainwreck of this caliber: director Harry’s film has to be placed on a pedestal with such jaw-dropping abominations as and . I can’t in good conscience recommend this flick to anyone, but I’ll say that on some level I did enjoy it. Taken as a comedy, this is pure gold – but the very select crowd who could/would appreciate something like this would likely know who they are. All others, beware: my two star rating could very easily be a negative three.

I’d say the best way to see this film would be the which also contains the surprisingly decent first series entry (widescreen; no extras). The film can also be at amazon.

5/10 : Recycles all the good kills straight out of the first film, the new footage only offers up a plate of leftovers. As a horror film, this is undeniably lousy with below-average effects.

8/10 : Ricky lets loose with a barrage of profanity at every available opportunity.

4/10 : OK, so the film does include nudity pulled straight out of the first film, but director Harry cops out right when he could deliver some top-notch nudity of his own. As with most other aspects of the movie, it’s disappointing in this regard.

9/10 : Almost a must for fans of truly awful cinema; this has to be one of the worst horror flicks of the ’80s.

“You tend to get paranoid when everyone around you gets dead.”