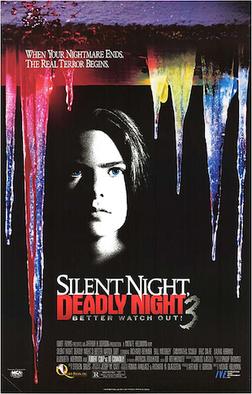 The second sequel to the highly controversial and surprisingly decent ‘80s slasher dealing with a killer Santa Claus, 1989’s Silent Night, Deadly Night 3: Better Watch Out! was directed by Monte Hellman (known for such films as , , and ) who regards it as his best work. Note the wording there: Hellman didn’t say his “best film” and rightfully so, since SNDN3 pales in comparison to even the worst of the aforementioned trio. Consider that the original script was rewritten in a week’s time and that director Hellman had the finished film in the can a month later and you can begin to see his point: it’s frankly a miracle that SNDN3 was completed in the first place. The downside to all this is that the film plays like it was thrown together very quickly, having a terrible sense of pacing, a script that’s so unfocused it borders on being incoherent, and amateurish acting that very nearly makes the film seem more like a parody than a straight-faced effort. From a purely technical standpoint, SNDN3 is an improvement over the extremely sloppy second series film, but it’s nowhere near as much fun.

Only one scene in the film involves a killer Santa, meaning that the main gimmick of the SNDN series is all but absent.

Remaining somewhat consistent with the original story of brothers Billy and Ricky Caldwell who, having witnessed the murder of their parents by a man dressed up as Santa Claus as children, grow up to carry on murder sprees of their own, SNDN3 begins by introducing us to a blind psychic named Laura who’s been recruited by a somewhat sketchy scientist named Dr. Newbury to “tap into” the brain of now-comatosed Ricky (who survived the second film when his brain was “surgically reconstructed”). This attempt by Laura to communicate with the unresponsive serial killer establishes a link between the brains of these two characters, and after (surprise!) Ricky miraculously snaps out of his coma on Christmas Eve, it’s of course Laura who he sets off to track down and kill. The young woman, meanwhile, has headed to her grandma’s house for a family get-together with her brother Chris and his slutty girlfriend Jerri, but the newly-awakened Ricky soon crashes the party. Can Laura learn to appreciate her psychic “gift” before she’s the latest victim of the merciless killer?

Bill Moseley, best known as one of Rob Zombie’s regular actors, plays the zombie-like Ricky, but can’t do much to add pop to the tiresome story.

Carlos Laszlo’s script for this made-for-video piece is, frankly, a disaster. Nevermind the familiarity and predictability of the material or the fact that the story resorts to the old “psychic girl versus unbeatable murderer” gimmick that had been the basis for the previous year’s Friday the 13th VII: The New Blood: the real problem with Laszlo’s script is that it’s full of pointless dialogue scenes added to pad this baby out to a feature run time of around ninety minutes. While the reanimated Ricky Caldwell (his brain exposed through a clear plastic container sitting atop his head) stalks Laura, her brother and his girlfriend, the film’s narrative routinely switches up to focus on a concurrent storyline involving Dr Newbury and a gruff police detective trying to track the killer down. Having seen more than enough Japanese monster flicks in which subplots routinely intrude on the monster action, I can deal with this almost obligatory secondary story – but when we start to get lengthy dialogues between these two characters in which they discuss the then-brand new technology of cell phones or reveal their contrasting philosophies about scientific ethics, the film becomes not only frustrating but downright hopeless. What purpose do these dialogues serve other than to kill time? In a film that’s already light in terms of its horror elements, it seems an incredibly foolish and plain asinine thing to do to slow the pace down even further.

This severed head sitting on a desk is about as good as the special effects get in this movie, which is to say they’re kinda shoddy.

In ways, this third series entry has the most in common with the vast majority of other classic slashers since the killer is portrayed as a Michael Myers-like “boogeyman,” but as mentioned, the film has extremely limited amounts of the typical horror movie trappings. Most of the killings in this film occur offscreen, and the few that are included in the picture are not only poorly-handled, but plain tedious. We have the usual stabbings and shootings as well as a severed head positioned perfectly on a desk, but the only truly notable moment occurring when a sharp stake punctures a human torso. Gore effects are also few and far between and often quite lousy – I almost held my head in shame when, as a woman has her throat slit off-camera, what appears to be watered-down strawberry syrup is flung across a desk to simulate the blood splatter. What’s worse than the lack of violence and gore is the inexcusable lack of any tension or suspense in the film. Hellman seems utterly incapable of creating any honest interest in the plight of the characters: it’s a given that these people’s lives are in danger…but you wouldn’t know it. The stalking scenes are plain pathetic, clumsily edited and often accompanied by silence on the soundtrack. Mind you, Steven Soles’ very 1980s-sounding music seems wildly inappropriate in the first place, but I would have hoped that Hellman would use some piercing music cues or sound effects to punctuate these scenes (after all, these moments are theoretically the ones in which viewer excitement should be at its maximum).

OK, so Samantha Scully is cute, but her portrayal of the somewhat bitchy, Gothed-out blind girl Laura is none too spectacular.

Given the performances by the likes of Samantha Scully (as the noticeably unlikable Laura), Eric DaRe (her brother), Laura Harring (the brother’s girlfriend, who alternates between having a Spanish accent and not having one), Richard Beymer (Dr. Newbury), and Robert Culp (the detective), one could almost be led to believe that Silent Night, Deadly Night 3 is supposed to be a parody of the slasher genre. Unfortunately, even if this crew of actors (and particularly Beymer and Culp) puts forth some almost laughable line deliveries, the tone of the movie appears to be serious, which is another ill-advised decision from the writer and/or director. Part two of the Silent Night, Deadly Night series was completely pathetic from a filmmaking standpoint, yet is undeniably watchable since lead actor Eric Freeman goes so overboard with his performance: I couldn’t keep my eyes off the screen even if my jaw was hitting the floor at how downright dumb the whole thing was. Hellman, on the other hand, seems to purposely avoid anything that could possibly add to one’s enjoyment of the picture – it’s utterly joyless and ultimately pointless viewing. Even the appearance of horror movie icon Bill Moseley as the almost zombie-like Ricky is forgettable.

I suppose I could blame part of the problem with this film on the fact that it was thrown together in a matter of days, but director Hellman quite honestly seems to have precisely no penchant for handling this type of material – at least not in 1989 (one of Hellman’s first movies – a corny but very watchable horror film called The Terror – is seen playing on televisions throughout SNDN3). Sure, he gets the thing done, but it’s difficult to imagine any director turning in a film worse than the finished version of Silent Night, Deadly Night 3. Lacking even the basic ingredients that would make it successful as a genre film, this unfocused, unexciting, undeniably lame film drags on and on for ninety minutes and provides the viewer a scant payoff in the end. I honestly can’t come up with a single reason why anyone in their right mind would want to sit through this mess: though I liked some of the more hallucinatory and dream-like bits of the film – most of which take place in the first half hour or so, it’s downright sad to see a director like Hellman reduced to making this kind of trash to pay the bills. This film is best avoided.

Though the film is also available in a hit-or-miss four-movie pack with the likes of My Best Friend Is A Vampire, Repossessed, and Slaughter High, the three-movie set which includes parts 3,4,and 5 of the Silent Night, Deadly Night series may be the better bet (implying there is such a thing as a good bet when referring to these titles). Either package is full screen, with no extras.

3/10 : An absolute minimum of gore since most killings occur offscreen; what is here is pretty tedious.

3/10 : One scene of topless nudity presented in a non-sexual context and some fleeting innuendo.

2/10 : Mostly a curio piece considering it was directed by a well-regarded filmmaker, but this is pretty pathetic overall.

“Well, studying snakes is your thing, Doc. Stompin’ on ’em is mine. And speaking of snakes, pardon me while I relieve the reptile.”