Cons: The misleading ad campaign apparently pissed some people on the internet off.  SURPRISE!  It’s worth keeping in mind that this is a documentary, not a carnival sideshow.

Proving that alongside all the reality TV bunk and staged and/or speculative programming, Discovery Channel still can make outstanding legitimate documentaries, 2014’s Eaten Alive special has to be one of the more jaw-dropping things the channel has aired. This two-hour program followed snake expert/conservationist/explorer Paul Rosalie into the deepest, darkest corner of the Peruvian Amazon in search of a huge green anaconda known locally as the “Chu’ mana.” Though Rosalie’s main goal was to prove that such a creature could and in fact does exist in this untouched habitat, as the title of the program suggests, there was an ulterior motive to the snake hunt. Having constructed a suit specially designed to withstand the constricting coils of a thirty-foot snake, Rosalie intended to capture one of these beasts and offer himself up as prey to demonstrate the truly awesome abilities of this apex predator. The first ninety minutes of so of Eaten Alive however plays more like a jungle adventure than a sensational program about a dude getting eaten by a huge serpent. Rosalie, his wife, and a team of researchers, trail guides, and animal trackers head well off the beaten path in search of the virtually unexplored region of the Amazon known as the “Floating Forest,” made up of small, spongy islands floating on a pitch black bog some thirty feet deep. The fact that palm trees growing here barely peek above the water level gives some indication of the make-up of his swampy area, and it’s full of hazards both in terms of its unstable terrain and the various animals that live here. Aside from being prime breeding ground for anacondas, the swamp is teeming with poisonous spiders, snakes, and caiman, seeming to be about the last place any expedition would really want to camp out. Regardless, Rosalie and his team set about exploring the area in search of signs that large snakes are on the prowl – and wind up tracking down several of the creatures. 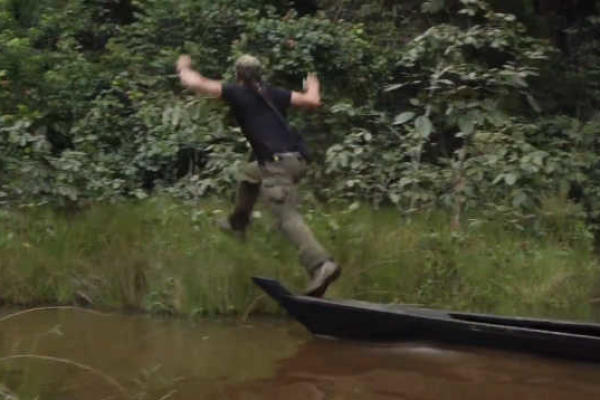 Jumping into this mud bog in an attempt to wrestle a thirty-foot anaconda? Not sure that’s such a good idea…

Edited in such a way to both accentuate the dangers of the Amazon and heighten the tension as the team tries to stay alive within it, the indisputable highlights of the first half of the show deal with various, hairy encounters with Amazonian wildlife. At one point, while traversing through a chest-deep creek, the team stumbles on an electric eel ready to throw a charge that could measure six hundred volts their way. This situation hammers home the notion that even when there’s not a large predator of the reptilian variety around, traipsing through the Amazon is incredibly dangerous. The situation only gets worse once the team reaches the “Floating Forest.” Here, they first square off against a twelve foot snake, then one measuring just under twenty feet in length, before finally wrestling with one that could top out at thirty feet long. Even with the smallest of these animals, it’s readily apparent how powerful anaconda really are, and when Rosalie dives headfirst into the pitch black waters of the swamp in pursuit of an animal that’s the size of a bus and could literally swallow him whole, I was forced to come to the conclusion that the man may be entirely certifiable.

Now that is a big ass snake!

The portion of Eaten Alive in which the team attempts to corral a large snake is filmed and edited exceedingly well, often filmed from the first-person perspective, literally putting the viewer in the middle of the action. There are many absolutely astonishing, breath-taking views of essentially unexplored parts of the Amazon; these places aren’t areas that most people would ever want to visit due to the extreme risk involved in exploring them, but they are without doubt stunningly beautiful to look at. There’s even a few moments here that could be genuinely unsettling: in one instance, the camera pans around the bog at night to reveal dozens of glowing caiman eyes glaring at the team members. Along with the solid filmmaking involved, I also really appreciated the fact that various herpetologists (i.e. reptile experts) intermittently provide explanations and insight into the anatomy and behavior of the anacondas the team is searching for. There are some really nifty computer animations demonstrating how anacondas first kill and then devour and digest their prey, and though it’s not the most pleasant thing to hear about, the entire process is fascinating and pretty darn amazing. Along the way, we also get some brief background into legends and myths about giant serpents and, in case the documentary isn’t outrageous or fast-paced enough for viewers raised on a steady string of consistently bonkers reality TV, one segment deals with constrictor attacks on humans. A rather startling actual photograph of a large python devouring a Malaysian man is about the most eye-opening thing in the documentary…at least until the final twenty minutes or so.

I don’t think I’m especially giving anything away by revealing that Rosalie and the expedition team don’t actually succeed in capturing the thirty-foot monster anaconda during the course of this program (honestly, I don’t know how they ever expected to do this in the first place), but that failure doesn’t mean that the genuinely insane stunt/experiment at this program’s center doesn’t take place. Though Rosalie has to settle for an especially aggressive twenty foot anaconda instead of the thirty-footer he’d hoped to find, he nevertheless does don the elaborate snake-proof suit and allows the reptile to attempt to devour him. And this is where Eaten Alive attempts a level of jaw-dropping spectacle that few programs on television these days come close to despite their best, most desperate attempts. 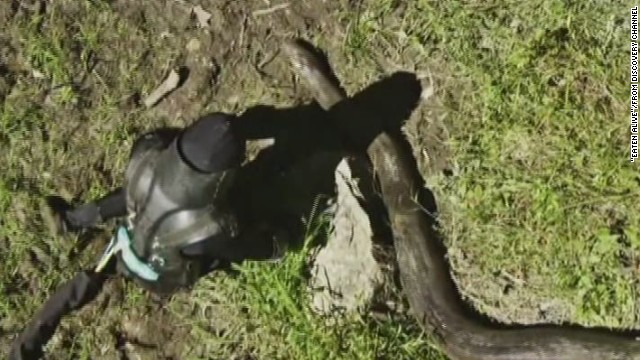 Rosalie, on the left wearing the snake-proof suit, attempting to goad a twenty-foot specimen into attacking him

It’s pretty remarkable to see how even this comparatively smaller animal is able to pin down a fit adult human male, going so far as to start to wrap its expanding jaws around the oversized helmet that Rosalie is wearing. The fact that I would think that the creature at some point must have realized that this thing in its mouth wasn’t especially edible makes the footage included in this documentary all the more shocking: views directly into the gullet of an anaconda could potentially be quite creepy. It’s not difficult to imagine a snake being able to fully devour a human after watching this program: in the same way that Discovery Channel’s Shark Week seems a bit suspect in its supposed goal of advocating for shark conservation even though it focuses heavily on stories of shark attacks, I’m not sure that Eaten Alive is the best way to get the word out about saving the Amazonian snake habitat. Still, I guess any program that gets easily distracted American viewers at all interested in nature is better than nothing, right?

Rosalie in the clutches of the snake.

OK OK, so a dude isn’t actually devoured then regurgitated by a huge snake during the course of this show, but honestly, did anyone actually expect that that would happen?   If so, the ad campaign worked flawlessly.  Even though it doesn’t completely follow through on its main selling point, Eaten Alive was positively compelling viewing that only seemed to get more unbelievable as time went on. The jungle adventure portion of the program is quite interesting in and of itself, providing plenty of moments to disturb those afraid of creepy crawlies or large reptiles, but when the program switches gears and focuses its attention on the promise of showing a man being attacked and very nearly eaten by a large anaconda, it reaches another level of fascinating spectacle. It’s a program like this that reminded me how rewarding legitimate documentaries can be, and I have to wonder why Discovery has become more reliant on obviously fabricated programming in recent years. If they are perfectly capable of making a jaw-dropping, positively authentic show like this that’s both extremely entertaining and quite educational, what’s the point of programming like Russian Yeti, Megalodon, or Shark of Darkness that do little more than test the gullibility of viewers? In any case, I’m hoping Discovery makes more programs like this in the future: I have a much easier time getting behind something real than the load of malarkey that the channel sometimes passes off as fact. Eaten Alive comes highly recommended.