A SOMEHOW LEVEL-HEADED SEARCH FOR THE LOST GIANTS

SEARCH FOR THE LOST GIANTS on History Channel

Cons: Quite similar in its set-up to Curse of Oak Island; can we really believe everything here?

It’s been somewhat disheartening in recent months to see television producers begin to produce clones of shows that aren’t that all that great in the first place. After the monster hunt show Finding Bigfoot became one of Animal Planet’s most widely-viewed and most talked-about programs, it wasn’t long before a gaggle of similar, increasingly phony time-wasters would pop up and stretch the genre of cryptozoological reality shows to the breaking point (can the genre ever pull itself back from the ludicrous extremes of Alaska Monsters?). I suppose I shouldn’t be all that surprised by this chain of events considering the entertainment business’ continual and ongoing habit of attempting to remake or redo various successes irregardless of whether doing so seems like a good idea, but when the History Channel recently decided to clone a program in Curse of Oak Island that deals with a fascinating subject but is undeniably dull and fairly pointless, I was initially very skeptical. Fortunately, the resulting program, Search for the Lost Giants which premiered in late 2014, is perhaps better and more intriguing than the show that inspired it and just may be the one that finally uncovers something truly astounding. 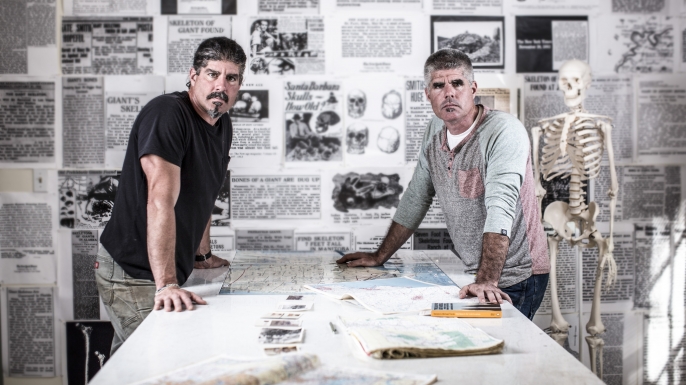 The expressions say everything you need to know: The Vieras take their giant hunting seriously.

Like The Curse of Oak Island, Lost Giants chronicles the efforts of a pair of brothers who, after successful business careers, decide to pour some of their fortunes into a rather outrageous pet project. Jim and Bill Viera made careers as New England stonemasons, but in their free time set about researching legends and folklore that dealt with giants – humanoids of extraordinary proportions often reputed to have double rows of teeth. After uncovering a seemingly endless trail of archival reports of these beings, the Vieras set about trying to track down actual remains – though there have been a number of giant skeletons supposedly recovered over the years, no one seems to know the whereabouts of any of them. This, as might be expected, seems to point to a conspiracy in which the scientific establishment has covered up truths that don’t quite fit in with their version of human evolution. 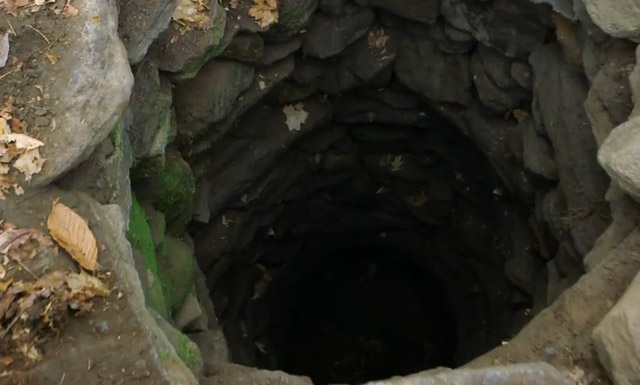 Entrance to the Goshen Mystery Tunnel. Could it hold the remains of a giant?

In any case, through its initial three episodes, Search for the Lost Giants has alternated a pair of ongoing storylines. The apparent main one in the show deals with a so-called “mystery tunnel” located in Goshen, Massachusetts. Appearing to have been constructed in the pre-colonial era, this underground tunnel measures some seventy feet long, has been constructed out of stone, and is reputed to contain a secret chamber – one which may or may not house the remains of a giant. The Vieras set about investigating the shaft and stumble upon a possible location for the undiscovered chamber. Their goal now is to convince a local archaeologist that a full-blown excavation of the site is not only warranted, but necessary. All the while this storyline progresses, the brothers also are seen traveling across the country investigating reports of giants and attempting to track down other possible remains. Thus far, some of these leads have proven fruitful: in the Missouri Ozarks, the brothers not only come across an archival photograph of purported remains, but also uncovered a large incisor that may or may not come from a human of huge proportions. 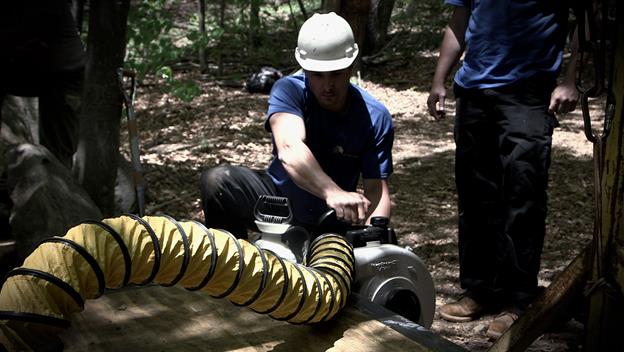 Pouring smoke into the tunnel in an attempt to prove the existence of a secret chamber.

Produced by Left/Right Productions, perhaps best known for producing episodes of PBS’ outstanding Frontline, Lost Giants is photographed and edited extremely well, having an approach that makes it seem a bit more credible than many similar programs. Set up as a pseudo-reality show that follows the Vieras on their quest to prove that giants actually existed, I maybe most appreciated the fact that this program cuts to the chase. It really does seem to focus its efforts almost exclusively on the actual search for giants, which is commendable considering that many of these programs seem more interested in making minor TV stars out of the people involved than in solving any sort of mystery. I think this show also does a fine job of providing a background by which a viewer at the very least can start to appreciate why the Vieras are going on a quest to examine something that seems ridiculous from a logical standpoint. An intermittent narration expounds on the ways in which giants have manifested themselves in popular culture (the stories of Paul Bunyan, Jack and the Beanstalk, David and Goliath, and the Cyclops are just a few well-known myths which feature these beings), and with the wealth of archival newspaper articles seen during the show, the idea that giants may have actually existed starts to seem more plausible.

The death of Goliath. Is it possible that historical accounts of giants are in fact accurate?

Personally, I think the Vieras are a more likable, approachable pair than the Lagina brothers, who feature at the center of the Oak Island show. One gets a sense that Jim and Bill Viera are nice guys who just happen to have a somewhat outlandish hobby, while I frequently get tired of hearing the more whiny Laginas complain about all the money they’re spending to get limited results while treasure hunting in Canada. Part of this may come down to the fact that the Vieras seem to be blue collar guys: a viewer is able to relate to them more than the almost arrogant, obviously white collar Laginas and while the Vieras realize that hard work will be the thing that makes their investigation a success, the Laginas seem convinced that they can solve the Oak Island mystery simply by spending more and more cash. Finally, although the premise of the show may seem outrageous, I actually think that the theories proposed in Lost Giants are more reasonable and maybe even credible than the load of malarkey that Oak Island often proposes as theoretical or actual fact: I’ve heard about enough speculation about how relics from King Solomon’s temple magically wound up buried in the muck off the coast of Nova Scotia. 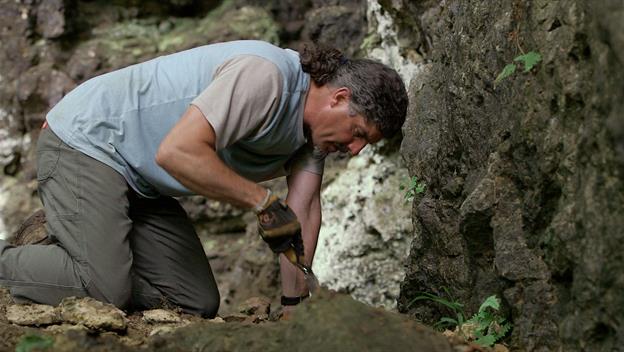 I’m glad to see the Vieras believe that hard work will be the way to solve this mystery, but will their dedication pay off in the end?

Ultimately, the thing about Lost Giants that separates it from the Oak Island program is its sense of pacing. While Oak Island bogs down in episodes in which nothing major seems to happen, the timeline of events in Lost Giants moves ahead steadily. It’s appears that the producers of this show learned a few things from the things that came before it – and well they should have. The result is a tighter, more compelling program that might not be slam-bang entertaining in the same way that fictional programs are, but is certainly enigmatic and intriguing. I’m rather looking forward to seeing what happens down the line on this show – episode three ended with an archaeologist agreeing that the Goshen Mystery Tunnel merited a more scientific investigation. Search for the Lost Giants might not be to everyone’s taste or be the best thing that’s ever appeared on television, but I think it’s worth checking out.