REWRITING AMERICAN HISTORY, ONE EPISODE AT A TIME: AMERICA UNEARTHED

AMERICA UNEARTHED on the History Channel

Pros: Interesting topics and much food for thought

Cons: Arguments made don’t entirely hold up to standards of logic

Premiering in late 2012 and playing in a similar manner to some of History Channel’s other speculative documentaries, America Unearthed chronicles the attempts by forensic geologist Scott Wolter to prove his theory that “the history that we were all taught growing up is wrong.” I first saw Wolter when he appeared on a two hour documentary special about the Templars in America that focused heavily on the Kensington Rune Stone that some people believe represents a pre-Columbian land claim. The entirety of the Unearthed series expands on the basic premise of that special, as Wolter travels across the country examining mysterious locations, deciphering clues and evidence, and attempts to make a case for various alternative theories of American history. 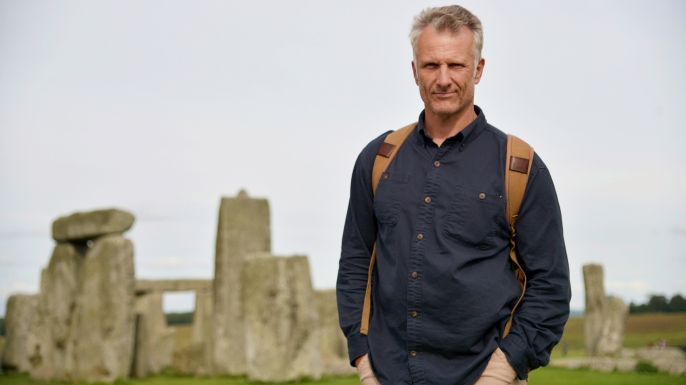 Earlier on in the show’s run run, Wolter seemed determined to reinforce the idea that Christobal Colon (i.e. Christopher Columbus) wasn’t the first person to discover the “new world.” Frankly, one would almost have to be completely oblivious to history to believe the notion that Columbus actually discovered America – the Vikings clearly were on the North American continent well before Columbus ever gazed out over the oceans and there’s physical proof to back up the claim. In the first two seasons of America Unearthed, Wolter went much further, exploring the ideas that groups as varied as the ancient Hebrews, Phoenicians, Minoans, Polynesians, Templars, and others came to the Americas well in advance of 1492. Another major point of investigation in the program is the idea that the Freemasons have more to do with the founding of America than most people have been led to believe. It seems like the vast majority of the episodes of this show making some reference – fleeting or otherwise – to the institution of the Freemasons. 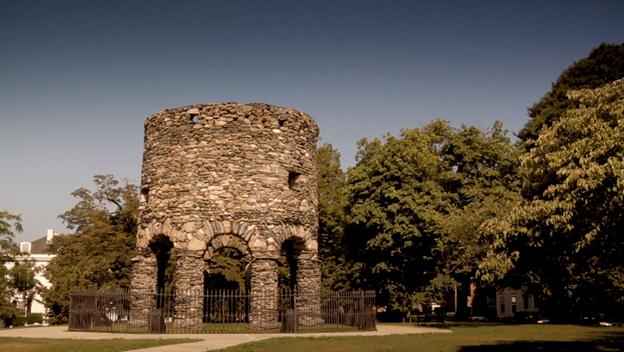 Newport Tower in Rhode Island has been proposed by Wolter as being proof of the Templars coming to America.

As the program enters its third season in late 2014, there appears to have been something of a shift in the main goals of the show and a different approach is being taken. The first episode (initially aired on November 8, 2014) dealt with the idea that Davy Crockett (the “King of the Wild Frontier”) survived his supposed last stand at the Alamo and went on to live out his days quietly in Alabama. A land claim from 1859 which is signed by someone named David Crockett forms the basis of the investigation which reveals some intriguing archival news articles as well as some insight from actual Crockett descendents. The third season’s second episode dealt with the search in Arizona for the mysterious Lost Dutchman gold mine. By interviewing local treasure hunters, Wolter tracks down potential locations for the legendary mine which has long been pursued by those seeking fortune, and pursues the idea that the shaft is hidden in plain sight. I have to say that I’m a fan of the program branching out and focusing on more a variety of topics: the examination of pre-Columbian American exploration and settlement was growing a bit tiresome after two seasons, but I somehow doubt that viewers have seen and heard the last of it.

…yeah, but did he survive the Alamo or not?

Like the vast majority of television shows these days, America Unearthed is set up as a pseudo-reality show, following Wolter around as if a viewer is tagging along on his everyday activities. Some episodes of the show feature more obvious reality moments and seem heavily manipulated, particularly when Wolter’s family shows up, becoming key figures in the way the show plays out. Generally speaking, the show is edited in the same manner one would expect a mystery to, with text messages and phone calls appearing at opportune moments to provide a much-needed clue when the investigation hits a (potentially literal) brick wall. Clearly, there’s some level of scripting and planning going on behind the scenes – many of these situations seem a little too convenient to be representations of reality – and this leads to the major problem I have with the show.

Logic frequently doesn’t seem to be one of this show’s strong points.

As is the case with a indisputably interesting but untrustworthy show like Ancient Aliens, there’s simply no way I can buy everything presented in this show as being absolute fact. To the program’s benefit, there does appear to be some level of science being applied to the investigations here since Wolter makes every effort to authenticate various artifacts he finds. Still, his final conclusions at the end of most episodes very nearly seem to be pulled out of thin air with scant evidence used to back them up. In the case of the Crockett land claim, Wolter examines the handwriting between a known Crockett signature and the one featured on the claim, and even though the two samples don’t look identical, concludes that the same David Crockett actually signed both, explaining the differences in handwriting to the fact that Crockett would have been quite elderly by the late 1850s. I should say that I have seen Wolter straight shoot down some theories that he’s been investigating (his examination of Rockwall, TX proved that the massive underground “wall” surrounding the town is an entirely natural phenomenon and not the result of an ancient civilization’s construction program), but more often then not, he concludes the show by making an ambiguous claim that contradicts what most people would accept as being historical fact. 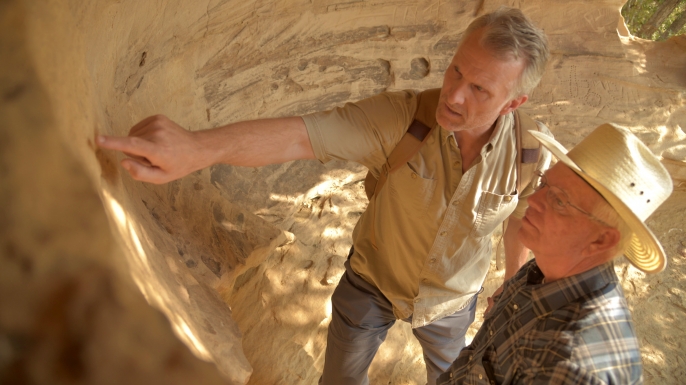 While he’s a forensic geologist by trade, Wolter more often comes across as a sort of bootleg treasure hunter, the Jeff Meldrum of the archaeological world.

In short, it seems as though the show’s underlying goal is to throw a wrench in the established history of the United States, and it often seems as if the logic used in getting to a point where an outrageous claim can be made is rather suspect (the same thing can be said about any of the arguments put forth in Ancient Aliens or the related In Search of Aliens). In some ways, this isn’t an entirely bad thing: it makes this show very intriguing for a viewer who has a working knowledge of American history. I also like the fact that America Unearthed gives the viewer a wide variety of enigmatic locations, artifacts, and ideas that he can then research on his own and make up his own mind about. I guess my point is that a viewer shouldn’t mandatorily accept everything and maybe even anything this show has to say…but that is pretty much par for the course on TV anymore.

The show’s producers seem to realize that some of their arguments aren’t exactly unflappable, and they’ve designed this show to be super slick and efficient. It’s photographed and edited very competently, and the use of dramatic music really heightens the impact of certain sequences. There’s a watertight organizational structure that acts to keep things straight in a viewer’s head: maps show the locations where Wolter’s investigation is being conducted and point-by-point lists establish the “facts” as Wolter has established them. Though, like The Curse of Oak Island, America Unearthed isn’t the most exciting program on television, I think the topics discussed in the show are rather fascinating and Wolter is an agreeable enough host/main character. The program as a whole definitely would appeal to history buffs, though perhaps not to those who are close-minded with regard to new ideas or alternate ways of thinking. America Unearthed certainly winds up causing more controversy than providing definitive, provable solutions and/or answers, but I think it’s worthwhile as thought-provoking television and would recommend it.