While vacationing in Europe, a walking cripple by the name of Dr. Donald Blake stumbles upon a group of alien invaders in the countryside planning to attack and takeover the Earth. Their mission requires them to eliminate anyone whom discovers them, and Blake is soon spotted and chased. He ends up trapped inside of a cave where he finds a walking stick, and due to frustration he strikes the wall and is immediately transformed into the thunder god of Norse mythology, The Mighty Thor. -summary

Thor made his first appearance in 1962 in the already running series Journey Into Mystery, and he would eventually catch on and earn his title in the form of The Mighty Thor. Despite his ups and downs and eventually losing popularity to the Incredible Hulk; Thor would still go on to become one of the coolest characters in the Marvel Universe with a very rabid following that counted me amongst that group. Unfortunately, these first batch of issues does very little in making a case for the thunderer as an awesome character. It’s clear that Stan Lee was searching for an identity. His writing really didn’t feel as sharp and consistent as when he was penning Spider-Man later on. This TPB collects Journey into Mystery issues 83 – 100, dated between 1962 – 1963.

Stan Lee begins things interesting enough by going through a fast run through of Thor’s strength, powers, and weaknesses, as well as developing his personality along with Donald Blake, and the reader is treated to a quick action segment against the alien invaders which ends with their fast retreat. From here, Lee tries to find Thor’s place amongst Earth’s people as he deals with their criminal element, plus he introduces Thor’s evil brother, the God of Mischief, Loki. 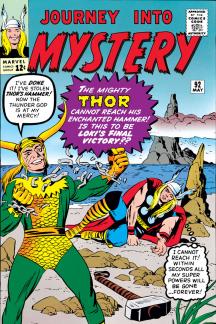 At least for me, Thor had to be among the weaker books at this time. It’s constantly mentioned that Donald Blake is a lame whom is in love with his assistant Jane Foster, and there’s this constant reference on how Thor and Donald are polar opposites; along with Jane conflicted on which man she loves the most despite not knowing Thor and Blake are one in the same. She admires Blake as a sensitive and caring man, but loves Thor for his strength and heroism. This is good material to rope in the reader but it’s constantly beat upon. While this repetitive writing style was understandable back then and at any point in the world of comics; it reads badly in a collected edition as it feels way too monotonous.

Thor himself greatly suffers from repetition as well. His main weakness comes in the form of being separated from his magical hammer. If he loses grip of his hammer for 60 seconds then he will revert back to Blake. This is a gimmick that Stan Lee relies on too heavily here, and this is a weakness along with Superman’s vulnerability to Kryptonite that always annoyed me anyway. As far as Thor’s building rogue’s list is concerned, Loki is the only one of any interest as he constantly plagues Thor.  The random gangsters, communist leader, and batch of villains whom never amounted to anything just never really gripped me, and the most fun I had reading this took place during the Norse mythology settings.

Jack Kirby’s artwork did a lot of justice carrying Lee’s repetitive writing. The imagination put into Thor’s look indeed works, and although the action isn’t very physical it’s still decent enough to arouse some interest. I especially enjoy the fantasy element taking place in the Norse settings. Although this was far from his best work, Kirby was still brilliant with the pencils and I can only imagine what he could have accomplished with today’s advanced techniques.

These early Thor stories were indeed a struggle and it took a while before it really started to move, at least to my experience anyway; with the exception of the artwork I can’t really think of anything to actually call great here. The stories ranged from average to boring and I can’t read this book in one sitting. I can only recommend this to hardcore collectors and readers whom still have a very soft spot for this era of comics. To those whom are more into modern comic storytelling, try out the fourth volume of the Thor Masterworks TPB’s and work your way down only if it really arouses your interest.