WHEN SIZE IS ALL THAT MATTERS: UNHUNG HERO

Cons: Juvenile approach; listening to Moote repeatedly whine about his small package gets old really fast and the film is essentially pointless

Premiering at the 2013 South by Southwest Film Festival, Brian Spitz’s documentary Unhung Hero supposes to tackle the age old question of whether or not penis size actually matters in the bigger picture of human sexuality. Numerous studies and surveys have been focused on this issue over the years, but rather than approach the subject with a more scientific or sociological approach, the film mainly deals with stand up comedian and actor Patrick Moote’s quest to enlarge his “below average” endowment. Following a video in which Moote’s girlfriend rejected his marriage proposal on a stadium jumbotron cam went viral on the internet, Moote learns that one of the reasons his potential wife said no was that she thought his penis was too small. This leads him on a worldwide quest to investigate various, increasingly outrageous methods to increase the size of his member. Eventually, Moote comes to realization that – surprise! – he should just learn to accept what he has and find someone who can appreciate him for who he is rather than what’s in his pants. You know – basically the same damn thing that’s always said in regard to this question.

I’m not sure that THIS (i.e. sneaking a hidden camera into a Korean mens’ sauna) is the best approach to making the documentary…

Playing a bit like Morgan Spurlock’s Super Size Me in that Moote tries various methods for himself to see if he can get any substantial results, Unhung Hero winds up seeming like little more than a superficial and rather pathetic film in which a viewer is subjected to a man with low self-confidence getting down on himself and whining about the size of his junk for an hour and a half. It’s all but been proven by now that there’s really no way to safely and effectively increase the size of the human penis, but that doesn’t stop Moote from ingesting all sorts of pharmaceuticals claiming to make him “LARGER” or sticking his penis into one pump-like device after another with minimal results. When the narrator/star of the film winds up in a hotel room in Papua New Guinea seriously considering letting a half-assed guru inject ten shots of oil into his penis, the film truly hits rock bottom and gives the viewer a precise insight into just how shallow and sad Moote’s effort really is. Though penis size does matter to some people, in the end these types of “miracle cures” just seem ludicrous – and downright dangerous, and the film – which essentially revolves around one man’s continued insistence that he’s not exactly packing heat – becomes more annoying than anything else. 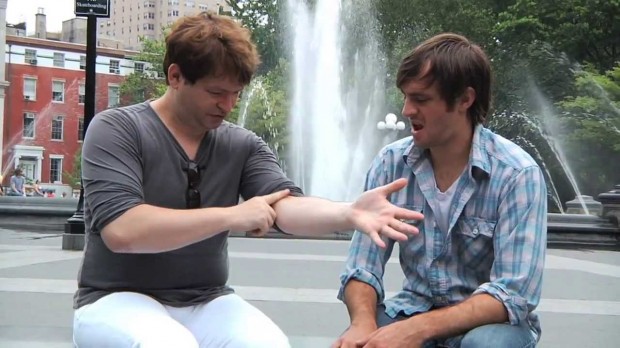 The look of shock says it all.

To be honest, I think a decent documentary could be easily made about this subject: as an American society especially, we seem to be particularly out of touch with just what exactly constitutes average size. This is largely due to the fact that as a culture, we’ve been (as sex advice columnist Dan Savage points out in the film) “pornified.” Most men gauge their sexual prowess on what they see in the pornographic films they come across – and porn notoriously features men whose endowments are well above average and therefore, generally unrealistic. A few segments in the documentary also utilize clips from various television shows and movies which relate the idea that popular culture has identified small penis size as a source of humor, thus creating even more problematic notions about male sexual identity. Unfortunately, Spitz’s film never really deals with those more far-reaching and I daresay more important ideas and issues; instead, it focuses squarely on one man’s quest for size at the expense of most everything else.

Yeah, I’m not sure about that either.

Operating in much the same way a Michael Moore picture would since it focuses attention on the narrator himself and his personal story rather than on the underlying subject of how much penis size actually matters, Unhung Hero comes across as a feature length penis humiliation study, with most of the interviews in the film only seeming to confirm Moote’s feelings of inadequacy. Of course, when Moote mingles around a porn convention and sexual liberation parade in San Francisco looking for advice, he’s not exactly getting the true “man on the street” perspective. It also becomes increasingly difficult to swallow much of anything from a narrator who seems so singularly concerned with what he’s packing in his pants. If this guy is that convinced that he’s a failure in life just because he has a small dick (and he’s all too willing to admit this to any and/or everyone), I’m not sure much of anything would change his mind, and when the narrative becomes especially forced when Moote starts to question his willingness to even participate in the film, the picture loses most of what little credibility it had left.

A hot dog suit and a sign that reads “Wiener Talk?” INSTANT RESULTS!

To its credit, the film doesn’t completely ignore homosexual attitudes about the subject and it does include a few tidbits of information about how male sexuality is approached around the world and how it has been looked at throughout history. Several researchers throw in their two cents on the subject, as do porn personalities like Annie Sprinkle and Ron Jeremy. The film saves its best insight for last: sex columnist Dan Savage probably has the most interesting perspective in the film, and Jonah Falcon (widely reported to have the biggest measured penis in the world) also provides some startling remarks. Certain sequences here up the shock value substantially (including an actual penis enlargement surgery that’s briefly glimpsed and also the sight of a Chinese man lifting some 300 pounds with his erection), but legitimate, prescient information in the commentary from Moote is infrequent at best.

In a way, this is the perfect festival film: it’s all but guaranteed to promote discussion but it doesn’t really have much of anything important to say on its own. As such, I found that the documentary operated as a sort of “cheap pop,” tackling its issues in a lazy, convenient manner that didn’t really require much effort or sincere analysis and investigation on the part of the filmmakers or narrator. Unhung Hero tries to get the point across that size isn’t everything, but this is the same message that’s been put forth time and again by a multitude of studies. Playing mostly like a complimentary pat on the back for any male viewers who have it in their heads that they are sexually inadequate (during the course of the film, Moote strikes up a relationship with in the end provides an “all is right with the world” conclusion to the narrative), the documentary is capably made and has some amusing and/or shocking moments, but a viewer ultimately gains nothing from sitting through it: it’s sensational just for the purpose of being sensational and has no ground-breaking perspective on an undeniably intriguing subject. I’d advise most viewers to skip Unhung Hero: a good documentary could certainly be made about this topic, but this simply isn’t it.

Widescreen DVD from Breaking Glass Pictures has a trio of deleted scenes, two extended interview segments, a Q&A interview, and a commentary with both the director and star/narrator. This special features package is pretty decent, but I personally had about my fill with Moote from watching the film itself.

7/10 : Strong four-letter profanity and a literal ton of crude sexual content. Not for the easily offended – though you probably knew that.

8/10 : Strong sexual content throughout, including brief glimpses of explicit sex and full frontal nudity. I really doubt anyone would be turned on by this film.

7/10 : It’s safe to say (considering the multi-billion-dollar “male enhancement” industry) that some people out there would be very interested in this documentary.

“…but if this goes wrong, your wiener will be unusable for life – is it worth it?”

Trailer: (Warning – NOT SUITABLE FOR WORK!)