A FAIRLY UNIQUE BUT PROBLEMATIC UNSOPHISTICATED RPG FOR THE NES: TIMES OF LORE

TIMES OF LORE for the Nintendo Entertainment System

Set in medieval-like fantasy land of goblins, ghouls, wizards, and dragons, Times of Lore seems less a typical NES-era role-playing game and more an unconventional adventure game. Originally developed by Origin Systems (known for the Ultima series of games) and ported for the NES in 1991 by Toho Co, Ltd. (best known for being responsible for the Godzilla film series and related games), the plot in Times of Lore is pretty typical stuff. The once prosperous kingdom of Albereth has fallen on dark times following the disappearance of the king. Now, the player must choose between three heroes (either a knight, a barbarian, or a valkyrie, all of which are absolutely indistinguishable from one another) tasked with not only uncovering the truth behind the king’s disappearance, but also restoring light to the kingdom by completing a handful of missions and eventually defeating an evil priest. Ho hum. Along the way, the player must traverse a rather large map, questioning townspeople, shop owners, and others to find out clues regarding his tasks while battling various monsters also roaming the countryside.

Overhead, main gameplay screen – it becomes quite difficult to distinguish the sprites from the background at times.

For all intents and purposes, Times of Lore plays like a significantly less complicated game of the Dragon Warrior variety. The player’s path through the game is gradually uncovered through conversations with various non-playable characters which reveal certain keywords that can then be inquired about, thereby building up a sort of pool of information (in the use of keyword-driven conversation, the game is somewhat similar to the SNES title Shadowrun). Many times, furthering the story requires a player to journey from one town to another in search of specific citizens to question and arguably the most fun thing to do in this game is simply exploring the vast world in which the game takes place. Even if Lore begins at a pretty familiar starting point however, this game has plenty of odd quirks about it that make it fairly unique in the lineup of 8-bit RPG’s.

The world map in use here is vast with a plethora of areas to explore.

For one, the player can freely roam throughout the map (which is seen throughout the game from an overhead perspective) from the start of the game and in real time. The real-time gameplay means that there aren’t glorified battle sequences here: fights occur in a rather low-key manner when a player stumbles across nearby enemies on the map and are accomplished primarily through button-mashing not strategy. Since enemies can be spotted in advance, it’s almost possible to avoid most battles by simply steering clear of the sprites. It’s also worth noting that there are precious few cut scenes or loading screens in this game. This makes for a somewhat odd RPG experience – towns merely show up on the overworld map without the game drawing attention to them. I rather liked that the world seemed very lived in (at least as well as could be achieved on the NES) since townspeople simply wander around the countryside going about their daily activities and the fact that the player really can go anywhere and do anything he wants to at any point during the game is a definite bonus, but this sense of freedom does lead to a few problems.

Chit chatting with townspeople is the only way to progress through the story and game.

One of the main things I noticed about this game is that it’s actually rather difficult to figure out one’s course of action throughout the game – before I discovered online “how-to” guides, the only way to get through the game (or at least try to) was literally to stumble around the map and advance the story simply by covering every base through the process of elimination. This of course was frustrating and often fruitless – it seems to me that the game developers just mishandled the manner in which the story plays out and is revealed to the player. Questioning various townspeople and other non-playable characters encountered throughout the map is the only way the unraveling story is progressed, but individual dialogue passages that reveal vital information can often be skipped entirely – if one isn’t really paying attention during key moments, he’ll likely have no clue how to proceed through the game – or know why the hell he’s doing one thing or another. Luckily, the game developers have included a sound effect to let one know when something important is said to the character (generally, sound in the game and the music is OK if repetitive), but the whole of the “script” as it were for this game is still unnecessarily complex and convoluted. I really doubt that kids in 1991 would have been able to make any sense of it.

Hell, for as much sense as this story would have made to kids circa 1991, it may as well have looked like this.

Another issue with the game is the graphics. Despite the fact that the map itself is impressive in terms of its scale and detail, the color palette used was poorly designed. This becomes especially noticeable when one realizes that some enemies drop items (gold, scrolls, potions, etc, the vast majority of which seem mostly worthless) that can be picked up and used by the player. These objects are often virtually impossible to spot on the backgrounds: I often found myself doubling back into areas I had already covered for the sole purpose of finding out if enemies I had defeated had dropped something. Furthermore, even though the NES controller only has four buttons on it, the controls in this game are incredibly frustrating. Essentially, one of the two red buttons (“B”) brings up the status menu which allows for items to be picked up or used and conversations to be initiated and the other button (“A”) attacks. I can’t tell you how many times I accidentally attacked a friendly non-playable character simply because the control system in the game doesn’t make much sense (for instance, the A button has to be used to continue dialogue passages, but then will instantly attack when the status menu is closed). To some extent, the programmers have mitigated the damage caused by accidental attacks (if the player leaves the area and comes back later, the non-playable characters will have returned and/or won’t act in a hostile manner). Still, it seems there are many concessions made on the part of the programmers for problems that simply shouldn’t have been an issue in the first place for a finished game. 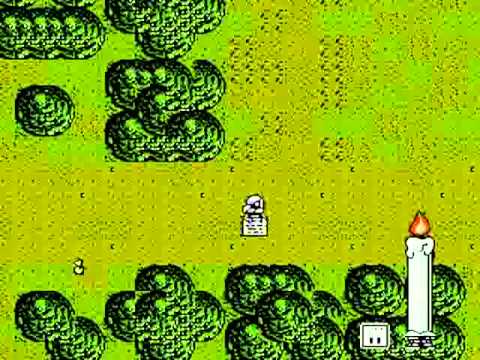 Times of Lore is graphically unimpressive to the point of being ugly to look at.

By far the biggest problem with here is the sense of difficulty present. Initially, Times of Lore seems unbelievably difficult. This problem is made worse by the fact that the player’s life is indicated onscreen by an image of a candle: when the candle burns low, the player is nearing death. Unfortunately, there’s no real gauge for how many hit points the player is losing at any point, so it’s very easy to be overwhelmed quickly and killed – especially by swarms of enemies. Additionally, the player’s character at the start of the game moves incredibly slowly onscreen and has massive issues with regard to turning and facing another direction (essentially, after moving in a certain direction, the onscreen character will continue to face that way for a few seconds after his direction has changed). This makes attacking groups of enemies particularly annoying, and a player really has to get acclimated with the eccentricities of this game in order have any amount of success getting through it.

Menu-driven commands wind up defeating all the serious enemies in the game. And the ending? A major disappointment.

All that said, at a certain point in the game, Times of Lore becomes so ridiculously easy that it poses virtually no challenge to a player at all. There are no experience points to gain during the course of the game and precious few items to pick up, yet when a player purchases the boots (which allow for much faster and relatively easier travel on the ground), he can successfully avoid almost every single instance of combat in the game from that point onward by avoiding and outrunning enemies. Making matters worse is the fact that there are no “boss” type battles in this game at all: every one of the big, fearsome enemies is defeated through use of a particular item and none require the player to defeat them in combat. At a certain point, then, Times of Lore becomes more or less a cakewalk since there’s minimal challenge in completing the game. This makes the game’s finish (which is painfully mediocre to begin with) seem all the more disappointing. Finally, I should point out that this game is very short in comparison to other NES-era RPGs. If a player knew what he was doing (and/or had access to a walkthrough or guide), I bet he could finish this game up in an hour or two – a significantly less time than it takes to get through a more substantial RPG from this era.

Even the game over screen is lousy…

Considering the amount of glaring problems in this game, it might come as a shock that I still rated it three stars. Try as I might to hate Times of Lore, the game is fun even if it plays like a very lite RPG that’s no match for the likes of Legend of Zelda or Final Fantasy. This game has a metric ton of problems associated with it and looks pretty awful in terms of its graphics, yet I have to give the developers credit for making a game that was a bit different from just about every other RPG title for the NES. Not everyone would have the same opinion I do (hell, I could see many gamers becoming incredibly frustrated with this title in a very short period of time), and I’m not sure the payoff is worth the effort and frustration needed to play through this thing, but fans of old-school role-playing games might appreciate what the title does have to offer. It’s not a masterpiece by any stretch or even one of the better games for the system, but Times of Lore certainly is an interesting, offbeat little title that I’d give a moderate recommendation to.