REAL-LIFE DAYS OF THUNDER RACING RIVALRY PLAYS OUT IN RUSH

Cons: Ending was a bit on the soft side; selection of popular music on the soundtrack could have been better

Having been a fan of Formula 1 for decades, it’s always struck me as surprising and unfortunate that this form of auto racing, easily the most popular in the world, has never quite caught on in the United States for one reason or another. While NASCAR drivers typically circle around painfully similar tracks week in and week out, F1 travels to some of the most challenging and varied courses the world has to offer, with most every race playing out as high drama – particularly for those familiar with the intricacies of the sport. With the construction of the America’s first purposely built F1 circuit (Austin, TX’s Circuit of the Americas, which opened in 2012), Formula 1 appears to have finally gotten some sort of foothold in the United States, and over the past couple of years there have been a handful of films dealing with the sport.

A sampling of Ferrari’s Formula 1 machines from over the years, from clunky bombs to jet planes on wheels.

Ron Howard’s 2013 feature Rush operates in roughly the same manner as the excellent 2010 straight documentary (which chronicled the man perhaps rightfully regarded as the best F1 driver in history) in that it focuses its attention on Formula 1’s past and plays like a biography dealing with two of the most legendary names in the sport. The film opens by introducing two young and hungry race drivers working their ways up through the ranks of Formula 3 in Europe. Almost immediately, there’s a sharp contrast between a carefree British driver named and perfectionist Austrian named : the two clash instantly on the track and a rivalry which eventually stretched across the globe was born. Flash forward several years and the pair of drivers have made their way into Formula 1, the most prestigious, high-tech, and outright dangerous form of auto racing in the world. Lauda has landed on F1’s biggest and most famous team Ferrari, while Hunt has struggled in driving for smaller and more cash-strapped organizations. Going into 1976, Hunt lands a spot on the McLaren team, arguably the “best of the rest” in the world of F1, and this sets up an epic and extremely dramatic fight for the points championship with Lauda. The main body of Rush documents this season and the ramifications it had for all parties concerned.

Howard’s film plays a bit like Days of Thunder if it was more realistic and based on actual historical events, with the brash, playboy James Hunt serving as the “Cole Trickle” type character while the wily and calculating Lauda seems like the grizzled veteran “Rowdy Burns.” Written by Peter Morgan, Rush emphasizes the differences between its main characters throughout, and details the frequently tense on-and off-track interactions that defined the relationship between Lauda and Hunt and the men themselves. A viewer really gets the idea that these guys may not at all have liked each other (at least initially), but they had to respect one another when both were piloting what amounted to a bomb on wheels that was traveling some 150 miles per hour around twisting and turning racetracks while only being inches apart. Acting from Chris Hemsworth (as Hunt) and Daniel Brühl (as Lauda) is outstanding: the two actors not only have a wonderfully compelling rapport with one another, but really seem to have identified and accentuated the true nature of their characters. It’s interesting to note that Morgan’s script and Howard’s direction seem most often to take the standpoint of Lauda, the character who comes across as the “villain” at the onset of the film. Though Hunt appears to be living the life that every male race fan would dream of, it seems like part of the goal of the film is to suggest that Lauda’s story is actually the more heroic, uplifting, and ultimately triumphant.

The pair as depicted in the film: Chris Hemsworth (left) as Hunt, and Daniel Brühl as Lauda.

Even if F1 is the most high-tech racing found in the world, in the 1970s, it was incredibly dangerous. The film drives home this point right from the beginning with the declaration that “twenty-five drivers start every year in Formula 1 and each year, two of them die,” and that statement is absolute fact. The racing scenes in Rush capture the “shake, rattle, and roll” – and overwhelming noise – of auto racing in a gritty and absolutely mesmerizing manner, and never quite allow the viewer to forget that these drivers are often quite literally teetering on the brink of life and death. The film visualizes several extremely nasty accidents (the moment early in the film where driver Francois Cevert is decapitated at Watkins Glen, though somewhat low-key in how it’s presented, really reinforces the dangers of the sport) and eventually, there are some incredibly harrowing scenes here. Midway through 1976, Lauda is horrifically burned in an accident at the German Grand Prix while leading the points standings, and the scenes relating to his medical treatments are excruciating to watch. His eventual return to the sport in just a few weeks later stands as the story’s almost obligatory “overcoming the odds” angle, but the script also takes time to point out that there are things more important than winning.

To an extent, Rush is more effective as a dramatic film than as a pure action picture, but the action scenes that are here are absolutely fantastic. Editing throughout the piece is very crisp and purposeful, seeming to alternate between focusing on the humans in the midst of the action and on the mechanical beasts that they are attempting to wrangle. Camera angles during the picture frequently place the viewer right among the race participants, and we often seem to be on the verge of banging wheels with either Lauda or Hunt ourselves. I noticed a few times when the digital effects looked a bit jerky (especially during one key racing sequence), but I really appreciated the attention to historical accuracy in terms of depicting the race cars and courses of the 1970s. It was really cool for me, as a fan of F1, to see these vintage cars in action around tracks that haven’t been used in years – the epitome of which is the immense and unbelievably hazardous Nürburgring. The occasional use of on-screen graphics does a fine job of establishing the basic facts relating to this story, and the film’s sense of pacing is excellent since it seems to focus just the right amount of time on the home lives of the characters without becoming sappy or boring. Hans Zimmer provides a typically pulse-pounding and rousing music score for the story to play out in front of, and even if I thought the selection of popular music was a bit on the cheesy side, these tunes solidify the setting in which the story takes place very well. 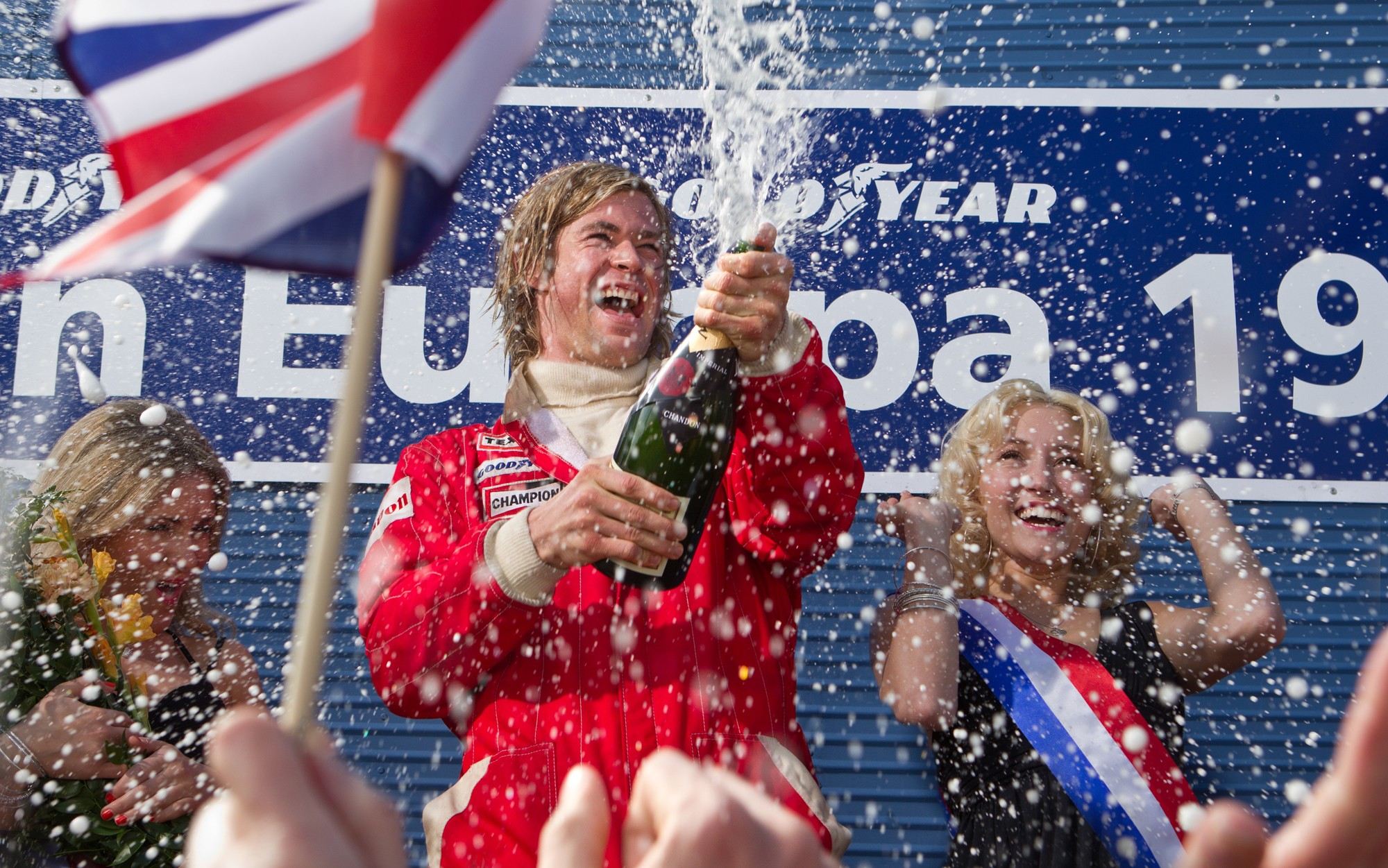 Like most sports dramas, Rush has plenty of triumph and tragedy.

Though the film takes a few liberties with its telling of the story and seems to add intensity to the rivalry between Hunt and Lauda that may not have actually existed, to me Rush seemed fairly accurate which is commendable in itself. Considering how compelling this film is both for its technical aspects and for its dramatic storyline, I’d have to call it one of the honestly better films I’ve seen in a while and a return to form for director Howard, whose career has been up-and-down in recent years. Admittedly, I probably enjoyed this film more than most simply due to the fact that I recognized the names, places, cars, and circumstances being discussed, but I think most viewers would get caught up in this intriguing story if they gave this film a chance. Despite the fact that it operates in a generally similar manner to just about every other sports biography or drama that’s out there, I’d have to call this simply outstanding cinema. Check it out if you get a chance.

Widescreen Blu-ray from Universal includes a selection of deleted scenes, a piece focusing on director Ron Howard’s approach to the film, a multi-part “making of” feature, and a trio of documentary segments dealing with the real life story behind the film. A very nice video package overall.

6/10 : Shows the dangerous side of auto racing without flinching; some of the scenes dealing with Lauda’s medical treatments are very disturbing and graphic.

7/10 : A healthy dose of profanity, featuring many f-bombs and occasional crude remarks.

5/10 : Sexual situations pop up several times during the film and occasionally include brief glimpses of topless nudity.

5/10 : Though this would be a must for fans of F1, it comes across as a fairly typical, if more hard-hitting than usual, sports movie.

“Happiness is the enemy. It weakens you. Puts doubt in your mind. Suddenly, you have something to lose…”