PURPOSELY CHEESY BUT NOT ALTOGETHER FUN: TALES FROM THE CRYPT PRESENTS DEMON KNIGHT 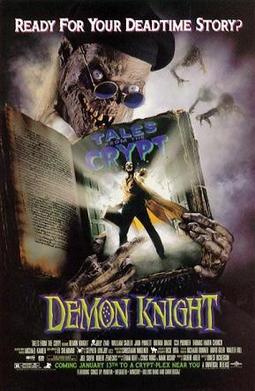 or DVD at Amazon

Pros: Special effects are great; plenty of goop and gore

Cons: It’s done in by an unfunny and painfully predictable script and doesn’t deserve the Tales from the Crypt endorsement

Though it carries the name of the popular EC Comics line that was eventually turned into an HBO horror anthology series, 1995’s Tales from the Crypt Presents: Demon Knight was originally planned to be a standalone film unrelated to the comics or series. When finally produced for the screen, a “movie within a movie” wraparound sequence was concocted using the familiar, skeletal “Crypt Keeper” character who’s seen to be in the process of making a feature film of his own. After the introductory segment, the main story of Demon Knight begins, revolving around a battle between good and evil that’s not so far removed from John Carpenter’s underrated Prince of Darkness that hit theaters in 1987 (perhaps not coincidentally the year that the first script for Demon Knight was penned). Somewhere in the American southwest, a mysterious drifter checks in to a dilapidated boarding house. Unbeknownst to the (rather stereotypical) inhabitants of the hotel, this stranger is carrying the only weapon that can be used against so-called “demon knights” that are constantly trying to gain a foothold in the material world. Shaped like a key and containing what amounts to holy blood that originated during the crucifixion of Jesus Christ (cue some very odd flashback sequences), this device comes in handy when a sinister, bald-headed demon inevitably does show up in an attempt to crossover from the spirit dimension, leading to the expected showdown between the forces of light and darkness.

Yes, the Crypt Keeper has hit the big screen, but is that a good thing?

Playing as a fairly obvious (if ineffectual) tongue-in-cheek horror film, Demon Knight is never quite as clever or funny as it thinks it is or wants to be. Sure, the film occasionally pushes the outrageous factor to extremes and features a sizable amount of carnage and, since it was made before the digital age, some eye-popping practical special effects work, but the underlying script (written by Ethan Reiff, Cyrus Voris, and Mark Bishop) is way too similar to dozens of other horror films that have turned up over the years. These writers attempt to inject some sense of fun and humor into the proceedings, but despite the occasional one-liner and general sense of absurdity, Demon Knight doesn’t inspire many laughs – or thrills. Director Ernest Dickerson, a one-time protege of Spike Lee, is unable to crank up the intensity in a capable manner and the entirety of the picture seems kind of lazy, suggestive of a director who really wasn’t feeling the material and was simply collecting a paycheck here. It’s not at all surprising that these days, Dickerson does most of his work in the smaller scope medium of television. 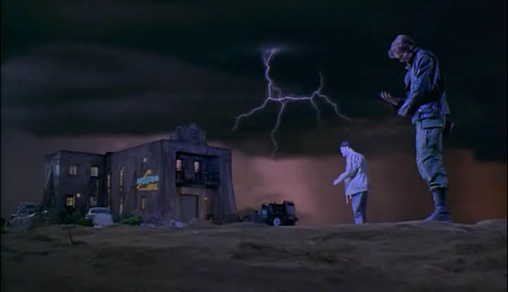 Mood throughout the film, at least, is effectively dreary and creepy.

If Dickerson’s direction is pretty languid, some of the other people working on the film at least make an attempt to give it some life. Cinematographer Rick Bota and his lighting staff make sure most every scene here is dark and dreary, establishing an appropriate downbeat and spooky mood. Though Bota’s photography itself is pretty standard stuff, the art department has done a nice job of building and dressing the sets. An opening tracking shot that rolls through a prototypical haunted house to the tune of a classic Danny Elfman main title theme, is magnificent. The special effects are also pretty impressive. Demon Knight includes the usual (large) amount of goop and gore drenching the set and characters and additionally throws numerous severed heads and arms at the camera, but I was most interested in the demons themselves, who are related to the camera through a mixture of masks and prosthetics worn by actors and full-on, very intricate animatronic creations. Even if I don’t think the presentation of these beasts onscreen is quite as good as what one would find in the best horror film, I’d be OK with comparing the quality of the mechanical effects work to what was seen in the 1982 version of The Thing, which in my mind is still a high water mark in terms of cinematic special effects. Looking at the various highly-detailed demons seen in the film, I kind of wish they’d turned up in a movie that was more worthwhile overall: having these slam-bang effects in an overall shoddy movie seems a waste.

A hammy Billy Zane controlling the legions of the undead.

A further surprising element in this film is an accomplished cast: longtime character actor William Sadler plays the drifter guarding the key as a sort of itchy paranoiac who nonetheless comes to the rescue when the going gets rough. He’s joined in his fight against the demonic onslaught by a gaggle of rather cliched characters who are portrayed by actors too good for these roles. CCH Pounder (playing the hard-headed mammy-like owner of the boarding house) and a slim and trim Jada Pinkett (playing an equally stubborn young housekeeper) turn out to be heroine characters, making this film somewhat unique in its presentation of black women occupying these roles. Meanwhile, Thomas Haden Church skulks around the set playing the obligatory scumbag member of the human party who’s all too willing to sell out his compatriots in an attempt to save his own skin, Gary Farmer shows up in the small role of a slightly dim-witted police deputy, Brenda Bakke plays a local prostitute (you just know this hotel had to have one in residence), and Charles Fleischer appears as the buffoon who loves her. Honestly, this group of characters is nearly intolerable when a viewer is forced to witness the obligatory squabbling between them: none of them are developed substantially – or at all – though I suppose one could argue that their cardboard, cookie-cutter nature was part of the “joke” that this movie was attempting to present. Dick Miller as the town drunk doesn’t fare any better than the rest of the cast in terms of his acting of characterization, but I always enjoy watching his goofy performances nonetheless and Billy Zane overacts his behind off playing the slick, utterly nefarious title character whose main job is to tempt the humans into letting him enter their world. It was somewhat amusing to see a borderline ludicrous Zane go all-out developing a quintessentially “evil” character a few years before he’d become the main villain of Titanic.

How can you not get some sort of kick out of a movie with a demon Dick Miller in it?

Generally speaking, Demon Knight is really nothing to get worked up over, and it’s actually disappointingly mundane considering that it carries the Tales from the Crypt name. It’s hard to entirely get down on a film that throws in a snarling demon version of Dick Miller or a fantasy scene involving a group of topless women trying to shower the camera with booze (keep an eye out for both Chasey Lain and Tracey Bingham during this sequence), but I wish the film wound up seeming more satisfying and original. Full of awkward moments of supposed humor and occasionally drowning in truly awful puns (part of the gimmick of the Crypt Keeper character), it’s no wonder why this script sat on the shelf for years. In the end, Demon Knight is simply a tiresome and perfectly predictable horror effort that’s moderately worthwhile only for its eclectic cast and clever special effects. Most viewers wouldn’t be missing much by skipping it entirely.

Neither the widescreen, standalone disc nor either of two double feature packages (which also include 1996’s equally sketchy ) has any extras aside from a theatrical trailer. I’d probably be inclined to get the two-fer.

8/10 : Gore galore during a handful of demon attack sequences, with lots of gruesome characters lurking about throughout the film.

8/10 : Quite a bit of strong, four-letter profanity and a few crude remarks.

6/10 : A brief but kinky sex scene and a fair amount of topless nudity.

7/10 : Fans of the comics of HBO series would probably have an interest in this, but it’s nothing remarkable.

“If you’re ready creepy, fasten your drool cups and hold onto your vomit bags. We’re going to the movies!”