A CRUDE AND RUDE UNLICENSED ZAP GUN ABOMINATION FOR THE NES: CHILLER

CHILLER for the Nintendo Entertainment System

Pros: Blood & Guts on the NES! A few clever moments.

One of the coolest yet most underutilized accessories for the Nintendo NES was the zap gun. Included with early versions of the console (in conjunction with the iconic Duck Hunt game), this device was shaped similarly to a futuristic pistol and allowed a player to “shoot” targets on the screen. As great as this prospect sounds, there were less than two dozen games that were compatible with the zapper by the time the NES has run its course, making the device seem (in much the same manner as the ) more like a gimmick than an honest part of the NES gaming experience. Most of the light gun titles operated in essentially the same way: shoot all the stuff that pops up onscreen before time and/or life runs out. Despite the fact that it’s kind of hard to screw up this established formula, one title stands on its own as not only the worst zap gun game, but perhaps one of the most terrible NES games of any type: 1990’s Chiller.

Nothing more satisfying that blasting ducks with the Zapper…er something like that.

Based on the , a game which promised – and delivered – some graphic violence and even brief nudity (note: the nudity was cut from the NES version), Chiller comes out of the horror movie universe and takes the premise of the player being a sort of ghost buster, blasting various ghosts and ghouls. Or at least that’s what the manual claims – in reality, one goes through the game not only shooting obvious monsters, but also people who have been strung up in various medieval torture devices. In case it wasn’t obvious given Nintendo’s history of censoring any title that didn’t fall in line with their strict policies with regard to content, Chiller was one of those unlicensed titles released without the Nintendo Seal of Approval, housed not in the traditional solid gray cartridge, but in a slightly misshapen one that’s a sickly-looking shade of light blue. Releasing this game without Nintendo’s approval did allow the developer (American Game Cartridges, who also released the similarly controversial Death Race, a crude predecessor to Carmageddon) to include as much outrageous content in the game as they wanted, but it also meant that the title as a whole plays like it was developed in about fifteen minutes in someone’s basement.

Chiller includes all of four static screens during the entire course of its gameplay, starting off in a graveyard before moving into a haunted hallway and finally into two separate screens which are set in a dungeon. Each screen offers the player the chance to shoot various sprites that either pop up or roam across the screen before a time limit runs out – the graveyard, for instance, has a nun pushing a baby carriage, a hand tossing human skulls into a squirming pit of doom, and even a cheerleader who can be shot to pieces. On each screen, certain objects can be interacted with by targeting specific areas of the screen with the gun, leading to a few genuinely clever moments. In the hallway, a hole can be blasted into the floor so that a woman fleeing from a giant, ghostly face falls to her doom into it and a severed hand can be shot so that it falls to the ground only to be picked up and carried away by a dog. The torture chambers offer even more gruesome interactions: a man suspended above a river of blood can be fed to a crocodile swimming below by shooting the pulley that’s holding him up, while various people can be either blasted apart or tortured to death based on where the player aims the zapper. There’s nothing quite like reaching the final screen, only to be able to not only reduce two chained humans to piles of blood and viscera but also ensure that one unfortunate man’s skull is crushed in a vice. Sound like fun? Well it is…to a certain extent. Unfortunately, a minimal amount of imagination or actual craft has gone into this title. Graphically speaking, Chiller is not only incredibly simplistic but also positively horrendous, appearing to have been one of the first titles made for the NES, not a title that was developed during the system’s heyday. It’s almost laughable to compare this to most anything else that was produced in 1990: games like the positively vibrant Ducktales, Chip ‘n’ Dale’s Rescue Rangers, or frankly most any of the hundreds of other NES titles look even more stunning when placed alongside the drab, dull, and utterly lifeless Chiller. The game’s sound scheme (which consists of a single, heinously repetitive music track and a variety of crummy blip bloop sound effects) doesn’t improve the gaming experience at all and actually makes it all the more completely infuriating. Once the player reaches the end of the fourth screen, the game simply repeats an infinite number of times until the player no longer hits enough targets to continue, or he collects every one of a series of “talismans” that appear throughout the game. There’s no honest reward for collecting all the talismans since all one gets is a congratulatory screen of text. Woo! I sincerely doubt any player would honestly want to continue playing this game after a few minutes: there simply is no point.  Did I mention this game is two player?

Speaking from a technical standpoint, the game doesn’t impress either: each time the zap gun is fired, it initiates a black screen in which all potential targets momentarily show up (in a nut shell, this is how the gun detects where the player is targeting and is essential to the gun’s function). On most games which utilize the zapper, this screen appears for such a brief period of time that it’s all but imperceptible to the human eye. The corresponding screens in Chiller, on the other hand, definitely are visible, and since a player can see where all potential targets onscreen are, any sense of honest challenge in the game (at least relating to finding targets) is eliminated.

Well that certainly makes me wanna play the game….

Knowing that the zapper is incompatible with hi-def televisions, I broke out an old tube TV to test how well the zapper works on this game and was generally unimpressed with the game’s responsiveness. Honestly, this same problem exists on most zap gun games to some extent, but Chiller sets a new standard in how poorly a game responds to zapper input. I should point out that one can play this title using only the controller, but as is typically the case, the game becomes infinitely more difficult and nearly impossible at that point since a target reticule has to be manually (read: slowly) maneuvered around the screen. By the time a player using the controller has been lucky enough to hit a few targets, the time limit will almost certainly have been reached.

Every screen in the game is seen in this review. As Porky Pig would say…THAT’S ALL FOLKS!

I recall many times looking over the display box for Chiller at the local game rental shop and can now safely say that I am most glad that I did not choose to rent it at any point. (Considering that the cover art proudly proclaims that “Dead People Are Cool,” I’m unsure how I could possibly have resisted this temptation…) It boggles the mind that a game not only this short and unsubstantial but also this undeniably shoddy would even be sold at any point, and I can only imagine how disappointed I would have been had I wasted my hard-earned allowance on a complete P.o.S. like this. While some unlicensed NES titles were equally as good and maybe even better than their licensed counterparts, a truly reprehensible game like Chiller throws a bad light on these frequently quirky, very obscure titles as a whole (I can safely say that the infamous Bible Adventures – you know the game where – looks flawless in comparison). In the end, I would urge any vintage gamer – even those who, like myself, are fascinated with the unloved and neglected titles out there – to avoid Chiller at all costs; surely, there are much better ways to kill time than this. 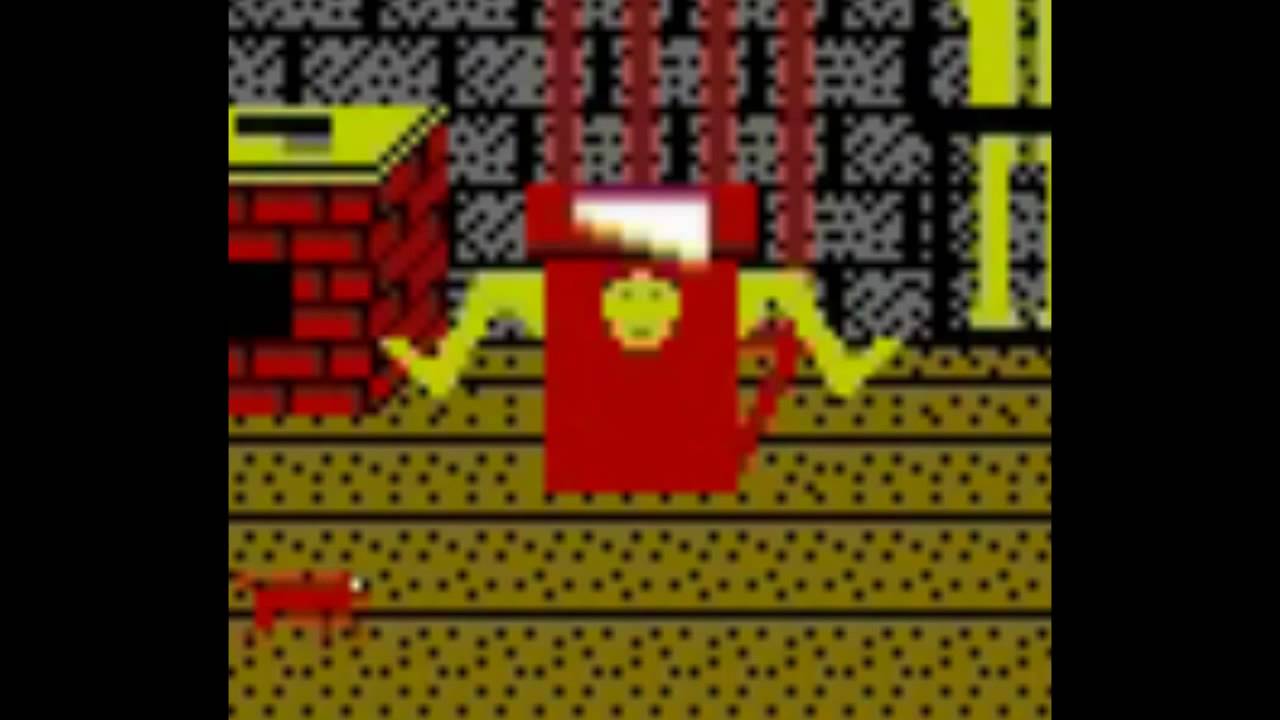