AN OVERLOOKED CLASSIC FOR THE SNES: SHADOWRUN

Among the many role-playing games for the Super Nintendo Entertainment System, a few truly stand out as being wholly unique. Earthbound, for example, switched up the setting from a medieval-like fantasy-like world to a sort of deranged interpretation of America, while Chrono Trigger threw time travel into the mix as a wild card element. It’s safe to say however that no RPG for the system was quite as odd as Shadowrun, based on the pen and paper game of the same name and developed by Data East for release in 1993. This game is set in a dystopian future ruled by all-powerful corporations (could it be that the game developers actually predicted how modern society operates?) and plays out much in the manner of an old-school film noir story, albeit one that has orcs, dwarves, dragons, and magicians as peripheral characters and enemies. 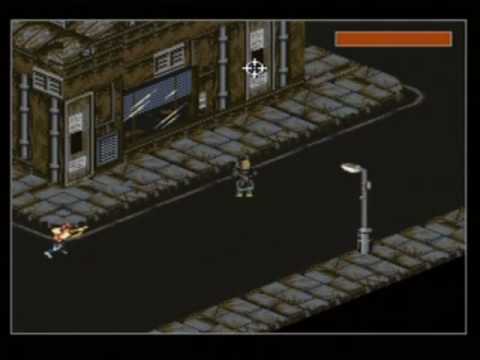 Main perspective of the game, showing Jake (center of screen) fighting off a pair of enemies.

Taking place in a cyberpunk version of Seattle, Washington in the year 2050, the player assumes the role of Jake Armitage, who wakes up in a mortuary. As seen in the game’s prologue, Jake has been gunned down by unknown assailants only to be saved by an equally enigmatic shape-shifting fox (ok, so this game does have some weird elements to it…bear with it!). Unable to determine how he got to this point, Jake embarks on a mission to try and uncover the circumstances leading to the attempt on his life, eventually uncovering a plot in which he was used as a courier for one of the corporations, having vital information implanted in a computer inside his head. As the game progresses, more and more of the plot details surface as Jake has to take on a variety of increasingly unusual boss-like characters, including a rat shaman, an underground club full of vampires, and eventually the head of the biggest corporation in town who assumes the form of a giant snake. Along the way, in addition to battling enemies in real time battle while seeking guidance from a mysterious figure who takes the form of a dog, Jake must use his computer skills and a device called a cyberdeck to tap into and hack “The Matrix,” a digital realm (i.e. cyberspace) in which he can manipulate various objects in the real world and uncover additional information hidden behind digital interfaces. If nothing else, you’ve got to admit that Shadowrun was well ahead of its time in dealing with these kinds of ideas – remember, this was made six years prior to the original Matrix film.

Once inside The Matrix, perspective switches to this overhead view showing the player’s progress through the digital realm.

Made very quickly by the same team that developed the quirky NES title Nightshade, Shadowrun has a plethora of eccentricities to it (in case that wasn’t obvious from my brief plot summary). The main part of the game is a free-roaming section that finds the player wandering through various nightclubs, shops, and rundown areas of Seattle and interacting with the oddball characters who inhabit it. The only way to progress through the game is to talk to various characters in an attempt to find out what they know, and this is where one of the game’s most intriguing gameplay elements takes shape. Throughout the game, Jake builds up a library of terms that he can question the non-playable characters about. It’s through this inquiry that new terms are learned and additional information is gained, and the process by which a player has to double back and talk to characters encountered previously in the game in an attempt to gain new perspective and insight makes the playing experience both complicated and incredibly compelling. Combine this notion that the game doesn’t necessarily proceed in a straight-forward manner with the fact that minute details and hard-to-find items (which are often quite difficult to spot onscreen) play a big role in how the game progresses and a player faces a game that’s nothing if not extremely challenging yet undeniably fascinating and completely enveloping.

Talking with each and every character becomes increasingly important, since it’s the only way to learn new terms and keywords and thereby further the game.

Battle sequences in the game can occur at most any time since various hitmen and assassins are continuously trying to eliminate Jake and stop his investigation. More substantial enemies also pop up from time to time along with the expected RPG game “boss” figures, and it becomes rather difficult to manage Jake’s health, particularly late in the game (the only way to fully restore Jake’s magic and health levels is to sleep in a bed, only a few of which appear in the game). Fortunately, the mystical “Dog” character teaches Jake various magical spells from time to time which not only can heal his injuries, but also allow for offensive attacks and general assistance during battle (the invisibility spell for one is quite useful). Defeating enemies in battle using one of various firearms that can be purchased at shops or through the use of magic provides Jake with “Karma,” which is essentially Shadowrun’s version of experience points. These Karma points can be applied to expand Jake’s abilities with regard to various skills, enabling him to inflict more damage, resist enemy attacks, and even function better in the world The Matrix among other things. 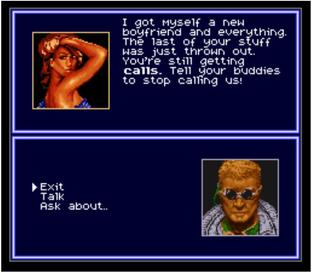 Shadowrun is probably more violent and obviously adult-oriented than most games of its era.

The ability to function in the world of cyberspace becomes more important as the game progresses, and when a player “jacks” into The Matrix, the game’s perspective switches from an isometric perspective to an overhead view that shows an effigy of Jake navigating through various digital terminals and relays. During these sequences, the game operates somewhat similarly to the familiar Minesweeper game since a player must combat various defensive computer programs that attempt to keep him from having access to sensitive information. Successfully making it through the screens in The Matrix can provide the player with money achieved by transferring funds from corporate accounts, data which further explains the rather complex storyline, or can actually manipulate objects in the real world (modification in cyberspace is the only way for instance to ensure that various elevators and lifts work as intended). The cyberspace screens in Shadowrun take a bit of getting used to and can be frustrating until one gets the hang of how they work, but I found this to be one of the most clever and fun aspects of the game. 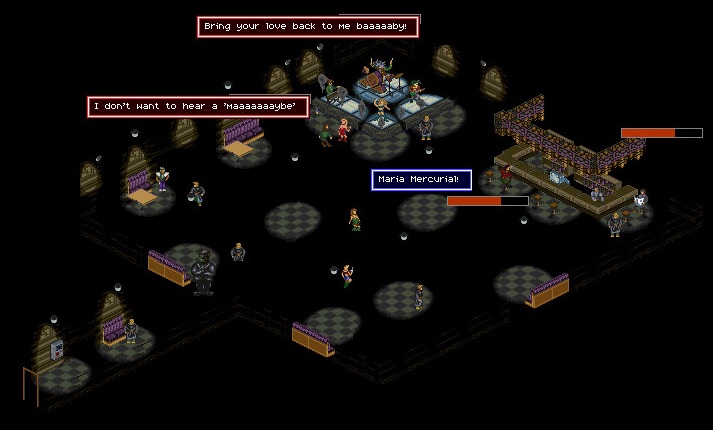 The setting of the game includes several nightclubs populated by a colorful cast of characters.

Shadowrun gets its name from in-game characters known as “shadowrunners” who act as mercenaries of sort that can be recruited by the player to aid his journey through the storyline. Hired for a limited amount of time, all of these characters (of which there are a dozen) have a specific skill set and range of abilities: some are valuable more for their ability to fight enemies, while others specialize in magic or are computer specialists. It’s worth noting that at no point is it entirely mandatory to hire any shadowrunner: one can make it through the game without hiring any of them. These characters can however come in handy during certain parts of the game and do allow a player to accomplish things he would not otherwise be able to do.

The real-time battles in the game are often quite challenging.

Graphically-speaking, Shadowrun is a really nice-looking game that made the best of the 16-bit capability of the SNES. The entire world has a run-down, grungy look to it, with squalor and low-life characters lurking in the periphery of the more destitute sections of town. During the last section of the game, the player finds himself in the more bustling downtown district, which looks appropriately futuristic and imposing, with huge skyscrapers and more high-class, glitzy nightclubs. The soundtrack for the game (written by Marshall Parker) perfectly captures the menacing vibe of the game and has a hard-edged, industrial feel to it. My personal favorite aspect of the game are the character portraits, all of which are intricately detailed, plenty strange-looking, and occasionally downright creepy. I could probably make a case for Shadowrun existing as a cyberpunk Mad Max in terms of its story and the wacky characters found in it. 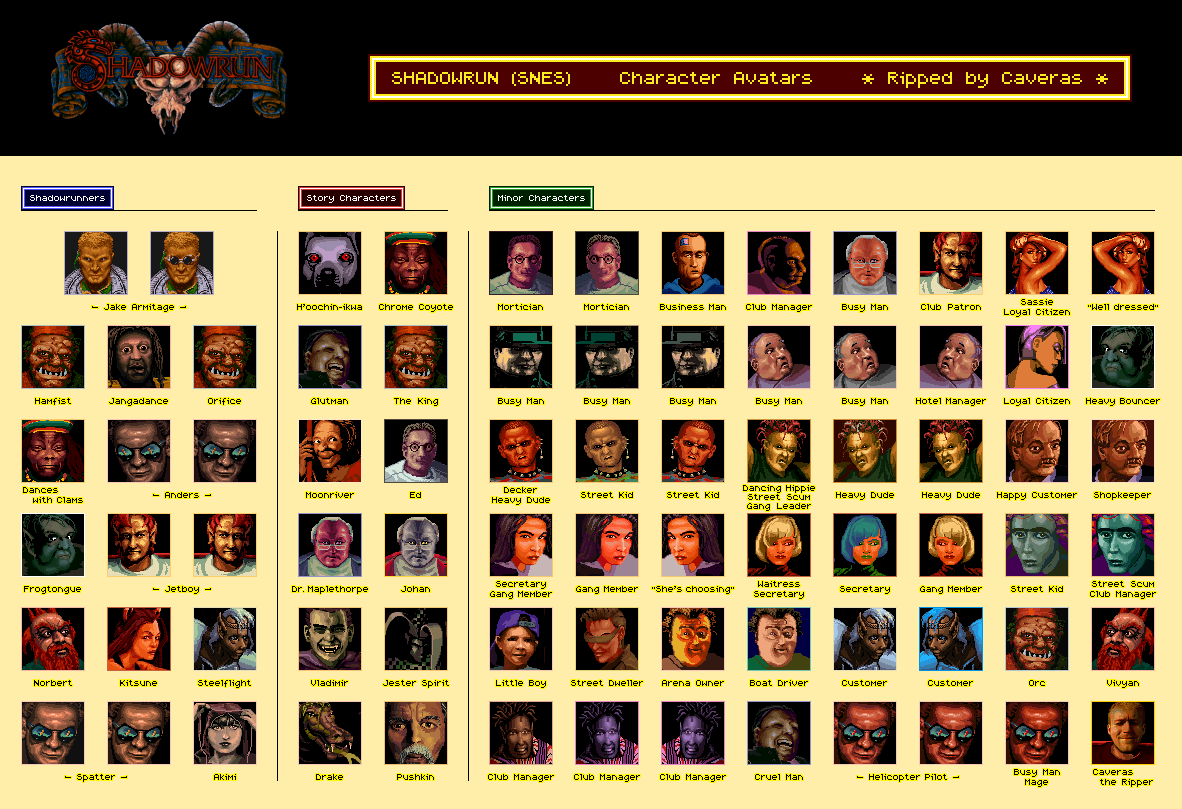 There really are many elements to this game which would be impossible to cover in the context of a review, but the player willing to devote some time to learning the ins and outs of this game is likely to find it to be an outstanding title that was largely overlooked and ignored when it came out – perhaps because it was more adult-oriented than many or most titles at the time. The game has earned a reputation since the mid-1990s as being one of the most unique and captivating games for the SNES and I’d be inclined to agree with that assessment even if the ending is fairly low-key and indicative of the fact that the whole project was rushed through production and programming. The length of the game is decent and the level of challenge offered in Shadowrun is very high. It certainly forces a player to think through and evaluate his actions as he progresses through the story (though anymore, it’s possible with the help of online guides to breeze through the game without much problem), and the ways in which this game works were quite innovative at the time. It would be hard to come up with many titles that are even vaguely similar to this one, and I’d label this as being one of the best Super NES games out there: well worth checking out for the gamer looking for something definitively different.