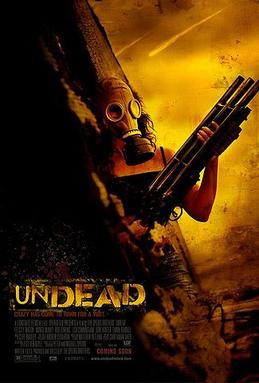 Cons: Script is mismanaged and messy; too similar to other, better zombie flicks

Made in Australia in 2003, Undead stands as one of the early examples of post year 2000 zombie cinema, released a year after the generally excellent 28 Days Later. The film deals with a zombie outbreak taking place in a small Aussie fishing village after the community is bombarded by meteor fragments. Upon landing, these space rocks cause normal civilians to metamorphose into brain-eating creatures who can only be stopped by the destruction of their cranial cavity. As has been the case with most every zombie film ever made, Undead mainly deals with the story of an unlikely, generally incompatible group of citizens as they attempt to survive the zombie apocalypse in the face of seemingly insurmountable odds. Even if the basic story would be painfully familiar to anyone who’s seen a zombie flick or three and throws too many predictable ideas into the mix, it’d be difficult to argue against the fact that this film does have some very imaginative ideas in it and is enjoyable on a purely mindless level. Unfortunately though, at some point down the line there just seems to be too much going on in the script, and the writer/director team of brothers Peter and Michael Spierig just can’t seem to corral the action and keep things focused.

Our main characters here are part of the bigger problem in this film. Ever since the genre of the modern zombie film started in 1968 with George Romero’s Night of the Living Dead, these films have often featured unlikable characters in an effort to make the inevitable struggle for survival more compelling. More often than not, one or more human characters typically winds up being more villainous than the zombies themselves – a notion that emphasizes inherent, inescapable aspects of human nature. Undead, on the other hand, doesn’t seem to have any underlying message yet features a cast of characters that’s generally unlikable through and through. Even if the film does create main, more or less heroic figures in a local beauty queen named Rene and a prototypical “tough guy” fisherman named Marion, at no point was I all that interested in rooting for any of these people. That’s doubly true for the peripheral characters – namely, a profanity-spewing, aggressively authoritarian cop and his rookie partner along with a country bumpkin couple. Of course the couple is expecting a child any minute and obviously, the woman starts to go into labor at some point during the film, but I was even more annoyed when, in the middle of an ongoing action scene in which these folks attempt to escape the zombies, the wife starts arguing with Rene about who should’ve won the beauty pageant in the first place. Talk about unnecessary drama!

If the cheap tension isn’t enough for a viewer though, the script by the Spierigs also throws in (along with the obligatory mutilated zombie corpses) acid rain that burns clothes and skin, zombie fish attacking a man’s face, and even aliens who turn up whenever the script starts to get a bit slow or run into a dead end. . At some level, these elements make the film fairly entertaining since Undead quite literally includes a bit of everything, but a viewer is never quite sure how everything going on in the film really fits together. Even after the “big reveal” moment, the story doesn’t make much sense at all: most everything here is suggestive of the fact that the writers had tons of ideas but not the foggiest idea how to effectively incorporate everything. Thus, the picture is unfocused and muddy, confused and confusing, and since most of the zombie film elements found here have been seen dozens of other places, it doesn’t make this stand out as much of anything but a bit of a mess.

So, lemme get this straight…we got aliens now too?

By and large, Undead has a comedic feel to it that makes it somewhat comparable to the early, hideously gory early films of Peter Jackson, though the Spierigs aren’t nearly as inventive as Jackson – or as clever as they think they are. (It’s worth noting that Undead has been accused of being a ripoff of the British comedy/horror film Shaun of the Dead – impossible given that the Australian film was made a year earlier.) Much of the comedy present in the film feels a bit forced and obvious – the best bits occur when the directors don’t draw attention to the fact that they’re attempting a gag, but honestly, this film is nowhere near as amusing as it really should be. I also grew tired of the “look at me” moments going on here, particularly those that featured Marion – this rather rotund guy (who never quite convinced me that he wasn’t some sort of ) is constantly pulling off Matrix-style, slow-motion parkour moves, hurling his body into ridiculous positions in order to get a clear shot at marching undead, at which point he unloads an absurd amount of lead in the direction of the brain-munchers. This despite the fact that he urges others to “save their bullets.” The overload of pointlessly flashy camerawork and over-use of slow-motion quickly gets to be too much: I could almost imagine during some sequences that the directors were having a sexual climax behind the scenes as they watched their opus of bloodletting play out. Ultimately, the hopelessly unrestrained Undead is only slightly (very slightly) less downright annoying to watch than director Uwe Boll’s hilariously obnoxious House of the Dead from the same year.

Marion, the ticked off Amish fisherman. With guns.

Complicating matters further is the cast itself: Felicity Mason as Rene seems almost catatonic at times and seems to think that acting mainly involves her opening her eyes really wide. I just couldn’t buy her as the heroine character at any point, and Mungo McKay as Marion is only marginally more tolerable. McKay is built up to be the gruff-voiced, super-cool, super-slick hero from the moment he first appears onscreen, providing cryptic answers to any questions that are asked of him. Eventually he, like all the other characters here, becomes stale and uninteresting, and I think overall, the cast simply goes as overboard with their acting as the manic writer/directors did with their visuals and technique. In terms of the expected zombie action and gore, the picture has its moments and occasionally is positively splatterific, offering up a mixture of CGI and practical effects work. On the downside, this film was produced at a time when many things were theoretically possible through the use of digital effects, but the effects themselves don’t really hold up that well – especially compared to what would be seen today (the “giant wall” that descends over the town in particularly unconvincing). Many films of the ‘90s and early 2000s suffer from this same problem; it’s almost inevitable when looking at older films to spot technical imperfections, but I personally find obvious and lousy digital effects to be borderline unwatchable.

Compared with the best, undeniably distinctive Aussie genre films (a number of which are among my absolute favorites), Undead not only seems too formulaic and familiar, but it’s also downright ugly. This film is overwhelmed by not only darkness, but also a color scheme dominated by dull browns and grays: I really think some color (and not just floods of goopy gore) would have gone a long way in making the picture more lively. Also, is it just me or does Cliff Bradley’s main musical theme sound a little too much like the “Promenade” from John Williams’ Jaws soundtrack? All things considered, Undead may be energetic but it’s not especially fun – strange, given the amount of truly wacky elements thrown into the script. The Spierigs may be talented and imaginative, but they don’t demonstrate much control over this production. Frankly, this film is rather sloppy, with a few too many false endings; I’m not especially surprised that the brothers haven’t done a whole lot since its release. Even if Undead may appease zombie film fanatics on some level, most viewers would be best served by (re-)watching the much more satisfying Shaun of the Dead.

DO THE ZOMBIE SHUFFLE!

From Lions Gate and in widescreen format, the DVD includes a nice array of bonus features including two commentaries (one with the cast, one with the crew), a selection of deleted and extended scenes and digital effects comparison footage, as well as a handful of making-of type featurettes. All in all, it’s a package that speaks to the fact that this film was a step above the typical (i.e. even worse) low-budget Lions Gate horror release.

8/10 : Gunfire and destruction galore, with lots of goopy bodily fluid and spilling innards. That said, this film isn’t scary in the least.

8/10 : One character in the film seems to use the f-bomb in place of every other word, hence, there’s a lot of profanity here.

1/10 : A gratuitous stripping scene in which the characters try to avoid the literal acid rain. Doesn’t make sense to me either, but there’s no nudity.

6/10 : A lesser zombie film to be sure, though I’m sure someone out there would find this more enjoyable than I.

“Aunt Aggie has the keys…but she doesn’t have a brain!”