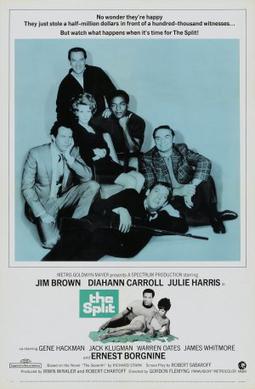 “Paranoia, paranoia; everybody’s coming to get me…”

All that said, The Split does have a few memorable moments and noteworthy sequences while offering up the usual assortment of action scenes including a couple of shootouts (one rather nifty scene playing out in a hall of mirrors), a car chase between a speeding limo and a sports car, and a few fight scenes. Especially cool is a scene in which McClain is assaulted in an absolutely immaculate sauna – the juxtaposition of brutality and grandeur in this scene is striking. It’s also worth noting that there are several glimpses of an actual 1967 pro football game between the LA Rams and the Atlanta Falcons which make one appreciate how far the NFL has come in the last fifty years or so. Director of photography Burnett Guffey attempts to make up for Flemyng’s lack of confidence by throwing in some nice-looking individual shots, including some breathtaking panoramic views of the California landscape and a mesmerizing orange-drenched sunset. I also really liked a key image showing a sheet covering a dead body gradually turning red as it absorbs blood leaking from the corpse underneath – a well-designed, well-executed visual. Finally, the editing scheme of this movie (which was initially rather lackadaisical) kicks into high gear during the final act, ensuring that the picture ends on a high note even if it’s kind of sloppy in getting to that point.

A few sequences here really stand out in the middle of all the mediocrity.

Considering the cast assembled for this film, what’s most shocking about The Split is that it quite simply is nowhere near as captivating or compelling as it should have been, hampered by a script that takes a long time to get going and doesn’t have enough really good ideas in it. If a viewer can stick through the slow-going first half, the film delivers a good amount of suspense while building towards its slam-bang climax, but nothing here is enough to make the film into something truly special. Honestly, The Split (which boasts a neat and funky music score from Quincy Jones) isn’t terrible and it probably would hold most viewers’ interests, but the most noteworthy thing about it in the bigger picture of cinema is that this was the first picture handed an R-rating by the MPAA (though it would probably be classified a PG-13 by today’s standards). Decent but completely unremarkable, I’d call this a film that would be most ideal for viewing on a rainy afternoon: not something that’s really worth seeking out, but by no means a complete waste either.

As part of Warner Brothers’ Archive Collection, this film is presented in widescreen format with no extras.

5/10 : Some gun violence, associated death, and just a bit of gore

4/10 : Rather minimal profanity, but the film does have some racially sensitive dialogue during a few stretches

2/10 : Implied sexual encounters and fleeting partial nudity – nothing much.

4/10 : I would have hoped for more considering that unbelievable cast.

An all-too-telling line that sums up the film: “You’re not forgetting the money, are you?”