WHEN LINDSAY LOHAN’S BARE BOOBS ARE NOT ENOUGH: THE BLEAK, FRUSTRATING THE CANYONS 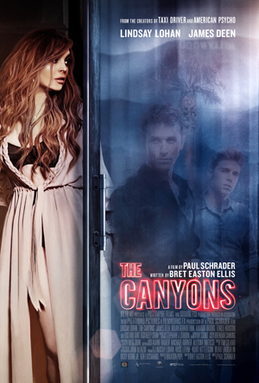 Pros: The social commentary is interesting for awhile

Trading in much the same currency as some of writer Bret Easton Ellis’ previous stories (perhaps most notably American Psycho), director Paul Schrader’s The Canyons, produced on a shoestring budget in 2013, has been championed in some circles and trashed in others. Looking at the film, it’s not very hard to see why there was this disparity among critics. On one hand, it’s fairly well-made and certainly holds a viewer’s attention, but on the other, it’s a bleak and ugly film dealing with despicable characters that’s ridiculously profane and obnoxious, boasting acting that’s sketchy at best. At one point during the film, I was toying with the notion that this film (intended to be a sort of noirish thriller according to writer Ellis) may be one of the most perfect representations of the decline of American civilization ever put to celluloid since it seems to take place in a cultural nightmare populated by completely unlikable, oblivious and self-centered characters. As the film unfolds however, it becomes increasingly difficult to take anything here that seriously – I might have expected better from Schrader, the writer of Taxi Driver, but considering Schrader’s up-and-down career as a director, maybe I shouldn’t be surprised that The Canyons winds up being another vaguely interesting failure.

James Deen and Lindsay Lohan as Christian and Tara – what else? – playing on their phones.

After a terrific opening montage of abandoned Hollywood movie theaters that expertly creates a incredibly dismal mood, the film begins by introducing the four main characters during a sort of double dinner date at a posh restaurant. First, we have Christian and Tara, who’ve been together for about a year. Christian is an independently wealthy trust fund baby living in the Hollywood Hills who finances films but basically seems to do nothing all day except enjoy the extravagances his fortune has afforded – namely Tara, who seems to do even less than her boyfriend yet like him, can’t seem to find any semblance of satisfaction despite her luxurious standard of living. Opposite these two are Ryan and Gina, a more “down to earth” couple also involved in the film business: Ryan has been cast in Christian’s new movie, though he’s more or less struggling to afford life in Los Angeles. Right off the bat, there’s a tension between these two couples that only becomes more apparent as time goes on: essentially, Tara and Ryan were once lovers, and have recently been hooking up on the side. Meanwhile, Christian (in between involving himself and Tara in casual sex with strangers) is still fooling around with his ex named Cynthia while trying to figure out why Tara is “acting weird” lately. Mainly, this involves having a mysterious stalker follow both his girlfriend and Ryan around to try and find out what they’re doing. Needless to say, all the paranoia and double-crossing eventually starts to cause fractures in the relationships between these characters, leading the stuck-up Christian further down a path to complete insanity.

Though the film is very “sexual,” it’s hardly “sexy.”

As that description may suggest, the storyline Ellis has concocted for this film is, in the words of the characters themselves, complicated – not so much in that it’s difficult for a viewer to keep tabs on the situation, but rather because every character here has their own mess going on trying to sneak around behind the backs of the others. Even if the situation in the story becomes increasingly preposterous and ridiculous as it goes along to the point that none of it seems believable, the ultimate sad and/or disturbing thing about this film is that I’m not sure that I could honestly say that the film is completely inauthentic or unrealistic. It seems that in today’s day and age, shenanigans like those depicted in this film do go on in the lives of young people, which explains why many modern relationships seem almost doomed to fail. Though I’m not sure that it was intended that way, Ellis’ script does seem to illustrate and propose some reasons for this situation, becoming a sort of commentary on the notion of privilege (all too relevant in the wake of recent news events – note the remark “Nobody has a private life anymore…”) and the (sad?) state of American culture.

Tara preparing for a night of casual sex with strangers.

For instance, all these characters seem almost addicted to their cell phones in particular and technology in general, using text messages to handle situations that probably would be best dealt with in person (though the reliance on text messages to further the story seemed cheap to me, this absolutely is how some people operate today). To me, this behavior is a major factor in modern people’s tendency to screw around on loved ones – some people these days just don’t take other people’s concerns into account when they are deciding what to do, and it seems to me that fact that we no longer have to deal with people on a face to face basis or have to handle the real repercussions of various actions has something to do with that. It’s worth mentioning that none of the characters populating this film have anything to complain about in the grander scheme of human existence – they live in luxury and have few worries. The problems they’re dealing with are exclusively brought upon themselves – and frankly, they’re appalling as human beings.

Read into this what you will…

Despite the fact that The Canyons is precise in its depiction of the supposed bankruptcy of modern American culture (or maybe I’m just reading into everything too much), as a whole the film simply isn’t good enough for me to buy into its arguments. Schrader and Ellis eventually can the social commentary in favor of pure sensationalism: Ryan having to engage in homosexual sex in order to further his acting career, Cynthia having a heart to heart with Tara about the time Christian drugged and “ran a train” on her, a trippy sexual free-for-all between two couples. It really just seems like Ellis lost all focus with his script at a certain point and decided to make something outrageous. In the end, the script seems downright lazy with awful dialogue and ridiculous situations replacing a genuine sense that the story was trying to point out how absurd modern life has become.

Throughout the film, Lohan sounds like a three pack a day smoker due to her hoarse voice. She obviously ain’t a Disney kid anymore…

Acting in the film from a undeniably bizarre cast of actors adds to the problems. Much was made about Schrader’s casting of Lindsay Lohan and the various problems that occurred on the set of this film. Onscreen, Lohan does a decent job of portraying Tara, a character that doesn’t seem too far removed from her real-life person in that she thrives on and/or creates “drama.” Tara has a tendency to start weeping whenever things “get real” which I’m not quite sure entirely works, but Lohan nonetheless has a few poignant moments of emotionality. Porn actor James Deen (real name Brian Matthew Sevilla) stars as Christian and seems overly mechanical; his line delivery during key moments of the film ruins any of the escalating tension, taking away from the effectiveness of the story. I also found that this character was too reliant on stereotype and cliché, particularly with regard to how the story finishes. Nolan Gerard Funk fares little better than Deen as Ryan: like Deen, Funk is never quite able to hit the right mark in his performance. In smaller roles, a rather forgettable Amanda Brooks plays Ryan’s girlfriend Gina but doesn’t have much to do and Tenille Houston looks great naked and that’s about it. Worth note: director Gus Van Sant appears briefly as Christian’s psychiatrist.

Yes, Lohan’s breasts are prominently on display several times, but those coming into this film strictly for the nudity will no doubt be disappointed.

When all is said and done, The Canyons winds up being an ugly movie, but I think (or should I say hope) that was the point. I guess one can’t expect a miracle from a movie made for $250,000, but as mentioned, I would have expected something better from this writer and director team (this stands along with David Lynch’s as being one of the most baffling, semi-tasteless things I’ve ever seen coming from a former A-list director). On the plus side, The Canyons is well-photographed by John DeFazio, resembling a much more expensive film that it is, and I thought the almost sickly look to some sequences in the film were very appropriate given the story. Brendan Canning (of indie rock band Broken Social Scene) created the pensive instrumental soundtrack of synthpop music and despite the fact that I might compare The Canyons favorably in terms of its look and feel to something director Larry Clark (who made Kids, Bully, Ken Park etc.) might have made, there’s a sort of bleak surrealism to the picture which adds to the downtrodden mood. It’s kind of shame this film didn’t turn out better than it did: it really does have some interesting subtext to it. Unfortunately, the writer and director seem to drop the commentary at a certain point, delivering an unaffecting film that finally goes full bore into a passe ending that seems particularly lame in the context of this supposedly “edgy” indie production. By no means is The Canyons as awful as some have made it out to be, but it is difficult not to be at least partially disappointed by the final project.

4/10 : Though there’s only a single gory crime scene and brief bit of violence, this movie is rather intense and extremely ugly.

7/10 : A polarizing film, though I don’t think anyone would confuse this with a masterpiece. It’s likely that a viewer would either tolerate and maybe even appreciate it on a certain level – or completely hate it.