“THAT WAS JUST AN APPETIZER…NOW FOR THE MEAL…” PROWL

Cons: Photography is awful; script is dumb; film is pointless

Though I’ve been a long-time fan of horror movies (thank you, USA’s “Up All Night!”), I’ve made a conscious effort to avoid many of the so-called horror films being produced in recent years primarily due to the fact that so many of them seem not only worthless but completely pathetic. While the genre as a whole seems to be thriving (at least in terms of the number of films being produced), I can’t help but wonder just what today’s horror fans see in some of these films: even if I grew to enjoy awful B-movies of yesteryear, surely those films can’t be any worse than the likes of something like the 2010 effort Prowl. Here’s a film that has so little originality to it that it genuinely borders on being comical: I’ve often pointed out that modern horror films act as my comedies since it’s so difficult to take any of them seriously, but Prowl is so formulaic and predictable as to defy belief and inspire me to chuckle. It’s also stunning how little technical ability the filmmakers who made this film appear to have: as cinema, Prowl is abysmal and seems like a monumental waste of resources and effort. 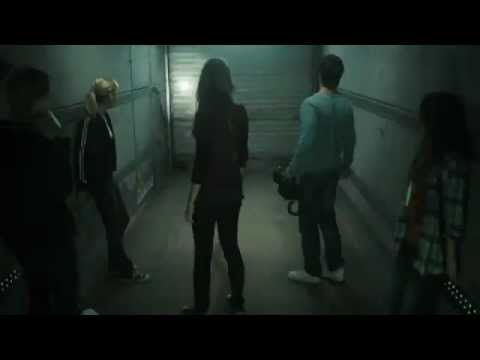 The notion of being trapped in the back of a semi-trailer is more genuinely scary than anything else in the film.

The film deals with a group of small-town young people struggling to deal with cliched “big people problems” who wind up attempting to travel to the big city primarily so that one girl named Amber can finally escape her small town ennui. The trip doesn’t go so well however: just outside their hometown, the van they’re riding in breaks down, leading them to accept a ride from the prototypical shady truck driver who allows them to ride in the trailer he’s towing. Because that sounds like a good idea. In any case, lo and behold, the young people wind up trapped in a decrepit, abandoned slaughterhouse that’s populated by a group of vampire-like ghouls with superhuman powers that pick them off one by one while “learning how to hunt.” Ultimately, it’s left to Amber to try and escape from the facility in one piece – but watch out for that ultra-lame “surprise” ending that puts a new spin on the whole film…or not.

Menacing as these creatures look, the film’s suspense is minimized by terrible editing and photography.

Part of Liongate’s After Dark Films lineup, Prowl is not only hopelessly inept in the way its made, but remarkably unexciting. Tim Tori’s script is virtually a checklist of cliches: our main character Amber is a fatherless child who is forced to look after her alcoholic mother. Just when I was starting to get over the groan-inducing familiarity of Amber’s situation, her mother drops the bombshell that the young woman was adopted: as if this script could get any more painfully stereotypical. And then there’s the pot-smoking, hard-partying “rebellious” youths that Amber hangs out with: I’m honestly not sure this film could have invented less compelling characterizations if it tried. Once the horror movie plotline begins, Tori’s script doesn’t fare much better, with the film coming across as a sort pursuit thriller punctuated by occasional, tiresome jump scares. In a lot of ways, Prowl is reminiscent of a zombie film in the 28 Days Later mold since Amber is pursued by groups of spastic monsters with pitch-black eyes, but in the hands of director Patrik Syversen and cinematographer Håvard André Byrkjeland, this film is utterly disastrous.

Seeming to be tailor-made for the ADHD generation, Prowl mismanages its sense of space and time to the point where not much of anything in this film makes one lick of sense. In addition to repeated flashback sequences thrown in for no apparent reason, the film’s editing scheme is mangled to the point where I had no clue what the hell was happening much of the time. Jump edits have taken what I imagine was once a somewhat steady story and made it positively confusing and fractured, but the situation is made ten times worse by a cinematographer who seems to believe that every scene here must be filmed with shaky-cam that suggests the viewer is running along like a drunkard right behind or beside the main characters. This not only makes it extremely difficult to get a grip on the circumstances occurring in the story and the locations they’re taking place in, thus ruining much of the so-called “suspense,” but also makes the film incredibly annoying and downright irritating to watch. At some point, a director has to say enough is enough and simply present a straight-forward presentation of what’s happening at any given time. This film goes way overboard with moronic and pointless camera acrobatics that render each and every scene not only disorienting but wholly incoherent and borderline unwatchable.

A group of sex-crazed morons trapped in a life-or-death situation? Surprisingly, this isn’t as fun as one might think.

Meanwhile, the actors in the film bring little to the table themselves. Courtney Hope as Amber drops the ball during the more dramatic scenes (though the script may be at fault for some of this – do we really need the frustrating “It’s all my fault!” moment?), but also simply isn’t compelling enough onscreen to give the story any sense of urgency. The supporting cast here is largely forgettable as well: all the young people come across as unlikable, sex and drug-fueled buffoons, and the villainous characters simply aren’t in the film enough to matter. Saxon Trainor is the sort of mother figure to the vampire-creatures and probably is the closest this film gets to having a definable villain, yet she only has about two scenes in the entire film so her role in the bigger scheme of the story is negligible. Bruce Payne, as the ultra-shady truck driver who gives the kids a lift in the first place, has a quietly sinister air about him, but is similarly underutilized. I was left wishing that Payne played a more significant role in a film that desperately needs more genuine creepiness.

Too many scenes like this set up the obligatory “jump scares” well in advance. Everything in the film is very familar.

Per usual in modern horror, there’s a decent amount of gore to be found here, including severed limbs and heads galore and lots of black, goopy blood being thrown around the set and drenching the main characters. All this splatter doesn’t much to help a film that’s technically awful and frequently dull. It honestly boggles the mind to think that anyone would consider this to be an effective way to tell a story: this film is a absolute mess and plays like the director just arbitrarily threw half the pages of the script out the window during the shoot. Or maybe Norwegian director Syverson just didn’t speak English: that might explain why this film turned out like it did. In any case, though I thought the sound design (which provides a mixture of insect-like rattling, high-pitched shrieks, and sometimes ponderous music) was pretty nifty, I can’t think of a single reason why anyone would want to sit through this dark, dreary, and clinically dumb flick. Even at just 80 minutes long, Prowl is a complete waste of time. 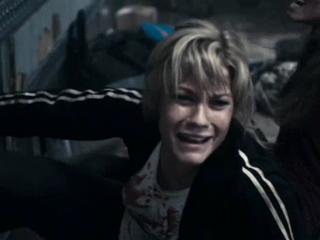 That’s how I feel as well…

Part of the “After Dark Originals” line, the widescreen DVD from Lionsgate includes a making-of featurette and a commentary with the director, writer, and two of the actors.

7/10 : Plenty goopy and gory, but none of this really seems to matter

2/10 : Sex-crazed young people fooling around and a few sexual references

4/10 : This is simply a lousy supposed horror effort through and through, though I suppose someone out there will believe that this film “rules”

Trailer, WARNING! Not Suitable for Work: