“THE DEVIL RIDES WITH YOU…” SABATA

Pros: Lee Van Cleef; some decent action down the stretch

Cons: Villains aren’t particularly threatening at any point; feels small-scale when compared to the best Italo-westerns

A few years after Italian producer Alberto Grimaldi and director Sergio Leone had wrapped up the so-called “Dollars Trilogy” with 1966’s magnificent The Good, the Bad, and the Ugly, Grimaldi attempted to replicate the success of Leone’s trilogy with another one revolving around a pretty familiar western anti-hero. 1969’s Sabata deals with the titular character who initially seems to be a sort of avenger figure who becomes involved in a bank robbery plot in a small Texas town. After returning the safe containing $100,000 that was stolen in the heist, the cool and collected Sabata seems content to accept a $5000 reward for his heroic actions, but it quickly becomes apparent that he’s a little less cut and dry of a hero than that when he blackmails the town officials responsible for the robbery for an ever-increasing amount of money. This, of course, doesn’t sit well with these folks who have no intention of paying Sabata off; instead, the crooked banker who devised the robbery in the first place seeks to hire various assassins to dispose of Sabata. As is typically the case in Spaghetti Westerns, this is easier said than done. Even as he’s dealing with the assassins, Sabata (with help from a somewhat buffoonish Civil War vet and an acrobatic mute) works up his own plan to eliminate the despicable town officials once and for all – but what role will a mysterious gunfighter known only as “Banjo” play in the unfolding action and more importantly, whose side will he end up on?

Sabata enforcing his authority over his companions.

Written by Renato Izzo and Gianfranco Parolini (who also directed), Sabata provides exactly what one would expect from an Italian western of this era. The cunning main character finds himself in a variety of potentially hairy situations, yet manages to find a way out of the danger by using his cleverness and skills as a gunfighter. Considering that this same type of story had been done time and again around this period in which literally hundreds of Italian westerns flooded cinemas, I might have expected Parolini’s film to provide something a little outside the norm to really hook a viewer. Sadly that doesn’t seem to be the case: while a director like Sergio Corbucci was able to give life to his 1966 Django by overloading the film with violent action and also make the extremely bleak 1968 film The Great Silence one of the most outstanding Italian westerns ever made through use of a great gimmick (namely, the fact that the master gunfighter main character couldn’t speak), Parolini mostly seems to have been going through the motions making Sabata.

Though the film is appropriately gritty and features a windblown setting that appears genuinely desperate, for the most part, Sabata seems uninspired: Parolini (working with cinematographer Sandro Mancori) does manage to create some visual interest by focusing on idiosyncratic details, but his scene composition is more often cluttered and clumsy. There’s no sense of purpose to many of his shots, and Sabata plays almost as the antithesis of a Leone western in this regard. The color scheme is also very drab, dominated by grays and browns – this fits the mood and tone of the story but doesn’t make the picture any more eye-catching to watch. By the time the big slam-bang finale turns up, I was mostly disinterested in a film that simply didn’t offer much to distinguish itself from dozens of obviously similar pictures and stories, and any amount of pyrotechnics and gunfire during the final ten minutes can’t really make up for the mostly forgettable hour and a half that preceded it.

I appreciated the level of detail in the film, but it’s nowhere near as polished as Spaghettis directed by Leone or Corbucci.

The most damning thing about the film in my opinion is the fact that the villains here simply don’t seem all that threatening. A rancher named Stengel is the obvious main bad guy, but as portrayed by Franco Ressel, he comes across as an incredibly meek banker-type who has a condescending view on the rest of humanity (we’re not-so-subtly introduced to the character while he’s reading a book entitled Inequality is the Basis of Society so his motivations are in plain sight right out of the gate). This guy doesn’t seem capable of doing much except talking somebody to death through use of holier-than-thou rhetoric, and his partners in crime (namely a rotund tavern owner and sheepish judge) are equally as ineffectual. The more rough-and-tumble western villains who actually performed the robbery are taken out of the picture early on in the story, meaning that the script has to introduce a series of basically throw-away potential assassins who try and gun Sabata down throughout the film. These skirmishes are fleeting and almost irrelevant: there’s no sense of surprise or tension here, and Sabata’s inevitable conflict with Banjo (played capably by William Berger, who looks ridiculous sporting what seems to be a moppy red-haired wig) doesn’t do much to alleviate the sensation that this film needs a more obvious and aggressive villain character. 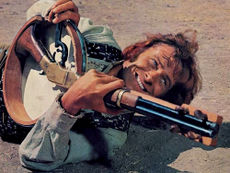 On the plus side, having the inimitable Lee Van Cleef as your main character means that it’s hard for a viewer to lose interest in Sabata even if the film as a whole isn’t all that compelling or unique. Van Cleef is simply magnetic as he scowls, snarls, chuckles dementedly, and barks out lines with pronounced intensity, and since most viewers probably would have previously seen him play some of the most nefarious villains in western film history, it’s very easy to buy into his Sabata as an anti-hero. Ultimately, Van Cleef’s performance is the one reason why this film would be honestly recommendable to fans of the genre (his interactions with Berger’s “Banjo” character are particularly good), but I actually enjoyed the supporting work provided by Italian actor Ignazio Spalla as Sabata’s main sidekick quite a bit as well. Spalla is a big, burly, grubby-looking fellow: the perfect character actor to cast in a western, and his jovial, slightly goofy behavior throughout the film provides a nice contrast to Van Cleef’s no-nonsense attitude. Aldo Canti, meanwhile, appears in an almost slapstick sort of role as a mute Amer-Indian who is able to perform amusingly outrageous acrobatic maneuvers. I found this character somewhat distracting, though it does add some additional humorous material to the film.

In the midst of all the familiar and predictable elements, Sabata has a few standout moments, including a scene in which Banjo faces off in the middle of town against a quintet of gunmen and one in which Sabata visits a priest who has instructions to kill him – Banjo providing a “requiem” at the close of the scene is one of a handful of intriguing, more quirky moments to be found but I wish there was more of them. Marcello Giombini’s music was appropriately rousing, with a catchy main theme that features peppy guitar work and Morricone-like vocal choir, but though the music and editing adds suspense and vitality to certain scenes, the main body of the film is in serious need of a pick-me-up. In the end, I’d probably consider Sabata to be a quietly comical but relatively small-scale film that fans of Van Cleef would enjoy, but may not be all that exciting for fans of the western genre in general despite its definitive “A-HA!” finale. It’s kind of strange to me (though perhaps unsurprising given the tendency for Italians to overdo it in terms of movie sequels, hence the dozens and dozens of “sequels” to Django), that this generally unremarkable original film led to two subsequent Sabata pictures; though this first film is fine as a time-waster, I don’t think it’s much of anything special.

Neither the widescreen format from 20th Century Fox nor the from Kino Lorber have any special features to speak of. Personally, I’d go for the trilogy to get more bang for your buck, but picture and sound quality are better on the Kino release.

4/10 : The expected western gun violence and a smattering of blood.

2/10 : A handful of risque scenes taking place in a brothel, with implied sexual encounters and fleeting topless nudity.

5/10 : A fairly typical Italo-western that’s neither exciting or quirky enough to truly stand out from the crowd.

“I like living at the peak of excitement, for life is only worthwhile when you can face death without showing any fear. In fact, I enjoy it.”