“THERE’S SOMETHING DOWN HERE WITH US!” MONSTERS UNDERGROUND

Satisfying a niche (???) for shows about monsters lurking in caverns and abandoned tunnels, the second of three new monster programs on the Destination America channel premiered September 4, 2014 on flagship network Discovery. Another Mountain Monsters clone, this one following the exploits of cryptozoologist Bill Brock and the usual monster hunt team (a grizzled tracker named McGhee, a “scientist” named Casey who actually is a former physician and not any sort of researcher, and a character identified as “the beast” named Jeremy who is the ex-military, self-proclaimed “badass”), Monsters Underground tweaks the typical crypto-reality show a bit and may actually be one of the more creepy of the lot, having a more spooky atmosphere to it than any combination of Mountain Monsters, Swamp Monsters, Beasts of the Bayou, or even Finding Bigfoot episodes. Needless to say, as a scientific examination of unknown animals, Monsters Underground fares as poorly as the rest of those programs, providing scant evidence of any of the beasts Brock and his crew supposedly and inexplicably come into contact with.

Know what’s going on here? Neither do I, but I’m pretty sure there hain’t no monsters being found.

In the first episode of the series, Brock and company wind up in Arizona’s Volcano Cavern on the search for a large bat-like creature known as the (this despite the creature hailing from Africa). After briefly consulting a single eyewitness, the team heads more than 200 feet underground and comes into contact with a blob that shows up on the FLIR infrared camera. What this blob is is anyone’s guess, but of course the team immediately assumes it’s the creature they originally intended to find in the cave in the first place. Though I have to say the episode does a nice job of building tension as an unknown creature apparently stalks the team members in a deep, dark underground hole, I’m not all that convinced that the depiction of events in the narrative of the program is accurate.

A second episode saw the team in an area of Northern California known as Graveyard Gulch searching for an animal that apparently has been killing the local black bear population. This creature, called the and supposedly related to the now-extinct giant sloth, has to be one of the most ridiculous creatures any crypto show has ever sought out. As depicted in computer rendering here, the beast has a single large eye in the center of its head and a toothy mouth situated in the middle of its abdomen. Yeah…because that’s definitely real. At any rate, the team again finds itself in a staredown of sorts with an unknown creature that may or may not actually be real (I’m favoring the second of those options), and again, escapes with nary a single bit of hard evidence proving the creature’s existence. Or should I say, Brock claims he procures a DNA sample on a net coated in adhesive, but since the results of that analysis aren’t provided, I’m calling BS on the whole evidence/science thing.

Perhaps the best thing about Monsters Underground overall is that episodes of the show only run a half hour. Cutting the typical monster hunt show down by fifty percent means that Monsters Underground at the very least doesn’t waste time with town hall meetings, obligatory “let’s make fun of Wild Bill” moments, or “find the most sketchy witness possible” segments. Brock and his team cut to the chase: by the time these episodes reached their first commercial break, the monster hunt is solidly underway. The downside of this is that the creatures featured (on these first two episodes at least) positively seemed like figments of the imagination since there was only the briefest of discussions about past reports of the creature, their habits, and appearance. Though the program is tightly edited and fairly suspenseful, with ghostly music and sound effects applied at key moments, there’s no escaping the fact that the whole monster aspect to the show seems like absolute fantasy.

Sadly, this is precisely what these guys seem to be doing throughout the whole episode: sitting around, shining their flashlight at nothing in particular.

As much as I could proclaim that the crew in this show is probably putting themselves in the most obvious danger of any monster crew on television since they appear to be spelunking with minimal safety gear in some rather hazardous cavern systems, quite frankly there’s no way these situations are as hairy as the editing and commentary from the team members would suggest. If things were really that bad, there would be no way at least one camera crew would be able to document the team’s every move. That said, it’s difficult to fake some of the very real perils faced while traipsing about in relatively unknown subterranean caves: during the second episode for instance, gung-ho Jeremy dislocates his finger in about as gruesome a manner as possible and later has to painfully reset the joint. I’m not sure I can get behind Jeremy’s “kill first, ask questions later” approach, but the guy is a tough dude not only to remain calm looking at one finger that’s at a right angle compared to the rest, but also to put said finger back in place later on. 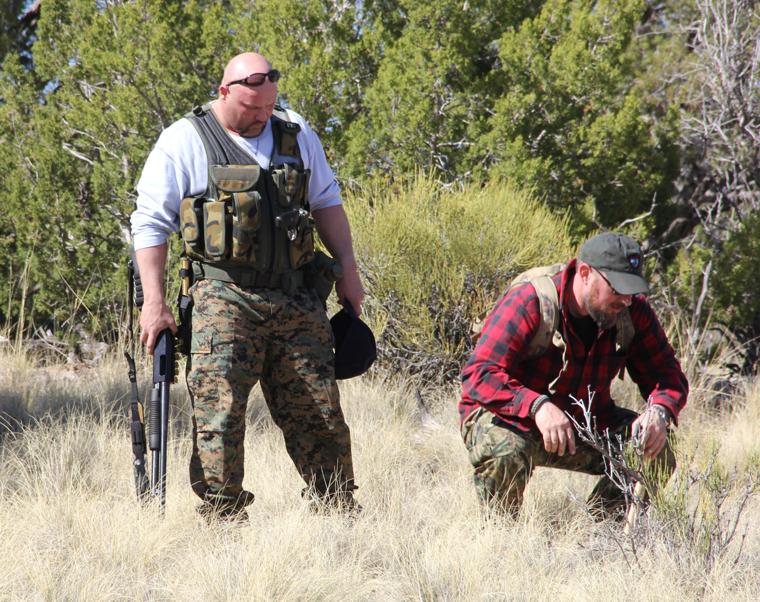 At least this gang has their priorities straight, the shotgun being a key part of any spelunking expedition.

While the program may be acceptably entertaining as a sort of adventure show, the introduction of monsters into the mix seems extremely gimmicky in context. Nowadays, it almost seems that the “monster card” is being added into standard-formula reality TV programs that otherwise would have been tiresome – and utterly pathetic – to give them a little extra kick: both Monsters Underground and Swamp Monsters as well as the upcoming Alaska Monsters seem to be proof of this new trend (let’s not forget that multiple reality shows are set either in the bayou or in Alaska). In some regards, Underground Monsters doesn’t try and kid itself or its audience into really buying into the whole monster angle: this show is more about the spelunking than the honest-to-Pete search for any unknown creatures, but I then have to wonder why in the world anyone would really want to watch it? The show simply doesn’t seem to do much to win viewership for itself – though the monster hunt formula seems exhausted to begin with, the cast here is dull and doesn’t add any “zip” to the proceedings. And yes, as might be expected, the monster hunt itself is preposterous. Sure, this show is slickly edited and generally well-made, but I honestly wish reruns of the corny but straight-faced In Search Of…, Sightings, Arthur C. Clarke’s Mysterious World, or hell, even Unsolved Mysteries would turn up in place of some of these increasingly desperate new monster-related shows. It seems unbelievable considering my innate fascination with all things cryptozoological, but I’m positively sick of this phony monster/reality garbage.

Maybe these guys should just stick to coal mining…