MEGHAN TRAINOR’S ALL ABOUT THAT BASS ON THE TITLE EP

Pros: “All About That Bass” is pretty catchy whether I’d like to admit it or not; if you’re 14 years old and female, you’ll probably enjoy the EP

It speaks to the overwhelming power of big-time media corporations that I, having precisely no interest in modern pop music, would nonetheless be exposed to one of 2014’s biggest and most successful songs. Having an uplifting “girl power” type message about being true to and accepting yourself for who you are, singer and songwriter Meghan Trainor’s “All About That Bass,” which sounds like a ‘50s doo-wop song performed by a modern “diva” type singer, slowly but surely gained momentum in the pop charts over the latter part of the summer of 2014, eventually replacing Taylor Swift at the top of the charts in mid-September. I imagine it was a bit of a surprise to some that a basically unknown artist would replace a music powerhouse like Swift in the number one position, but this can’t be that shocking in the bigger history of pop music, especially given the cheerfully quirky nature of Trainor’s song.

What most people might not realize about Meghan Trainor is that her 2014 EP Title, which features “Bass” as its lead single, is not her first attempt at making a name for herself in the music biz: she actually has a trio of independently-released albums under her belt even though she’s only 20 years of age. After showing promise as a songwriter, Trainor attended songwriting workshops in Nashville, and eventually collaborated with producer Kevin Kadish to make “All About That Bass,” refusing offers to sell the song to other artists and choosing instead to release the song as a single of her own. Grooving along to a string bass line and lots of peppy percussion elements, “Bass” is nothing if not an infectious bit of pop music, but there’s not a whole lot of substance behind the glossy exterior and the song actually has been criticized for being aggressive towards what its lyrics refer to as “skinny bitches.” Numerous artists have successfully older song formulas for the modern age, but the real question is whether or not Trainor can prove she has continued relevance and longevity in a modern music industry that too often seems obsessed with whatever is newest and shiniest. 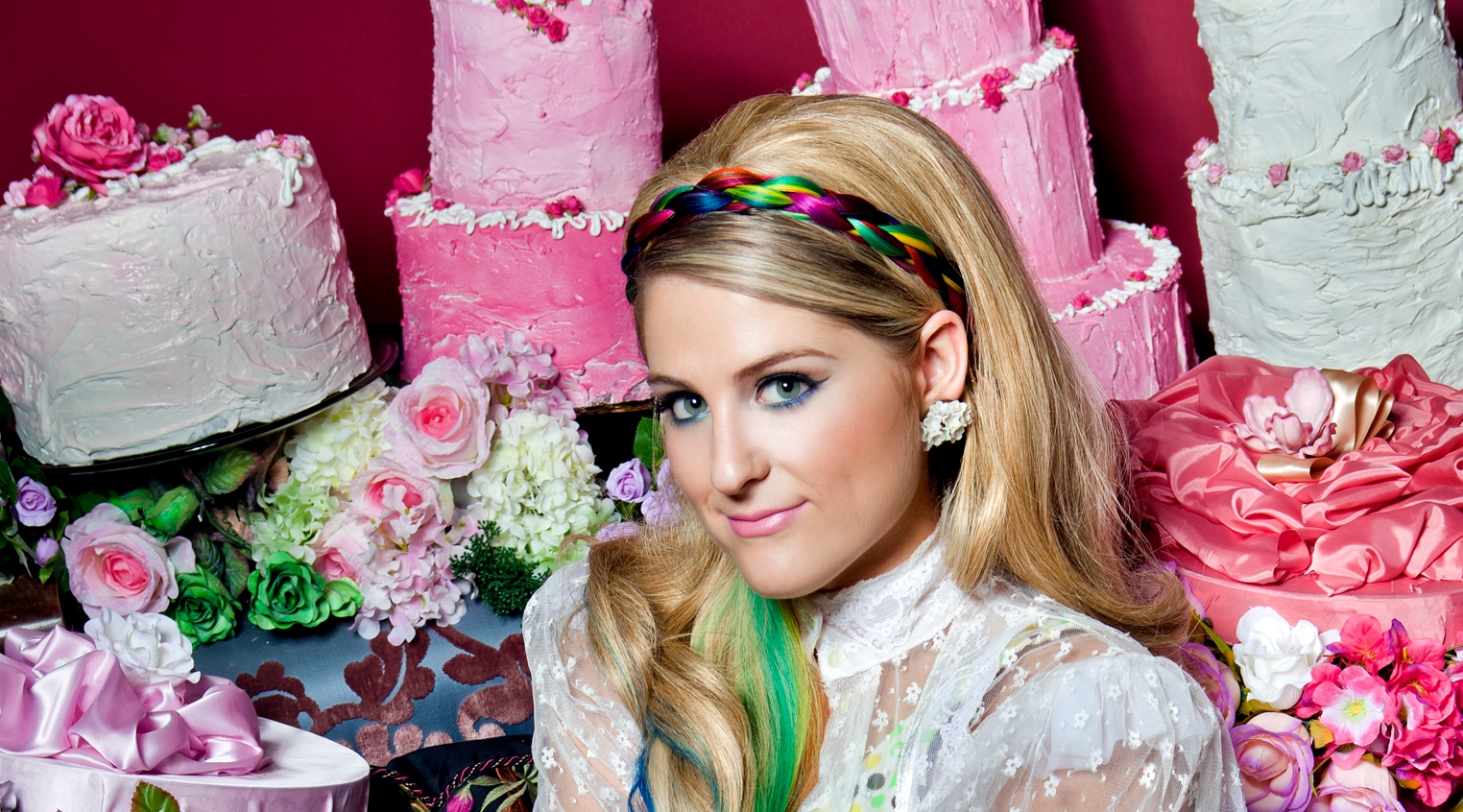 The temptation to come up with a “witty” caption for this pic is strong, but I’ll fight off the urge.

The cleverness featured in “Bass” figures in most every song on Title, all of which operate in much the same way, with Trainor seeming like a sort of modern soothsayer-meets-motivational speaker trying to improve the self-confidence of young women. At their best, these songs are cute and amusing with some playfully naughty themes, but at their worst they almost seem self-indulgent and a bit snotty, suggesting that Trainor knows all too well how these “witty” songs are likely to be consumed by the listening public. Built around a ukelele melody, hand claps and bassy, doo-wop male vocals, the album’s title track discusses Trainor’s desire to have a “title” in a romantic relationship, and not just be considered a “friend.” Though I like the baritone sax blasts that burp out during the chorus, the almost obligatory “real talk” interlude that plays out over dubstep-like electronic music is kinda iffy. On this song and all the others here, Trainor’s vocals sound bubbly and appealing – but also come across as almost mechanical. I probably don’t want to know how much production work and sound engineering went into the making of this album nor would I want to hear a stripped down, unpolished version of the song.

Third track “Dear Future Husband” (ironically??) borrows the repeating male vocal parts from Dion’s 1961 hit “Runaround Sue” and is another track that has Trainor speaking to a hypothetical male partner about the do’s and don’t’s of a relationship with her. By this point, the formula was getting tiresome to me, though I’m not exactly (or at all) the “target audience” for this release: hell, I’d expect most of the target listeners would not have a clue that elements from the track were lifted entirely from a song that’s five decades old. Album finale “Close Your Eyes” sounds a bit like an ‘50s slow-dancing tune, with lyrics that again attempt to empower the young female listeners out there. Obviously, the message Trainor is trying to get across throughout the album is a worthwhile one considering society’s focus on very limited concepts of female attractiveness, but I’m not sure that the overkill presented here is either the right or even an effective way to go about enacting a paradigm shift. One could almost be inclined to believe that the whole “message” would simply be a ploy to ensure more publicity and album sales.

Girl Power circa 1997 was a bit different…or was it?

Probably about the best thing I could say about Title is that it’s ideal for what it is – a spunky bit of bubblegum pop. I also have to point out that this album came out at just the right time to have some impact in the charts. Considering the focus in the past month on gender issues in modern society, a “girl power” album like this would hit the spot, and obviously did make quite a splash. Having said all that, this feels suspiciously to me like one-hit wonder material: I think Trainor does have talent as a pop songwriter (she’s already written tracks for country artist Rascal Flatts and Disney Channel singer/actress Sabrina Carpenter) and she definitely crafts some wonderful vocal parts in her songs, but I almost believe she’d need a lot more luck to make it as a solo artist. Frankly, it’s a tough go for pop musicians anymore: though a few “artists” (Katy Perry comes to mind) have immense success mostly due to massive record label push – and for having a body of the type Trainor seems to be speaking out against, many more flop either initially or eventually (the stat goes that for every major label artist that achieves massive success, ten are utter failures). Perhaps Meghan Trainor has a few more tricks up her sleeve following her initial smash success, but I wouldn’t be at all shocked if she essentially vanishes once the hype over “Bass” dies down. As for the Title EP, if you’re not a teenager any longer, I don’t see much of a reason why you’d need to own it.