Batman interferes with a capture mission involving the Riddler headed by Amanda Waller. He defeats her unit and then returns the Riddler back to Arkham Asylum. Determined to capture him, Amanda Waller recruits several captured villains forming herself the Suicide Squad to break into Arkham and find the Riddler. At the same time Batman is on his personal mission to find and disarm a bomb hidden somewhere by the Joker. -summary

Released in August 2014 as a direct to video feature, Batman: Assault on Arkham is a 76 minute movie taking place in the Batman: Arkham Asylum video game universe as it’s said to follow Arkham Origins, which was the last game released in 2013. At the same time, the storytelling in a way follows DC’s New 52 series Suicide Squad in total style and yes, even in its mediocre writing. I have not really enjoyed the Suicide Squad comic at all, therefore I did not come into this movie really expecting much. In fact, my major gripes with the comic are in full effect with this movie.

First of all I would like to address the misleading title. Although it’s labeled as a Batman movie he’s clearly a secondary character as the Suicide Squad take center stage, most notably the most recognizable character of the group being Deadshot and Joker sidekick Harley. Batman plays a part in some of the main plot but avoid this movie if he’s your only draw. I really didn’t care for this decision either; this is a mistake DC has made for years by not having any faith in their C-List characters to sell products. The Suicide Squad does have a solid following therefore DC should have went on ahead fully naming this movie after them. Personally, Batman not being featured prominently isn’t an issue for me. 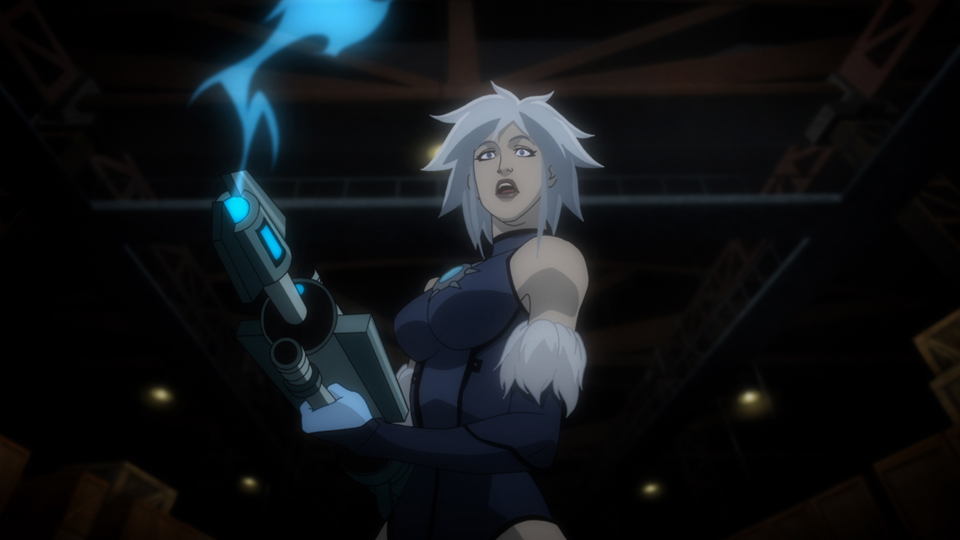 Assault on Arkham is an action movie completely at its core with a pretty good plot that is weakly executed. The Suicide Squad which is made up of Deadshot, Captain Boomerang, Black Spider, King Shark, Harley, and Killer Frost are blackmailed by Waller to invade Arkham. In order to get their cooperation, she had small bombs implanted into the back of their necks to instantly kill them if they attempt disobedience.  Their mission requires a sharp blanket of stealth which immediately goes out the window due to the Squad’s different personalities. The action segments are pretty fun and that’s mainly about it going on here. These types of movies are suppose to be packed with suspense and plot twist that enhances the viewing experience. Unfortunately everything couldn’t be anymore spelled out and predictable. This is probably about as barebones an action movie of this type can be. Even the interactions lack imagination and urgency. Killerfrost and Deadshot are two of my favorite below radar villains, yet I found myself not even caring about them; and Harley as of late has been a disease to me. I can’t stand the character at all and her so-called comedic moments never even so much as drew a chuckle from me.

Character development is very low here so don’t expect too much outside of these characters initial behavior and how they fight. The writing is pretty weak with some things happening at random and I can understand non fans of the comic not catching some of this stuff. However, as a fan of the comic, DC once again portrayed Amanda Waller as someone lacking in intelligence. Later on in the movie, it’s revealed that Waller wants the Riddler dead instead, and she tasks Killerfrost with this part of the mission. Amanda Waller is no fool, but she clearly comes off as one. She knows that the Riddler may easily be Batman’s most intelligent enemy, but she sends in Killerfrost who isn’t very bright. Why send in your least intelligent operative to silence the Riddler, whose mouth and intellect are his greatest weapons?  She could have chosen Black Spider or even Deadshot given the fact most villains don’t like the Riddler. I have more issues I can bring up with this including the ending but I’ll leave it alone. The animation is decent enough as there’s plenty of fisticuffs and even brutal onscreen killings. Batman’s battles are still very engaging though and there is plenty to rope in the action fiend. At least in this area I won’t dare say that I was ever bored. People new to these characters will get some idea on how they battle with Killer Frost being a high point here. It was great to hear Kevin Conroy voicing Batman again, but the overall voice acting was mainly hampered by poor dialog and stale interactions. The only high point here is the meeting between Batman and Amanda Waller voiced by CC Pounder; they didn’t exactly bring back the magic some of us witnessed during their clash in Justice League Unlimited, but they managed to put a small on my face. In regards to the soundtrack; I’m aware that Dubstep has its following but this form of music is quickly becoming poison to my ears. I hated the BGM and tried my best to block it out.

Batman: Assault on Arkham is difficult to recommend to adults. The silly and childish sexual references along with the forced unfunny comedy is something that will mainly appeal to teenage boys. This is one of those occasions where mature only means not for children. I suggest giving this a watch if you love the things I found to be a problem, or if you’re like me, and simply need to give all comic to animation adaptations a chance. There are plenty of bonus features such as 4 episodes pulled from Justice League Unlimited, Young Justice, Batman: Brave and the Bold, and The Batman. Plus a sneak peek on the next DC animated feature due out in 2015, Throne of Atlantis.