Pros: Consistently enjoyable, with a nice sense of pace, brisk editing, and plenty of surprises

In the middle of a pouring rainstorm, a man wearing a trench coat forces his way into a crowded, extremely posh restaurant. He spots a well-dressed woman sitting in the back of the hall, enjoying a meal with a male companion who seems to be enjoying her company more than the food itself. Without warning, the guy in the trench coat opens fire with a machine gun, blasting away diners and shattering huge aquariums along the walls, thus spilling all sorts of exotic fish and lobster across the marble floor. He turns towards the woman, his wife, and she begs for her life. His finger tenses on the trigger and she’s pushed back through a service corridor by the force of lead hitting her body. Suddenly the director yells cut.

This opening scene of the 1986 action flick F/X (also known under the perhaps more accurate title Murder by Illusion) serves to point out to the viewer that not much of anything can be taken at face value in a film that deals with a special effects artist (or illusionist if you like) who’s recruited by the Justice Department to fake the death of a prominent mob informant named Nicholas DeFranco. Agreeing to take the job, FX man Rollie Tyler devises various gimmicks to make it look like DeFranco is gunned down in a crowded restaurant, but immediately after the “fake” hit takes place, he finds out something is not at all right. Not only are the police convinced DeFranco died for real, but the feds are now trying to eliminate Tyler as well. While Tyler attempts to get to the bottom of the conspiracy he’s become involved with in an attempt to clear his name after his girlfriend is killed by government assassins, a hard-nosed police officer named Leo McCarthy (who hauled in DeFranco the first time around) is performing his own investigation into the matter, convinced there’s something suspicious about the feds who were overseeing DeFranco’s safety. As might be expected, all of these subplots collide in the end, but not before some serious twists and turns pop up along the way.

Even if its unlikely anyone would convince F/X with brilliant film making, there’s no denying that this film is, quite simply, highly entertaining and enjoyable. Capturing New York City in the all its 1980s glory and directed by Robert Mandel, who at the time was known for his theatrical direction, the film as a whole seems very workmanlike, but in a modern era where far too many directors go overboard with flashy visuals in an attempt to prove and showcase their “vision” (or to appeal to the ADHD generation), this almost seems like a revelation. Mandel’s straight-forward direction harkens back to the slick execution of action films like The French Connection that were noted for their sense of realism and matter-of-fact presentation. There aren’t all sorts of loud and obnoxious camera moves here; cinematographer Miroslav Ondricek just seems to have photographed the action in as competent a manner as possible. In the end, this allowed the director and editor Terry Rawlings to construct tight action sequences that really energize the film. No, F/X doesn’t come close to rivaling any of the Rambo, Chuck Norris, or Schwarzenegger films as being quintessential (literally overblown) mid-‘80s action cinema, but that doesn’t at all mean that it’s not extremely pleasing in its own way.

The film offers a peak behind the scenes at how movie special effects are made, which would have been interesting stuff in 1986.

Though I could say that the script by Gregory Fleeman and Robert T. Megginson (which plays like a mash-up of the whodunnit, police procedural, and slam-bang-boom genres) stretches credibility or believability at times, for the most part it come across as being not only compellingly quirky, but also fairly realistic and at least plausible. If nothing else, Fleeman and Megginson pepper the picture with a little bit of everything an action movie fan could want: we get a pedestrian chase in Central Park, an exciting and well-executed vehicular pursuit through crowded neighborhood streets, fistfights, gun battles, and even some stealthy spy movie action. Since the script largely deals with the efforts of a movie effects artist to trick his pursuers, we not only get a peak behind the curtain of how cinematic special effects are done, but also get some rather clever sequences making use of various props and gimmicks, particularly towards the end of the film. All the while the action is playing out, the script also unfolds its mystery in an intriguing manner. Despite the fact that I was able to predict some elements of the story, it does unleash a couple legitimate surprises once it gets going and I think most viewers would be sucked into the ongoing plot.

Bryan Brown as Tyler, taking matters into his own hands.

Bryan Brown appears in the film as Tyler, a smart-Alec with a mischievous streak that I’d expect a movie special effects man to have. I wasn’t completely convinced by Brown’s acting during the more dramatic scenes here, but his generally effective portrayal ensures that this guy is an improvement from the typically cardboard ‘80s action movie hero. Diane Verona is appealing in a smaller role playing Tyler’s ambitious actress girlfriend, while Cliff DeYoung (as the hotshot younger agent) and Mason Adams (playing the stuffy and shady chief) play the villainous government agents who recruit Tyler into the plot in the first place. I could almost say these two obvious bad guys weren’t quite interesting enough to carry the film on their own, but Jerry Orbach (playing the mob informant) is genuinely fun to watch playing the stereotype of a sleazy Mafia boss. By far the best acting in the film from my standpoint was provided by Brian Dennehy as the grizzled detective McCarthy. Dennehy only shows up around the halfway point of the film, but makes up for lost time by stomping like a madman through all of his scenes through the rest of the picture. His character really isn’t all that different from hundreds of other movie cops that have turned up in cinema over the years, but Dennehy attacks the role with intensity.

Look at that ‘stash! You just get the sense that Brian Dennehy as McCarthy ain’t gonna take no b.s. from anybody.

Building to a satisfying finale that’s not what I might have expected, it’s rather unfortunate that F/X isn’t remembered in the same way of other louder (and more stupid) ‘80s action flicks. This film probably won’t blow anyone away, and perhaps the comparatively low-key way in which it was constructed has made it seem “boring” when compared to its contemporaries. It’s also quite possible that a movie dealing with this subject matter doesn’t hold up today when you consider that most of the effects work Tyler was doing would be rendered by computers nowadays. Still, this imaginative film is downright entertaining for what it is and is probably among the best of the modestly-budgeted B-movies of its era – a definite step up from the sorts of things Canon Pictures was releasing at the time. F/X might not be something I’d specifically hunt down, but it’s well worth checking out if you get a chance. 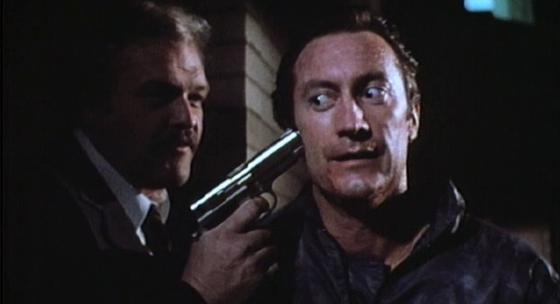 Available in a standalone, widescreen DVD from MGM or as a . Neither package offers any special features to speak of.

6/10 : A couple handfuls of f-bombs and a few other profanities.

2/10 : Mostly implied sexual encounters and Diane Venora prancing about in a neglige

7/10 : A fun movie through and through, even if it’s not something I’d typically identify as being a cult film.

“Nobody cares about making movies about people anymore. All they care about is special effects…..”