THE NOT-SO GLORIOUS HISTORY OF THE FMW DOUBLE TITLE:RULE THE ASYLUM

Pros: Tanaka vs. Ganosuke is BRUTAL; program has a sense of purpose

Chronicling the two-year history of FMW’s prestigious double title championship which was made up of the Independent Heavyweight World Title and the Brass Knuckles Championship, Rule the Asylum (released on video in 2001) really should have been one of the best entries in TokyoPop’s series of DVDs featuring Japanese wrestling promotion Frontier Martial-Arts Wrestling. Other volumes in this series were more or less a hodgepodge of matches that varied in quality from being mind-blowing to absolute garbage, but here was a disc that had only title matches on it and featured the top names in the promotion. Sad then that even this DVD has problems that keep it from rising above mediocrity: though all the matches on the main program are seen in their entirety (my biggest, most all-encompassing complaint about the FMW series overall was the amount of truncation that was done on many if not most matches), two of the five have been included on previous TokyoPop DVDs, prompting a WTF response. When there are relatively few entries in this series in the first place (the series ended after volume 14) and there are literally hundreds of FMW shows to draw material from, why would there be any recycled footage present on these US releases? 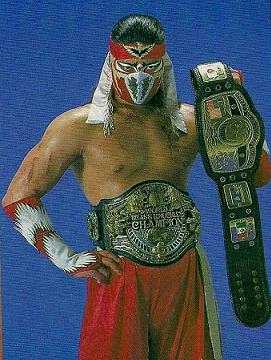 Hayabusa displaying the two belts of the FMW Double Title.

Though FMW was known as a “garbage wrestling” promotion due to the prevalence of stipulation matches and extreme violence (at least in the early days of the promotion), by the time the double title championship was unified in 1996, the promotion was headed more in the direction of becoming more like the American promotion WWF, i.e. focusing on “entertainment” over brutality. Matches on Rule the Asylum therefore focus more on athleticism, though at least one contest here is much more graphic in terms of its level of bloodshed than I’d ever expect to see in the states. Commentating on the card is provided by the (yawn) duo of John Watanabe on play-by-play and Dan “The Mouth” Lovranski providing color commentary. These two seem generally lackadaisical, even when Watanabe starts excitedly blurting out and repeating the names of moves he’s seen in an apparent attempt to win a cracker from the viewer. Announcing on these FMW programs was a problem since day one, and though I like the non-scripted, less jokey commentating provided by Lovranski and Watanabe better than what was heard on the first half dozen FMW discs, the pair simply doesn’t add much to the program. All in all, few of the FMW DVDs would be ones that anyone aside from hardcore Japanese wrestling fans would really need to check out: they pale in comparison to any of the programs released by the then-WWF or ECW promotions. Now that is impressive: Ultimo Dragon with a ridiculous amount of gold. Sheesh!

Here’s the rundown of matches featured on Rule the Asylum:

1. The Gladiator (Mike Awesome) vs. Kintaro WING Kanemura (12.11.1996) – Independent heavyweight champ Kanemura takes on Brass Knux title holder Mike Awesome in this contest from the Komazawa Olympic Park Gymnasium that would unify the two belts and establish the double championship. I was a bit skeptical about this match from the get-go considering the language barriers between the American Awesome and Japanese wrestler Kanemura, and the contest does seem quite awkward at times. Complicating matters further is the fact that these two had very different styles of wrestling: Awesome relied on his power and agility, generally avoiding the most violent matches while Kanemura was more a brawler who reveled in excessive brutality. The fact that the first five minutes or so mainly deal with Awesome getting his foot caught up in the ropes so as to bring him down to the skill level of Kanemura due to the “injury” speaks volumes about the contest, and as a whole, it has a sputtering quality to it. When one guy is firmly in control, it’s ok: Awesome gets to show off his power, Kanemura demonstrates his more rough and gritty style. In the standoffish moments however, it’s clear these two don’t quite know what to do: witness several herky-jerk segments in which moves barely connect – the worst of which is when Awesome gingerly taps Kanemura’s head with a piece of broken table. C’mon Mike – this is FMW: had something like this happened during his ECW days, Awesome would’ve been booed out of the arena. I suppose the match is actually better than I would have thought, mainly due to the fact that Awesome sells the leg injury pretty well, but it’s plenty sketchy at times… Three stars. 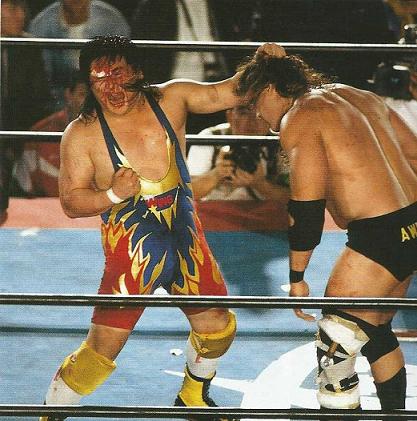 A bloody Kanemura getting fired up during his battle with The Gladiator Mike Awesome.

2. The Gladiator (Mike Awesome) vs. Masato Tanaka (9.27.1997) – From the Kawasaki Stadium, these two powerful rivals square off in a match that was previously seen on The Enforcer compilation; full match rundown can be found in my review of that DVD. It’s an outstanding match for sure (I gave it four and a half stars the first time around), but I’m disappointed and frankly, flabbergasted that TokyoPop would re-use a match that’s already been seen in the FMW video series – even if they are trying to reveal the history of the double title.

…and this is why fans still remember matches between Tanaka and Awesome.

3. Masato Tanaka vs. Mr. Gannosuke (1.6.1998) – Tanaka defends the title against the absolutely brutal Gannosuke in this contest from the Korakuen Hall. After a standoffish start to the match, the two combatants wind up brawling through the crowd (cue a few table spots including one where Tanaka misses the table and lands lower back first on the floor OUCH), and when they finally get back to the ring, Gannosuke uses a broken broom handle to rip the hell out of Tanaka’s bicep. This gaping wound is pretty nasty, even compared with the types of things seen in the most gruesome FMW stipulation matches, and Tanaka proceeds to lose a rather excessive amount of blood throughout the rest of the contest. Gannosuke appears to almost be in Jerry Lawler mode here: doing as little as possible to win the match while obliterating and bloodying his opponent. This of course is a technique used to turn Gannosuke into even more of a villain, but his overall performance doesn’t speak well to his actual in-ring abilities and I would have expected more out of him. Irregardless, Tanaka’s gutsy performance makes this match memorable: even with all the punishment he takes, he’s still able to pull off many of his signature power moves. Down the stretch, a match that was pretty uninspired at times starts to get exciting, and in the end, I’d give it four stars. 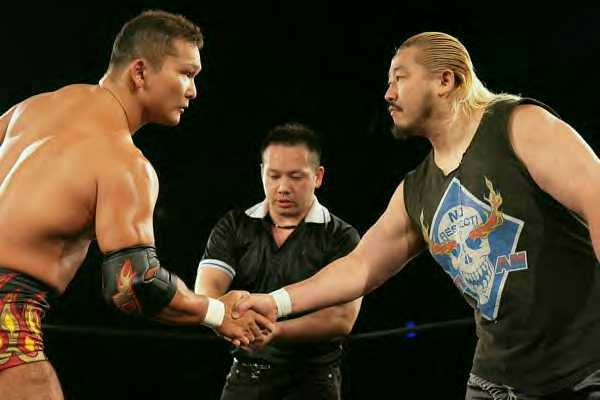 No handshakes in the double title match between Tanaka and Gannosuke – it’s ugly.

4. Mr. Gannosuke vs. Hayabusa (4.30.1998) – Another (surprisingly dull) recycled match; this one featured on TokyoPop’s Flying Assassin compilation: see that review for a full match description. Interesting to note that Lovranski and Watanabe seem to have recorded new commentary tracks for the pair of recycled matches seen on Rule the Asylum, which makes about as much sense as including them in the first place. I gave the match a generous three stars the first time around, but it’s forgettable and not worth watching for a second time. 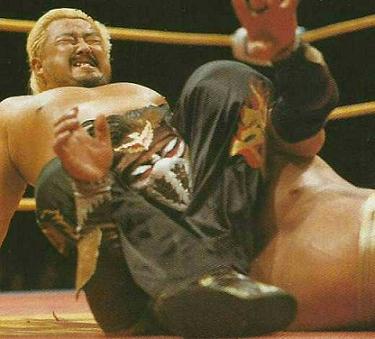 Gannosuke with Hayabusa locked up in a headscissor.

Hayabusa vs. Kodo Fuyuki (11.11.1998) – A classic hero (face) versus villain (heel) match from the Yokohama Bunka Gymnasium, this match pits the barrel-chested wily veteran Fuyuki against the fan favorite Hayabusa. Another obvious clash of styles in this match: Hayabusa dazzles crowds with his technical ability and high-flying moves, while Fuyuki plays the quintessential bad guy, doing as little as possible to win while showing off gritty technique and letting loose with his trademark, high-pitched war cries. A fairly slow, methodical match, this more or less drags through its opening section before getting into some sort of rhythm around the halfway point. Fuyuki eventually lands a pretty gnarly brain buster on the floor against Hayabusa, who retaliates with his showy aerial moves. I almost got the idea here that Fuyuki just wasn’t going to sell Hayabusa’s moves like his typical opponent would: the more popular wrestler was going to have to really work to get the win here, not just land a couple somersault splashes. Towards the end of the contest, this becomes a botch fest, with both wrestlers missing moves and generally stumbling their way towards an unconvincing, lame-o finale: genuinely disappointing even if the announcers attempt to convince a viewer otherwise. Two and a half stars. 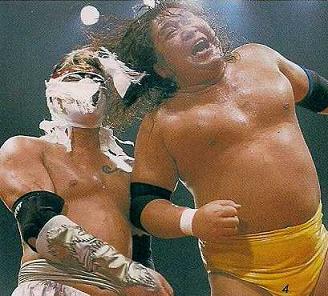 Hayabusa and Fuyuki in battle.

A final noticeable problem with this DVD is that its format makes it impossible to avoid spoilers in the matches featured: a viewer who reads over the match list here knows who is going to win each and every fight. Along with the fact that two matches here were carried over from other FMW DVDs, this makes Rule the Asylum much less enthralling than it really should have been. We’re told right off the bat that achieving the Double Title Championship was the ultimate goal of every wrestler in the promotion, but I’m not sure this hit-or-miss lineup of matches could actually convince a viewer of the title’s importance. As this program wears on, the caliber of matches here actually gets worse, and the retirement of the belts in 1998 doesn’t seem like an altogether bad idea. In the end, we’ve got another FMW DVD that ultimately does little to dispel the notion that FMW was at best, a second-tier Japanese wrestling promotion that never really could compete with either the outright insanity and violence of Big Japan Pro Wrestling or the spectacle of either New Japan or All Japan. Hardcore wrestling fanatics might want to check out this DVD, but those looking for honest quality in their wrestling entertainment would be wise to look elsewhere

Decent but not great quality, full-frame DVD from TokyoPop includes a trailer gallery and selection of wrestler bios as well as two bonus double title matches:

1. Masato Tanaka vs. Kintaro Kanemura – Champ Tanaka faces off against the always game Kanemura in a rough technical match. Shown in highlighted form only with no commentary, this match features bad attitude galore from Kanemura who power slams Tanaka through a table from the ring apron, then proceeds to use the broken wood fragments and even the ring bell against the champ. At one point, Tanaka delivers a ridiculous lariat that whips Kanemura around like a rag doll, and the match culminates in an exchange of brutal forearms. A decent match overall. Three stars.

2. Hayabusa vs. Hisakatsu Oya – Heavily edited match (16 minutes down to three) with intermittent Japanese-language commentary in which champ Hayabusa faces off against the technically gifted Oya. After an initial grappling exchange, Hayabusa demonstrates his usual, dazzling array of high-flying moves, including a vaulting suicide dive over the corner turnbuckle that lands on Oya outside of the ring. Final back and forth battle of suplexes is kind of cool, but these highlights don’t convey much about the quality of the match. One and a half stars.

5/10 : Though this DVD as a whole is not as rigorous as other FMW programs, it gets plain nasty at times

1/10 : Some rough language and vague threats

0/10 : Not even a single homely woman in spandex to be seen

5/10 : Fairly straight-forward Japanese wrestling disc, though more worthwhile and consistent than some.

“Whoa Dan – you’re starting to sound like some of these marks on the internet…”  HEY, WAIT A MINUTE….