Cons: Completely…utterly…hopelessly unnecessary, phonier than a three dollar bill, and dumber than five boxes of rocks

Another week; another positively ludicrous phony monster hunt program. Alaska Monsters is the Destination America channel’s latest entry in the crypto-reality genre, following the exploits of a monster hunting crew located in the “last frontier” of the forty-ninth state. As has come to be the norm, we have the usual gang of characters: team leader “Little Bear,” a trap engineer named Todd, tech specialist Levi, a fellow named Rhett who’s billed as the “rookie,” a trapper named “Face” who’s the obvious “wild card” of the group and finally, a “researcher” who goes by the name of – get ready for it – “Crusty.” This gang, known as the “Midnight Sons” has been tracking creatures in Alaska since 2008 (at least if you believe anything this show is trying to tell you), and in the first episode of the reality show revolving around them, go in search of Alaska’s Bigfoot-like creature that’s known locally as the “Wild Man.”

The program follows the now very well-established monster hunt formula to a ‘T’: it starts with the initial night “recon” mission, involves a few eyewitness accounts (one of whom declares he was “out here gettin’ wood with my dog…” sounds like a personal problem), and sputters towards a final “midnight hunt” that puts the team directly in the path of an imaginary beast created solely through dubbed-in sound effects and blank expressions of fear from the actors…er…team members. Alaska Monsters seems a bit more modern in terms of the gear used during the investigations featured on it: in this first episode, the team not only utilizes night vision and FLIR infrared technology, but also a small drone with a camera mounted on it to survey the nearby landscape. This allows the seemingly misplaced Levi character (who seems not at all at home alongside a group of people one would expect to see waiting in line at the local soup kitchen) a sense of purpose in the show. Rhett, on the other hand, has nary a thing to do throughout the program and I’m not even sure that he takes part in the final night investigation that mainly involves the team tramping around a saw mill with firearms at the ready. After some obviously scripted “suspense” (“Oh no! A production assistant is shaking this blind I’m sitting in!”) and plenty of dubious acting on the part of the cast, the team walks away without a single solitary piece of evidence relating to the creature they’ve been pursuing. The show (like every episode of Mountain Monsters) ends with the crew making vague insinuations and wisecracks about the existence of the creature in an attempt to convince a viewer that he hasn’t just witnessed a load of complete bullshit. 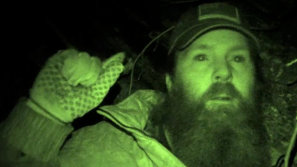 It really is astonishing to me that somewhere, some network executive is giving each and every one of these absolutely ridiculous and devastatingly pointless monster programs the green light – and actually spending some money on their production. The ultimate sad fact about shows like this one, Monsters Underground, Swamp Monsters and Mountain Monsters (which lost all credibility or, more importantly, sense of fun it once had during a painful to behold second season) is that they make shows like Destination Truth and even Finding Bigfoot look not only like top-notch entertainment but actually, undeniably credible. Let’s not forget that Destination Truth’s host Josh Gates wasn’t at all afraid to admit that he found no evidence of the at best rare and more probably completely imaginary creatures he was seeking and Finding Bigfootstill has not one solid bit of evidence after five full seasons. The notion of a monster hunt program that doesn’t instantaneously come up with a creature seems almost preposterous in context of this new breed of monster hunt programs exemplified by any of the Mountain Monstersclones that not only invents fictitious and frequently outlandish beasts, but then tries extremely hard through glaringly phony video evidence, sketchy eyewitness reports, and falsified, scripted scenarios to convince the audience of their actual flesh and blood existence. I’m kind of scared to see what happens on the next season of Finding Bigfoot: will that show even continue when it becomes impossible to ignore the fact that there’s still nothing on the hill?

After an overload of absurdly similar and increasingly worthless programs, I would hope that most people would recognize the fact that very few of these monster-related shows are even making any attempt to be authentic in their presentation of content. Hence, it’s impossible for any savvy viewer to take these shows as anything except entertainment – they clearly are not documentaries. That said, it’s surprising how lousy most of them are in the entertainment department, and I think most of that is directly related to the fact that there is absolutely no originality to these shows. Alaska Monsters is a carbon copy of Mountain Monsters, a fact which is best exhibited by examining the characters. Trap builder Todd (much in the way his counterpart Willy does in Mountain Monsters) sets about building the most outrageously elaborate and positively impractical traps one could possibly imagine. In order to catch a Bigfoot-like creature, Todd constructs a “cylinder snare trap” – basically a huge tube with a system in place to close metal wire around a creature trapped inside of it. Why any beast would actually go inside this contraption in the first place is never explained (do these “expert trackers” not realize that their human stench would be hanging over this device like a fog?), and it’s no surprise when something goes wrong with the mechanics of the device and it’s not actually unusable. 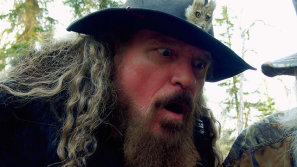 Additionally, we have smarmy narration provided by the appropriately named “Crusty,” a guy who seems vaguely unlikable and sleazy (or maybe it’s just that I can’t see the fashion value of the animal claw he wears in his thick, bushy beard) and “Face,” the obligatory “wild card” character who talks in a raspy, cartoonish voice and achieves moments of enlightenment when discussing wild man “doo doo” and imitating Fred Flintstone. I couldn’t possibly make this stuff up. The characters here seem way too “hammy” and almost make Vincent Price performances from the 1970s look restrained in comparison. All in all, there’s simply no way one could take anything in Alaska Monstersseriously – not when “Little Bear,” sporting an outfit that makes him look like a complete d-bag, starts mystically playing a pitch pipe around a campfire and discusses his tendency to “burn sage.” Seriously, where’s Bobo and Ranae when you need them?

So…”Little Bear” (in the center) is wearing ass-less chaps, some sort of fur stole, a cowboy hat with the face of a small weasel on it, a fistful of gold rings, and a big, blinging medallion shaped like either a grizzly bear or a domestic hog. And we’re supposed to take this show at all seriously.

I’ve gotten to the point where there’s no way to even describe how atrocious shows like Alaska Monsters really are: this fails horribly as a monster-related program due to not having one iota of credibility, but even as the trashy, clinically dumb piece of populist entertainment that it is, it’s a complete waste, way too similar to other monster hunt shows that any viewer who watches this program probably would be familiar with. The producers don’t seem to be aware of the fact that they’re running this genre of television into the ground through pure, unadulterated, unchecked overkill, and I sincerely hope that someone behind the scenes is making hay while the sun shines, because the genre of the crypto-reality show is very quickly outlasting its relevance and has already overstayed its welcome. Programs like Alaska Monsters not only seem entirely capable of ruining anyone viewer’s interest in the subject of cryptozoology, but make me long for a program where a mysterious creature isn’t instantly located by a group of morons whose idea of “tracking” a creature is whooping, hollering, screaming, and careening through the forest while explaining each and every obvious move they’re making to an audience who is well aware of the absurdity of what they’re watching. I also don’t need any scenes of hobo-looking fellas giving each other a brofist each time they make a smart-ass, scripted remark about a fantasy creature. I never thought I’d say it, but I’m actually looking forward to the new season of Finding Bigfoot just to provide some sort of balance to a genre that’s well out of control at this point – better prepare the lifeboats just in case though…