Pros: Quite funny at times; sleazy as all get out

Directed by Mexican trash auteur Rene Cardona, Jr., 1977’s ¡TINTORERA! (a.k.a. Tintorera: Tiger Shark) plays like a mashup of Jaws and a soft porn movie. Loaded with scantily clad bodies and lots of free lovin’, this gloriously trashy film follows the (s)exploits of Steven and Miguel, two of the least likely Lotharios that the cinema has ever seen. Steven, an absurdly wealthy American businessman, has traveled to (a pre-Spring Break haven) Cancun to live on a rather lavish houseboat as an escape from the stresses of his job, while Miguel makes money by “exploiting” the local women. After feuding over the affections of the same woman, Steven and Miguel become buddies, working in tandem to bed any female in their vicinity – all of whom seem to be of the ditzy and/or skanky variety. Eventually, the two set their sights on an English tourist named Gabriella, setting up a “perfect triangle” in which Steven and Miguel get all the sex they want as long as they don’t fall in love with the plucky woman. Meanwhile, as the two guys struggle with what appears to be unfulfilled homosexual attraction for one another, a large tiger shark cruises the nearby waters, searching out human victims and building up (?) to a not-so epic showdown between man and beast.

Written by director Cardona, Jr. from a novel by oceanographer Ramon Bravo (who also served as the cinematographer on the film and did a horrible job I might add), Tintorera hardly plays like a horror film at all. This picture is much more concerned with the romantic exploits of its leading male characters, and in doing focusing on these moronic, horn-dog characters, it very nearly becomes a comedy. While I could almost buy the athletic and confident Andres Garcia in his portrayal of Miguel as the type of man women might fawn over, the stiff-as-a-board Hugo Stiglitz is so awkward in his acting here that the film is quite often hilarious. Constantly in a cranky, surly mood and having the tendency to snap at the people around him, it’s impossible to buy this dude (who in the hands of Stiglitz, arguably one of the least talented actors ever to have some semblance of a career, comes across not only as a total creeper but as a complete jerk off and tool bag) as getting anywhere near the amount of tail he does in this film. I love the numerous scenes where Stiglitz stares blankly either directly into the camera or at the woman he’s supposed to be wooing – this man has the charisma of a barn door. The atrocious dubbing in this film doesn’t help matters either since none of the dialogue has any sort of emotion behind it. As a result any of the “drama” in the story (of which there is plenty) is pathetically ineffective; considering the film runs more than two hours long in its director’s cut version, this makes for an extremely drawn-out and boring film. I should point out that the 85-minute “Americanized” version of this film isn’t any better: it’s even less coherent and still tedious.

This, friends, is acting…FEEL THE ANGST.

But wait: I know what you’re saying. There’s gotta be some shark action somewhere in here right? Indeed there is. Still, in the hands of Cardona Jr., a viewer shouldn’t be expecting much. Swimming along to a burpy and flatulent musical theme created by composer Basil Poledouris (a bigger talent than this film ever deserved), the less-than-impressive, murderous “Tintorera” is created through the use of an endless supply of stock footage showing normal-sized tiger sharks – ignore that character who insists the beast is twenty feet long…PLEASE! Occasionally, the creature attacks a swimmer or diver, leading to some of the most clumsy gore sequences imaginable. Brutal violence including images of gut-leaking human torsos sinking to the ocean floor or a scene in which a diver’s head is wedged in a shark’s mouth can’t make up for the fact that it’s difficult to determine what’s happening in any of these sequences due to the scatterbrained editing. Especially frustrating is the finale: one of the most inconsequential and muddy endings ever committed to celluloid. After a series of seemingly unconnected images, Tintorera just ends without solving anything. It’s unbelievable that any director (let alone one that, by 1977, had nearly fifteen years of feature film credits under his belt) would have ever believed that this was an effective way of telling a story: in comparison, Lamberto Bava’s 1984 Jaws-clone almost… almost… resembles a good movie.

Level of sleaze throughout the film is ridiculously high. You’ll need a cold shower afterwards.

I suppose given that the film mainly deals with a pair of promiscuous, unlikely man-whores that it’s not entirely surprising that this film is loaded with an astonishing amount of nudity and sexual content, but what maybe is shocking is the appearance of several actresses of note in this piece of trash flick. Susan George of Straw Dogs fame plays the fairly substantial role of Gabriella, demonstrating that her career truly had hit rock bottom by the late ‘70s. George looks great without a top on but can’t do anything to enhance the level of melodrama relating to her character. Also, like many of the characters in this film, her mood switches on a dime for no reason whatsoever: there’s no consistency to this story or the players in it. In peripheral roles, British genre actress Fiona Lewis and a pre-Three’s Company Priscilla Barnes are nothing more than eye-candy in a picture that’s remarkably sleazy and undeniably chauvinistic. Simply put, a picture that demeans women as much as this film does simply couldn’t be made today. It’s worth pointing out however that Tintorera offers up nearly as much male nudity as female. Garcia’s pasty white behind is probably seen more than the shark, and there’s even some brief full-frontal glimpses. Frankly, seeing Stiglitz paraded around in a Speedo (or having to glance upon his unclad can) was enough to make me wanna lose my lunch: presenting this buffoon as the ultimate stud muffin is just absurd. 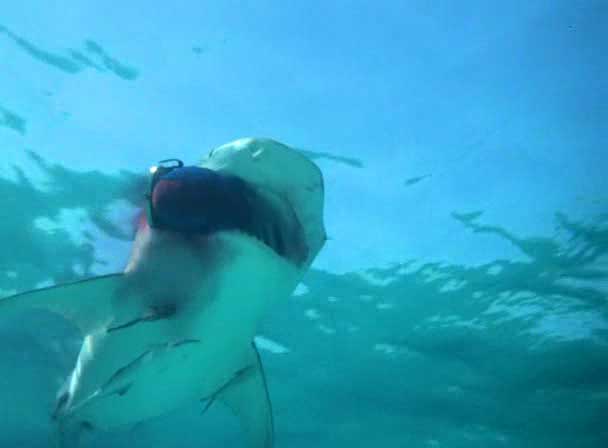 As questionable as this movie is as a whole, it’s most reprehensible for its presentation of positively gratuitous wholesale animal slaughter committed once Stiglitz decides to go on a one-man crusade against all sharks. Though perhaps not as rigorous as what the cannibal genre of horror movies would shortly unleash upon the world in terms of authentic onscreen death, I quickly grew sickened by scenes of sharks being killed either by “bang stick” (i.e. a sort of prod loaded with a rifle cartridge which is fired into the shark’s brain, causing a twitching ballet of suffering and death in the stricken animal) or by being beaten over the head with a club while being dragged out of the water. Some of these scenes are quite bloody – aside from the shark deaths, a turtle is also sliced open, allowing its entire blood supply to drain out – and while the deaths of sea animals isn’t as offensive to most people as watching land animals being killed (why exactly is that?), knowing that many shark species are now endangered precisely because of this type of behavior on the part of humans makes these scenes all the more disgusting and distressing to watch.

In the end, what we have here is one of the lousiest of the low-grade Jaws clones to come out in the late 1970s and early ’80s: a film that blows any opportunity it had to succeed by not only mismarketing itself as a horror film, but by giving us a script that is simply painful to sit through. One can almost imagine with some (or hell…a LOT of) tightening up and tinkering, this flick could have at least been watchable – the amount of gorgeous women willing to drop trou on camera alone should have been enough to maintain some level of viewer interest. As it is though, Tintorera is not only sloppy and ugly to look at despite it’s idyllic locations, it’s a outright mess. Full of jaw-dropping dialogue, preposterous story elements, crude gore effects, and wooden acting, it may be one that fans of bad movies would enjoy (I for one laughed a lot), but it’s not something most people would ever need to see.

“25th Anniversary Edition” from Desert Mountain Media presents a rather soft full-frame print of the film. Both Spanish and English are spoken during the film, and an optional subtitle track translates whatever is being spoken to the other of these two languages (i.e. if English is being spoken, it translates into Spanish). Aside from very brief cast and crew biographies, a selection of trailers to other Spanish-language films is the only bonus material included.

8/10 : Some graphic gore effects relating to shark attacks, but the real shocks are provided by authentic scenes of animal slaughter. This last thing makes the film all the more distasteful, but it’s very much a product of its time.

3/10 : Very isolated, rather minimal instances of strong profanity in the subtitle tracks. It’s really the overpowering stupidity of the dialogue that’s offensive.

8/10 : A ton of full nudity (both male and female) and sexual content, but this film isn’t at all titillating despite the presence of some good-looking women.

5/10 : Certainly one of the more bizarre Jaws clones out there, but also one of the most dull and boring of the bunch.

Dialogue, or description of the film: “It was horrible…HORRIBLE. This goes beyond anything.”

WARNING! Trailer Not Suitable for Work!