“THOSE CRAZY KIDS…” THE DUMB BUT LOVABLE TEENAGERS FROM OUTER SPACE

Pros: Tons of fun and surprisingly competent for a film of this nature

Made for the ridiculously low sum of $14,000, 1959’s Teenagers from Outer Space has (unsurprisingly) picked up a cult reputation over the years as being a film in the Plan 9 From Outer Space vein of being so bad it’s good. To label it as such however is doing a bit of a disservice to one Tom Graeff, writer, director, actor, cinematographer, editor, special effects artist – hell, the auteur behind this film. Graeff, who at one time worked with the one and only Roger Corman and who is known in some circles as the “gay Ed Wood,” made only a handful of films in his lifetime (most of which are assumed lost), yet has been the subject of endless speculation and interest largely because of his . Watching Teenagers, by far his more available, well-known and accessible film, gives one the idea that this guy legitimately had some talent for cinema – but simply lacked the budget he needed to make what would have been considered a “good movie” by any standard. There’s a ton of creativity here, and the movie is actually very clever and competently produced – especially when one considers the almost non-existent budget (for comparative purposes, the estimated budget of Plan 9 was $50,000, and even the abominable Manos: The Hands of Fate cost some $19,000).

Director Graeff sure got his money’s worth out of this dog skeleton prop – it’s seen several times during the course of the film for no reason whatsoever.

Playing out in a manner vaguely similar to dozens of genre films of the ‘50s, Teenagers begins with a group of aliens landing in the remote American countryside in search of habitat for an extraterrestrial breed of livestock called the Gargon. These creatures look like lobsters (hell, they are lobsters as seen in the film), but can rapidly grow to enormous size – particularly when they’re fed. After determining that Earth’s atmosphere is suitable for these creatures despite the fact that they will devour the resident population of the planet, a younger member of the extraterrestrial party named Derek decides that he’s fed up with the alien way of life and scurries off into the brush. The thing that pushed Derek over the edge? The random vaporization of a dog by an especially blood-thirsty alien named Thor. How rebellious! From here, the film becomes a sort of chase thriller, as Thor attempts to track down the plucky Derek while both aliens are forced to interact and come to terms with the unfamiliar earthling civilization. This portion of the film mainly focuses on Derek’s relationship with a young woman named Betty who, along with her grandfather, tries to help the alien fugitive escape his pursuer. All the while, the first Gargan released on earth continues to grow exponentially while shackled up in a nearby mining cave…

Graeff’s script is undeniably goofy, with mind-numbing gaps in logic and ridiculous dialogue passages, occasionally hammering the audience with ideology and a heavy-handed “message” about where humanity is heading (incidentally, in the late 1960s, Graeff would make a case for bisexuality as the cure for humanity’s ills on a self-help LP!). The basic story in the film would also be super familiar to any viewer who’s seen a sci-fi flick or three, but the handling of this picture is so undeniably earnest that it’s hard not to be sucked into this lovable little film. Graeff’s direction is actually quite assured and confident – it definitely doesn’t look like this was the product of a hack director making a (possibly ill-advised) attempt at a feature, and what Teenagers from Outer Space lacks in terms of a budget, it makes up for in unbridled ingenuity. Sure, the alien ray guns are obviously dime store toys and some of the scientific gadgets they slave over clearly identify themselves as being pro audio equipment, but Graeff honestly does a remarkable job of making this film seem much “bigger” and frankly, better than it had any right to. 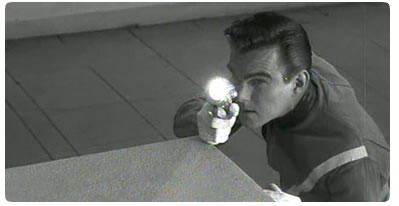 Yep – that is definitely a “disintegrator ray.” I should know.

It’d be difficult to find another (basically) no budget movie from this time period that recreated both the exterior and interior of a flying saucer, realized a monstrous creature’s rampage through the countryside, and was able to pull off the illusion of human flesh being vaporized in an instant, leaving only skeletal remains behind. Mind you, most of the visuals in this film are captured in a manner that reflects the fact that almost no money was spent on this picture: the monster is obviously a superimposed lobster (or, even worse, the shadow of a lobster) dropped on an existing live-action background, the same, wired-together skeleton is seen in every vaporization death, and an observant viewer would be all to aware one particular car is going to be destroyed in a matter of moments since it’s the most instantly “dumpy” looking automobile seen onscreen. Still, $14,000 would barely have been enough to cover the camera, the film itself, and the editing/processing fees in 1959: for Teenagers from Outer Space to even begin to resemble a competent feature rather than home movie garbage is reason enough to commend Graeff for his ability to overcome obstacles.

OK, so the costume department raided the Air Force Surplus Store. That’s no reason to start hating on this movie.

Starring as the stereotypically misunderstood (supposed) alien teenager is David Love, a.k.a. Chuck Roberts and who was actually born as Charles Robert Kaltenthaler. At the time of production, Love was romantically involved with director Graeff, and you almost get the feel that this entire film was an attempt by the writer/director to make a vanity-type starring vehicle for his lover. Unfortunately, like most of the actors in this film, Love’s performance is a bit on the wacky side: his line recitation is too mechanized and robotic for any of it (particularly the lines that hint at his feelings of affection towards Betty – “You make me angry …but I like you very much…”) to be taken seriously. Betty, meanwhile, is played by the cute but somewhat annoying Dawn Bender, sporting a rather odd-looking hairdo. Bender tries her hardest to sell the romantic angle of the film, but almost oversells her emotional responses and nearly becomes laughably melodramatic at various times during the piece. It’s terrible to say, but her voice also grates on the ears and I kind of just wanted her to disappear from the narrative at a certain point.

Coming across as the human equivalent of , it’s frequent Ed Wood film actor Harvey B. Dunn’s playing “Gramps” that most often cracked me up during the film. Almost gleefully unaware of what’s happening around him until late in the going (at which point he decides to narrate the showdown with the lobster monster), Dunn seems to be struck with attacks of senility intermittently throughout the film – look for the scene where he has difficulty crossing the road (“Where’s Gramps?” “Oh there he is, trying to cross the street!”). Additionally, we have Bryan Grant playing a decent villain as the perpetually surly Thor – all to willing to use his “disintegrator ray” on any and all living things, King Moody (Ronald McDonald as seen in commercials of the ‘70s and ‘80s) as the alien commander, and director Graeff himself as reporter Joe, who seems to constantly be at the wrong place at the right time. It’s worth pointing out in regard to this cast that Teenagers from Outer Space was made in the opposite manner that many films are made: some dialogue was pre-recorded (as opposed to being dubbed in later), which required that the actors mouth the lines later when the sequences were actually being filmed. This (and the fact that many characters in the film don’t use contractions) many lines of speech in the film seem definitively “off,” though this only adds to the schlock appeal of the picture.

This final shot only confirms the fact that we’re watching the one and only David Love vanity film.

Like many and/or most B-movies, Teenagers from Outer Space simply wouldn’t be to the liking of viewers who get off on the appreciation of legitimately “good movies.” This film has numerous, utterly preposterous scenes – and actually cops out precisely when it should be visualizing some highlight moments due to a lack of money. The big invasion of the saucermen? It’s related by dialogue only, and we’re also more or less left to assume that the Gargon is dangerous, since it mainly lurks offscreen throughout the film. Nevertheless, without doubt a ton of hard work and conviction went into the production of this film, and it winds up seeming like a bit of a shame that Teenagers not only didn’t “make” Tom Graeff’s career in the movie business, but may have instead been the catalyst that sent him on a downward spiral into insanity (within a few years, he was proclaiming himself as “Jesus Christ II” on the street on Sunset Blvd.). Pictures like this one also indicate why films that attempt to replicate the feel of old-time genre films frequently fail in monumental fashion: it’s nearly impossible to recreate the personal touch applied by auteurs like Tom Graeff, Edward D. Wood, Jr. or numerous other genre filmmakers. Even though Teenagers from Outer Space is no masterpiece, I’d go so far to say that it is one of the better genre flicks of the ‘50s. It certainly succeeds in terms of overcoming budget limitations to deliver a thoroughly entertaining, endearing film that has a ton more heart and charm than any amount of positively soulless studio blockbusters. This is about a must for fans of cult cinema.

This public domain film has been released in numerous DVD packages, including one hosted by Elvira and as an episode of Mystery Science Theater 3000. It can also be viewed in its entirety .

2/10 : Humans (and incidentally, dogs) reduced to skeletons! Some minor violence, but nothing serious. 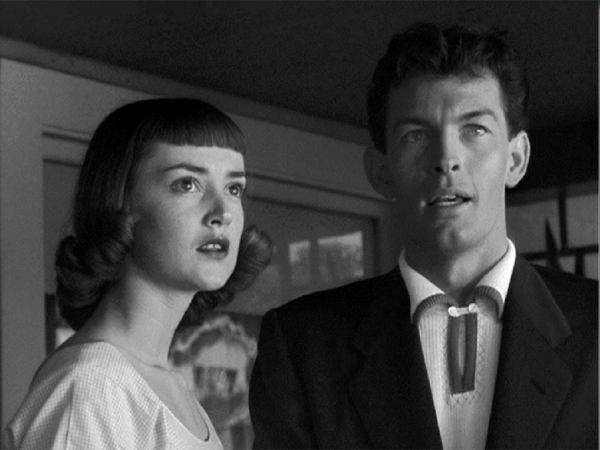 0/10 : Though frequently absurd, the dialogue here does not include any profanity or, strangely, contractions

9/10 : Title alone should indicate how cheesy and corny this flick is; outrageously entertaining for fans of “bad movies.”

“It’s some kind of foolish joke…I’m not going to keep a job where this sort of thing goes on.”