TO BOLDLY DELIVER ONE OF THE WORST NES GAME ENDINGS EVER…” STAR TREK: 25TH ANNIVERSARY

Pros: Decent puzzles with some freedom to experiment; enjoyable recreation of the atmosphere of the old TV show

Based on the popular television show of the 1960s, Star Trek: 25th Anniversary for the NES plays somewhat similarly to the series of “point and click” strategy games made for the system that included titles like Princess Tomato in the Salad Kingdom, Shadowgate, and Deja Vu. These games were known for their series of static screens and minimal animation: a player advanced in the game by choosing actions from a menu and solving various puzzles by pointing and clicking. Similarly, Star Trek is rather clever for the fact that a player must utilize found items and ingenuity to solve a series of puzzles- but it’s also noticeably unexciting even if this game has quite a bit more to it than the typical point-and-click game. There are precious few “action sequences” in Star Trek, and the low-key, “what just happened” ending makes the title seem almost inconsequential. It’s well designed and relatively fun to play, but several missed opportunities keep it from being outstanding. The game recreates the TV show’s opening sequence, complete with a blip-bloop version of the famous theme music.

Stardate 2831.3. The USS Enterprise and its most famous (original) crew (including Captain James T. Kirk, medical officer “Bones” McCoy, science officer Spock and others) is caught in a space-time anomaly and flung into an unknown region of the cosmos, far from home. A player’s main task in the game is to guide the Enterprise and its crew through a series of planets seeking the invaluable and much-needed dilithium crystals that will power the spacecraft back to known space. This journey involves gameplay segments taking place both on the Enterprise itself as it traverses space, encountering potentially hostile enemy ships and sequences in which Kirk and a landing party must explore strange new worlds and interact with civilizations on various planets. Each of these expeditions begins with the player choosing two additional landing party members from available personnel, each of which have their own specialized tasks. Spock, for instance, may be the most well-rounded and valuable landing crew member since he’s knowledgeable about many different subjects. The other personnel choices (medical officer McCoy as well as a biologist, historian, geologist, and even a security officer) each have strengths and weaknesses, allowing the player a bit of leeway with regard to how he completes the game. 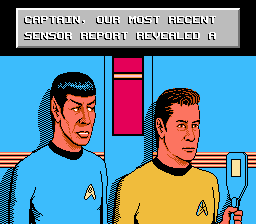 Spock – always throwing his two cents into every discussion…

On board the Enterprise, the game adopts a first-person perspective taken from the captain’s seat situated in the middle of the ship’s control platform. From here, a player can consult the various, familiar faces on board the ship – from navigator Chekov to pilot Sulu, feisty engineer Mr. Scott and communications officer Uhura. It’s pretty cool that these characters get their own little cameo as it were in the game during these segments, but many of these people really have no purpose in the game other than to be “placeholders,” given a line of dialogue here and there but being of little consequence to the game as a whole. Additionally, there are relatively few tasks a player can undertake from this position – mainly, the sequence on board the Enterprise acts only as a bridge between one landing party mission and the next. Occasionally, a player has to interact and deal with enemy ships, and it’s possible to navigate towards and land on any number of alien planets. Relatively few of these alien worlds are necessary for the game’s completion however, and it seems like the limited technology of the NES holds this game back from being a more wide-ranging, “bigger” gaming experience.

Landing party investigating a native village – the “ritual dance” described looks to me to be nothing more than a naked dude running around like an idiot.

Clearly, the main focus of this game is the sequences in which Kirk and the chosen landing party have to deal with unknown situations on alien planets. During these sequences, a player must navigate around an overworld-style map, stumbling upon outposts of civilizations and performing certain tasks. All of these levels have interesting aspects to them: one is a swamp-like level inhabited by primitive people, another is an illegal arms trading outpost, and there’s even one that’s a sort of recreation of 1920s, big-city America replete with gangsters and card sharks. Most of the puzzles offered up for the player during these sequences are pretty straight-forward – the typical NES gamer will have no problem moving forward in the game and, since there are relatively few enemies present, it’s likely that some these levels will offer up little challenge. Later in the game however, the puzzles a player has to solve become increasingly more outlandish and, since the game doesn’t offer up many hints or clues with how to perform certain tasks or make progress in terms of the ongoing story, it’s possible (and maybe likely) to become “trapped” at certain locations in the game, not knowing what to do in order to continue forward. Circa 1992 when this game was initially released, the potential to become incredibly frustrated with the game was very high – I recall a time when I rented this game in the early ‘90s and had nearly completed it before I became hopelessly “stuck.” Luckily, in 2014 there are numerous “walkthroughs” and “how-to” guides posted on the internet which explain exactly how to beat this (and most other) NES games. This solves one issue and creates another – though it’s possible with help from walkthrough guides to easily solve all the puzzles, the game at that point becomes a breeze, offering up few challenges for the player.

Needless to say, once you figure out how to complete this game, there’s very little point in playing it again anytime soon (or maybe even ever). The game is enjoyable for constructing a basic story that’s pretty consistent with what one might have seen in various episodes of the original Star Trek television show (yes, Spock gets to do the “mind meld”), and I did like the fact that all the familiar characters are included (even if for glorified cameo appearances). Additionally, it’s admirable that this game adopts the same “violence isn’t necessarily the answer” attitude that was one of the main ideas of Star Trek from the beginning – too many NES games adopted the “shoot anything and everything” mindset simply out of convenience, and it was cool that the Star Trek game held onto the basic principles of the TV show. On the other hand, this game feels extremely limited in its scope: there’s only one “correct answer” as it were with regard to progressing through the storyline – if you don’t do this exact thing, you won’t win the game. Even if a player can choose which landing party members to play through the story with, the way one completes the game never changes and thus limits the replay value. I also have to say that this game’s conclusion may be one of the worst endings ever seen in an NES title. Once you complete the final necessary planet level, there’s a lame block of dialogue between characters and the game resets back to the title screen: there’s absolutely no sense of accomplishment in finishing the scenario and the dull finale is incredibly disappointing given the time investment required to complete the game.

So…I played through this whole flippin game for THIS???

Graphically speaking, Star Trek: 25th Anniversary (developed by Interplay and released by Konami’s Ultra Games division) is pretty good considering the time in which it was made. The fairly realistic, first-person views from inside the Enterprise are neat (check out the avatars used to represent the various crew members talking to Kirk), and the more cartoony graphics used during the planetary missions are typically eye-catching. I also rather liked the animated teleportation sequence and the nifty recreation of the television show’s opening title sequence, goofy though they are. Sound throughout the title is more a mixed bag: the programmers have faithfully replicated the original Star Trek theme as a chiptunes track, but the original music during the game is actually a bit grating on the ears. These tunes certainly aren’t the most catchy NES tunes I’ve ever heard – they frequently showcase odd harmonic choices and dissonant notes and I quickly got tired of hearing the endlessly repeating music. I’d classify the length of this game as being decent: it’s comparable to the length of Kemco-Seika’s “point and click” wonders of the Shadowgate variety though Star Trek isn’t quite as detailed and polished as those titles.

All things considered, Star Trek: 25th Anniversary does exactly what a player would want it to do. It’s enjoyable as a title based on a classic bit of television and is perhaps one of the better licensed games for the NES system. The gameplay offers up a bit of everything, and I rather like the puzzle-solving format even if it is potentially frustrating. Fans of Star Trek would probably be amused by this game’s attempts at recreating the feel of the original show (right down to the “witty” banter between Kirk and his crew) and non-fans would simply dig this game’s fairly unique approach. The game doesn’t offer much in the way of replay value and actually is disappointing to get through due to its lame-o ending, but I’d call it a worthwhile NES title nonetheless.