SHARKNADO 2: THE SECOND ONE

Pros: As much as it pains me to say, this is significantly better than the first film…

Cons: …but it’s still overwhelmed with problems and dumber than a box of rocks.

In 2013, as a sort of culmination of their ongoing series of clinically moronic, low-budget and CGI-overloaded monster flicks, Syfy Channel debuted Sharknado to enthusiastic fan reaction – and some of the worst critical maulings that any film could be expected to endure. Though many viewers (inexplicably) championed the film (want to be amused? Check out the downright hostile back and forth banter in Sharknado’s Amazon reviews section), I found it to be unimaginative, technically inept, and an utter waste of time. As might be expected given the types of films made by film studio The Asylum who produced Sharknado (along with most other Syfy Channel creature features), a sequel was in the works faster than you can say “HOLY SH….ARK” and Sharknado 2: The Second One debuted in late July, 2014. 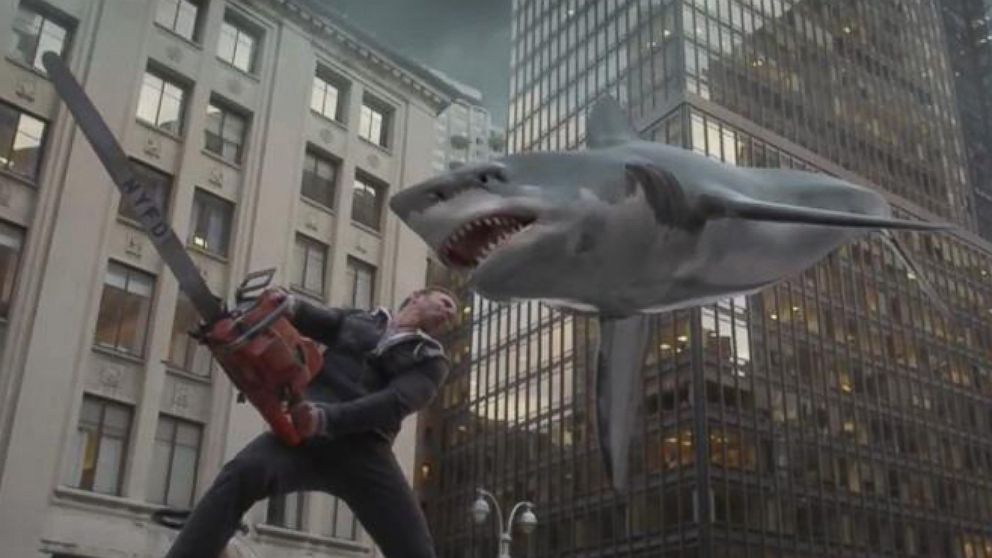 Considering the handling of the first Sharknado by director Anthony C. Ferrante and writer Thunder Levin, since both of these cats were back on board for the second film – and knowing that this sequel would probably be afforded a bigger budget, thus allowing for even more excess – I was fully expecting Sharknado 2 to be a cinematic representation of Ferrante coming in his pants for 90 minutes straight. This director/writer team couldn’t keep it together making a somewhat more modest production the first time around; why would I ever believe they’d have any chance of corralling an ever bigger production? Needless to say, my suspicions were confirmed: Sharknado 2 goes so far off the deep end that it pushes the envelope in terms of its ineptitude and stupidity well beyond a threshold I believed could even be sustained. A scene in which Ian Ziering, reprising his role as “Fin” Shepard, picks up a extended-blade chainsaw, arches his back and slices through an oncoming shark as if the chainsaw is an extension of a massive erection really says all one needs to know about this film and the juvenile mindset that went into its development and construction. The sequel is even louder, even more obnoxious, and even more questionable as a piece of cinema, yet the fact that scriptwriter Levin jettisons any attempt at justifying the story this time around ensures the film operates (in much the way that Army of Darkness worked) as a straight comedy with horror movie undertones. As much as I hate to say it, Sharknado 2 actually is quite a bit more enjoyable than the first film.

At least this film doesn’t descriminate: there’s a wide variety of shark species in this Sharknado.

The film wastes nary a second for any sort of explanation: it instantly assumes a viewer would have seen the first film, be familiar with the characters, and grasp the basic scenario. Right off the bat, we have Sharknado 2’s first ripoff moments, as Fin and his estranged wife April (played by Tara Reid, once again proving she has no acting chops whatsoever) are seen on a plane traveling to New York City. Before a viewer would even realize he’s seen this scenario before, we’ve got several blatant, sledgehammer-like “homages” both to Airplane! (hello Robert Hayes!)and The Twilight Zone, as Fin glimpses sharks swirling in a cyclone from the window of his plane. Sure enough, following the most inconsequential crash landing in cinema history – literally, the plane crashes and the plot moves on, never mind the hundreds of people who probably were just killed or the fact that April had her hand bitten off by a shark when the creatures attacked the airliner – a freak “sharknado” storm system sets its sights on the Big Apple. Inevitably, it’s up to Fin and a group of friends and family to combat both the sharks and the weather systems. Because, you know, it’s really easy to manipulate the weather – especially for an ex-surfer turned shark hunter.

Just what I wanted – another overload of crap CGI effects!

Thunder Levin’s unimaginative script (which is essentially a re-do of the exact scenario as featured in the first Sharknado with a few different characters and a different setting) has precisely no connection with reality, common sense, or basic logic. His characters act in a manner that’s completely irrational and the entire story in this film exists in the moment. Let’s get this out of the way now: I KNOW THIS FILM WASN’T MEANT TO BE TAKEN SERIOUSLY, but I would have hoped that some level of consistency or continuity would exist in the script. As it plays, this film may as well have been written by Leonard from the movie Memento since events in the story are forgotten as soon as they happen with little consequence. This style of supposed storytelling would be fine and dandy for the ADD crowd a film like this is designed for in the first place, but the lack of flow would makes the film problematic for a viewer who’s accustomed to, I don’t know, good movies. There’s no rhyme or reason to the construction of scenes or the film in general, and Ferrante’s direction seems geared solely towards creating ridiculous individual moments, like having the head of the Statue of Liberty roll through Manhattan for what seems like an eternity. Since we’re basically seeing the same story from the first film redone, there’s an extreme sense of predictability to the developing plot which ruins any sense of suspense during key scenes. I also have to say that for a writer and director so clearly proud of themselves for coming up with the novel idea of making a film about a tornado filled with snapping sharks, it’s astounding how little originality or cleverness exists in Sharknado 2. From both a script and film composition standpoint, this is a hodgepodge of elements taken from other, better films – the Sharknado series in general reminds me of something Uwe Boll might have made and that’s not a recommendation. Also, what’s up with the in-movie advertising for Subway restaurants?

Sharks on the subway, sharks in the sewer, sharks on top of the Empire State Building…

It’s actually worrying that a film like this would be acclaimed by so many people or, frankly, anybody: the competency level of the crew who made this film is quite obviously devastatingly low. The filmmakers also seem to have been trained by watching reality TV: the blatantly unnecessary “dramatic” segments in this film (such as when Fin and April have little heart to hearts and discuss getting back together after their divorce) are not only hopelessly shallow but absolutely horrifying to watch. The script, with its reliance on cliché after cliché, is bad enough and chock full of atrocious lines of dialogue, but having to watch Ziering and Reid act out preposterous emotional situations is enough to really send a viewer over the edge. Levin’s script doesn’t stop there however: due to his “overwhelming cleverness,” he rips off other films left and right – going so far as to name Fin’s brother in law “Martin Brody,” his sister “Ellen,” and their son “Vaughn” after characters from Jaws. Subtlety is apparently not Mr. Levin’s strong point, although some of the “homages” are more disguised – mostly due to the fact that the target audience simply wouldn’t “get” the references. How many of today’s teens, for instance, would recognize the scene clearly stolen from Dr. Strangelove? 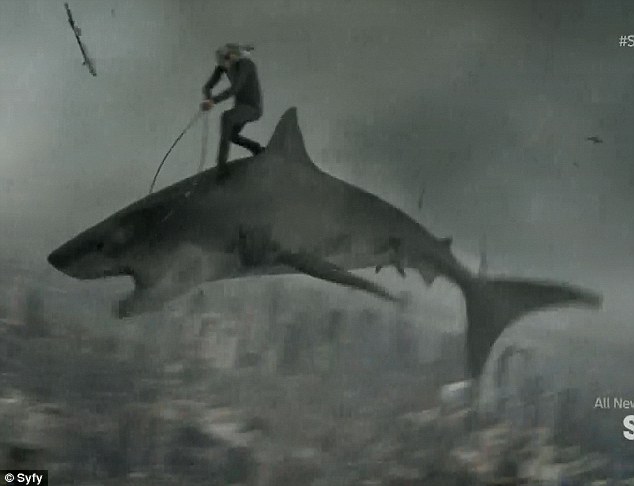 This film perhaps works best as a “spot the celebrity” sort of venture since there’s a laundry list of recognizable faces who make cameo appearances, from tabloid journalist Perez Hilton to wrestler Kurt Angle, comedian/actor Andy Dick to musician Billy Ray Cyrus. Perhaps the most glaring of the celebrity appearances are turned in by news anchor Matt Lauer and weatherman Al Roker, who provide a sort of Greek Chorus in the film, keeping an audience up to date on the development of the storm system. Minor characters in the story fare little better than the agreeable but blah Ziering and utterly terrible Reid. Musician Mark McGrath alternates between being overly enthusiastic and pretty dull as Fin’s brother in law, Vivica A. Fox plays the stereotypical sassy black woman, and skinflick queen Kari Wuhrer is Fin’s sister (sadly, Wuhrer doesn’t so much as come close to disrobing). None of these actors really impress, though I’d have to guess that this script didn’t exactly hand them winning material. Nor would bravura acting much have mattered in a film of this nature.

It’s immediate clear that the entirety of Sharknado 2 was constructed for the enjoyment of the social media crowd and for the purpose of creating instant buzz : any other possible concern simply isn’t one in this mind-bogglingly stupid “film”. Knowing that, imagine my surprise when this flick actually was entertaining and enjoyable to watch – to an extent. Let me clarify that statement by saying that this is in no way shape or form a “good movie,” and in fact, it may be one of the most ill-conceived and poorly handled films one could imagine. The overwhelming CGI effects are pretty shoddy, and when the film takes place during baseball season and presumably during the summer months, then has snow on the ground during several shots, it’s a sign to me that this project was hastily produced with minimal prep time – par for the course in this type of made-for-video/cable trash. Still, though it is undeniably, positively RETARDED in doing so, Sharknado 2 kept my attention mostly because it doesn’t slow down for nothing, no how. NOTHING makes sense in this film, a viewer is forced to either accept the wonky logic and enjoy the ride or turn the damn thing off. I chose to stick through and, despite the fact that I probably killed brain cells, I did find Sharknado 2 more worthwhile, watchable, and dare I say fun than the unsalvageable and listless first film. Those in the ADD generation who thought the first film was the “BEST. MOVIE. EVER.” will undoubtedly enjoy this bigger, louder, “dumberer” sequel even more, and although I wouldn’t in good conscience recommend this film to anyone, if you must see one of the two (so far…) Sharknado movies, this would be the one to catch.

1/10 : Some rough language and minor profanity, but fairly clean. I was more appalled and offended by the soul-crushing, incredibly stupid dialogue.

0/10 : Hard to believe there’s so little action in a movie that features fap classic actress Kari Wuhrer in a major role.

10/10 : Completely nuts; watching this film is like stumbling drunk through a pop culture nightmare. With killer sharks.

Cliche-riddled climactic speech: “I know your scared. I’m scared too. They’re sharks. They’re scary. No one wants to get eaten. But I’ve been eaten. And I’m here to tell you it takes a lot more than that to bring a good man down.”