A SATISFYING RPG ADVENTURE FOR THE NES – ROBIN HOOD:PRINCE OF THIEVES

ROBIN HOOD: PRINCE OF THIEVES for the Nintendo Entertainment System 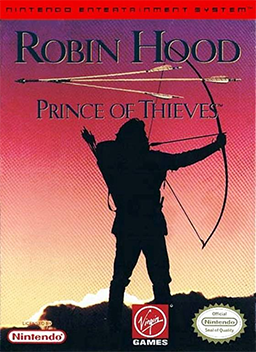 Cons: A few issues relating to gameplay; not especially difficult

Released in 1991 by Virgin Games and based on the film of the same name, Robin Hood: Prince of Thieves is a pretty nifty combination of adventure and role-playing game (or RPG) set in medieval England. The player controls the titular character (a.k.a Robin of Locksley) as he first escapes from an Arab prison, then assembles a gang of outlaws in an attempt to wrestle the grip of power away from the nefarious Sheriff of Nottingham. Throughout the game, a player builds up his stats by killing enemies and gaining experience points, and there’s a pretty ingenious (if somewhat simplistic) status screen that allows a player to use, equip, and examine various items discovered during the course of the scenario. Even if its not quite on par with the best NES RPG titles like Final Fantasy, Destiny of an Emperor (yeah I said it), or The Legend of Zelda, Robin Hood easily takes a place in the second-tier with games like Willow.

One of the best things about the game is its variety: though obviously held back a bit by the NES technology of the time, this game includes several unique sections of gameplay. The majority of the game, seen in overhead view, has the player free-roaming in the English countryside, battling enemies, performing various tasks, and venturing to different locations. At various points throughout the story, the gameplay switches to a melee battle which pits Robin and his party (one to four additional characters are gradually encountered and recruited as the game progresses) against swarms of enemies. Seen in an extreme overhead view, these sequences provide a larger-scale, slightly more strategic combat mode. Additionally, there’s also a side-scrolling mode in which the player finds himself squaring off one-on-one against an enemy in a duel, and a couple of action modes where the player must escape from oncoming enemies on horseback. All in all, the game offers up a nice assortment of sequences to ensure that it never gets boring.

All the major, familiar characters seen in the legend of Robin Hood (and in the 1991 film adaptation of the story) are featured in the game (though most don’t serve all that much of a purpose), and to an extent, the game follows the plotline of the film fairly closely. Once the game gets to a certain point in establishing the main characters and giving Robin control of his band of “Merry Men” however, the Prince of Thieves game starts to veer off from the movie and has the player embark on a series of what I would label “side quests.” These quests involve such tasks as hunting and killing a wild boar, stopping a wedding in which the bride was kidnapped by an evil baron, acquiring the services of a weapons trainer, and even seeking a mystical lake inhabited by monsters. It’s pretty clear that this sequence of tasks was thrown in to prolong the length of the game, but I found most of these missions to be rather enjoyable in their own right. There is plenty of room to explore in this game, and it really pays to roam around in search of hidden items. A player must be somewhat selective with the items he picks up however – each member of his party only has room to carry a specific number of items, thus unneeded ones should be discarded as soon as possible to make room for health power-ups and additional, more powerful weapons and armor.

Status screen is a bit difficult to figure out, but allows various items to be equipped and/or used.

I thought that this game overall was of a good length: it probably would take a bit longer to get through this story than the one seen in Star Trek: 25th Anniversary, but the gameplay in Robin Hood is less about solving puzzles and more about the acquisition of new items and equipment and simply defeating enemies. To that end, the game does offer some challenges: it’s possible to be sort of “called out” during battle sequences, trapped in a corner surrounded by enemies who will rapidly deplete the player’s level of health. The melee battles could possibly present the most challenge, since there’s often an enemy shooting arrows around which will quickly wipe out the player and his party if they are not avoided. All that said, perhaps one of the more disappointing aspects of this game is that it’s not especially difficult to get through. Enemies are generally very weak, and even the duel sequences are ridiculously easy once a player figures out how to exploit gameplay mechanics to his advantage. In most duels, it’s possible to “trap” the enemy in a position where he can’t strike back, making for a one-sided battle – the inevitable final showdown with the Sheriff, for instance, is almost a joke. 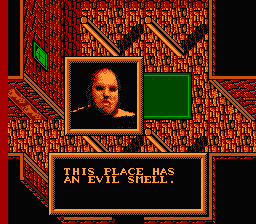 As fun as this game is to play though (and really it is – I’d declare it to be among the best NES games based on movies), it has some issues. First, it’s incredibly frustrating to navigate certain locations found in the game. The playable character has a tendency to bump into most any obstacle that’s around him: trees, bushes, stones, whatever. There are certain screens where the biggest challenge will simply be to move around and/or through the terrain and a player will very quickly become tired of getting “hung up” on one thing or another – and of the “knocking” sound effect that’s heard whenever this happens. The interface for equipping and using items is kind of awkward and can be difficult to figure out and utilize – some items must be “used” from this screen, placed on various parts of the body, or even eaten to have effect. Honestly, one will find himself experimenting more often than not to figure out which item does what and how.

Though the graphics here are top-notch for the NES-era, it’s somewhat confusing that some of the portraits used to represent various characters appear to have been swapped – the image of Kevin Costner (who played Robin in the movie) is used to represent the minor character of Peter in the game, while the avatar of Alan Rickman (who played the sheriff in the film) is used for Guy of Gisbourne in the game. I should also point out that there’s a specific item in this game that ABSOLUTELY CAN NOT be given to one particular member of Robin’s party. Since there’s nothing that warns a player about this, it’s INCREDIBLY FRUSTRATING to play through to a point just before the end of the game only to realize that further progress is impossible and the game is unwinnable. In my opinion, there should be some prompt in the game that prevents a player from essentially losing the game through no fault of his own, but in the NES era, this apparently wasn’t a priority. Finally, perhaps the game’s biggest outright flaw is the fact that there’s no password or “save” functionality with this cartridge. The game does have a sort of “warp” functionality that’s well-documented today (not so much back in 1991), but to say that it’s imperfect is giving the game a compliment it doesn’t deserve. “Warping” starts the player off at a specific sequence in the game at a low status level and with a bare minimum of items, making the process of completing the game increasingly difficult. One is much, MUCH better off starting from the beginning to ensure that he not only levels up properly, but acquires items that are almost necessary down the stretch. 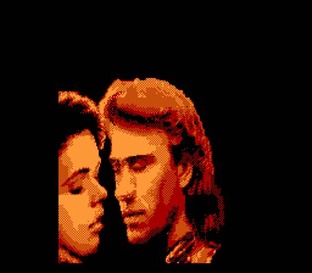 Despite the problems though (and honestly, NES games are all about perspective and compromise since very few of them even come close to perfection), I’d call Robin Hood: Prince of Thieves one of the best, most underrated second-tier titles for the NES. It’d be difficult to label this game a outright classic, but it nonetheless was one of my favorite games around the time it came out, and it still holds up pretty well today. Music here is pretty catchy and feels appropriate given the situations in the game, and the graphics are very good for the time in which this title was developed. There’s a lot to do and much to explore during the course of the game, and it does a nice job of taking the plot of the movie and expanding it while still remaining pretty faithful to the source material. As was the case in many of the lesser NES role-playing games, Robin Hood: Prince of Thieves doesn’t have a ton of replay value, but I think this game is quite fun for what it is. It’s definitely worth a playthrough for those who enjoy role-playing or adventure games of the NES era.