THE COLD WAR: THE VIDEO GAME – CONFLICT FOR THE NES

CONFLICT for the Nintendo Entertainment System

Cons: Difficulty level is off the chart

Using the same hex-grid based battle system that featured in most of the Koei games of the NES era, Conflict (released in early 1990 and developed by the Vic Tokai corporation) plays sort of like Genghis Khan lite. This is strictly a military simulator, but as such it’s fairly complicated – and almost insanely difficult. Though this is a two player game, in the one-player option, the player assumes the role of a military commander in charge of a large (ostensibly American) “blue” military force who has gone to war with a unanimously superior (and apparently Russian) “red” computer-controlled enemy. At the start of each game, a player chooses from one of sixteen unique scenarios (the last of which ends the “campaign” so to speak), each of which offers up a different map and varying amounts and types of military units. Through the course of the chosen individual combat scenario (which operate in a turn-based manner and last until one side claims victory by defeating the enemy’s flag tank, a sort of command unit), a player must maneuver their units around various types of terrain and locations on the map, engage enemy forces in firefights, instruct factories on what new military units to build, and manage supplies else fuel and ammo will run out.

Main map screen, showing an accumulation of Red Forces (and their two factories at the upper right).

Seemingly set around the time period the game was released, Conflict features modern military units: aerial units like fighters, bombers and helicopters as well as ground units like tanks, anti-aircraft guns, and commandos. Each of these units fares best against certain types of enemy units, but is extremely vulnerable to the attack of other types of enemy units, thus managing unit movements and location is a key element to the game. Once two opposing units come into contact with one another on the map, a turn-based battle scene can be initiated. During this sequence, both sides of the battle have a chance to either attack the enemy, make defensive maneuvers, or attempt to retreat. None of these tactics are guaranteed to be effective: one of the game’s biggest problems is that a single technique that works one time won’t be at all effective the next, making the battle sequences play out in the manner of a crap shoot with regard to determining a course of action. All units have a set number of “hit points” which are depleted as they take damage during the battle. Battles in the game are fairly true to life – infantry, for instance, fare none to well against most units and can be blown to smithereens by aerial attacks – but every once in a while, it’s possible to pull out something miraculous. Especially if you’re the computer. 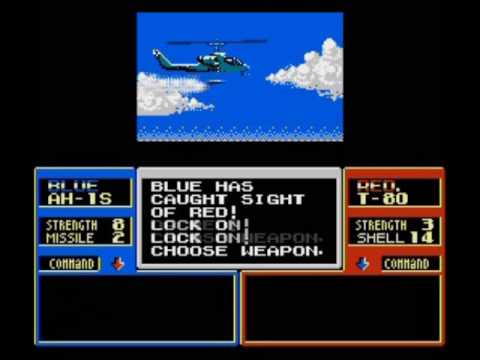 The battle interface: commands are chosen, and this helicopter is preparing to fire.

Obviously, the goal of the game is to wipe out the enemy forces, and though that is the way one “wins” the game, getting to that point isn’t as straight-forward as might be thought. Each side in the game starts with a number of “fame points” or “victory points” if you like. Fame points are a sort of measure to indicate what level of new military units factories can construct – higher numbers of points means the best units can be built regularly. Typically, the player starts with 5000 points, while the computer begins with 10,000 and from that fact alone, it’s possible to see how the odds are stacked against a human player in this game – he’s WAY behind the eight ball right from the word go. Points are rather difficult to accumulate – the number a player has is based on the number of cities and airfields he controls, and there are also bonus points awarded if he defeats an enemy unit. Conversely though, a higher number of points is deducted from the points total of the loser of every confrontation and this fact is critical. Defeat enough enemy units and the computer simply won’t be able to replenish its force – but lose too many of your own fame points and it’ll be all but impossible to win the game.

It’s imperative to not only protect the factories, but also to manufacture items needed to further the military campaign.

Though it’s fairly straight-forward to play and easy to get the basic hang of, Conflict may be one of the most frustrating and difficult titles for the NES ever – and yes, I realize the implications of that statement. There are many reasons for this, not the least of which is that the computer (in the one player game) starts out with a ridiculous advantage over the human player (the level of this advantage only intensifies when a higher difficulty level is selected; personally, I can’t imagine the one-sided mess that playing this game on the hardest difficulty would be). Immediately, the computer can begin construction of advanced bombers and fighter jets while the player has to throw all hope into building enough of a defensive force to repel at least some of the enemy’s attacks. Combine the superior firepower with the fact that the computer seems able to best utilize tactics that simply don’t seem to work as well when a player is attempting them and Conflict turns into a game that’s not only incredibly challenging, but also a sort of litmus test that would reveal a player’s tolerance for frustration and hardship. I have to imagine this was one of the original NES games most likely to prompt its player to fling the controller at the TV screen in disgust. Finally, one more potentially infuriating element to the game is that there’s no in-game status report that reveals any single unit’s level of fuel, ammo, or hit points. Thus, it’s possible that a unit will simply be stranded when it runs out of fuel – considering how difficult it is to construct some of these units in the first place, it seems completely unacceptable that there’s no way to determine the fuel levels, and plunging into battle with a woefully under-equipped unit is equally irritating. 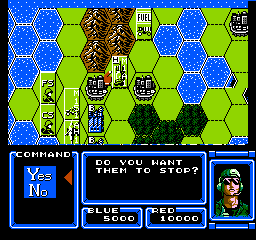 Note the “victory point” numbers at the bottom of the screen: The human player starts at a huge disadvantage and has to quickly assemble some semblance of defense against a superior enemy.

I picked this game up many years ago when a local video shop was unloading its NES titles and the game positively drove me nuts for years. With enough playing time, a player will learn how to exploit the game’s mechanics to an extent. Air units distract the computer easily and can be used to set traps, but the best advice I could give would be to build LOTS of quality anti-aircraft units since the computer is likely to overwhelm the player with fighters and bombers. Still, there’s nothing and I mean nothing in this game that can entirely make up for simply having good luck with regard to how the game plays out – a shame considering this is a strategy game where one would hope that tactics would make up for unfortunate happenstance. Sadly, this is quite obviously not the case. Literally, one could play this game almost flawlessly but through luck of the draw get absolutely hammered into oblivion by a computer opponent that seems to perfectly execute moves that are nearly (if not completely) impossible for the player to pull off.

Cities can be used to supply and reequip units, and a player also gets victory points each turn based on how many cities and airfields are under his control.

Graphically speaking, Conflict is good but not great: the map screens that make up the majority of the game get the job done but aren’t especially colorful or detailed. Battle scenes are a little better, featuring decent animation and a fairly accomplished level of detail in showing the various units. Given that much of the game is menu driven, control issues aren’t really a problem, but the sound is extremely monotonous even if the tunes heard in the game aren’t bad in and of themselves. Both the main map screens and battle sequences have their own music, but a player rapidly would become sick of these tunes and their continuous repetition. This is one of those titles where some background music of one’s own choosing would go a long way. There are some sound effect accents occasionally thrown in to spice things up a bit, but the “end game” screen (particularly the incredibly lame, text-based one that comes up should a player win the final scenario) is hugely disappointing considering the amount of time that would have been invested – and the level of frustration that’s inevitable in trying to reach that point.

Title screen is about as good as the graphics get here, but the gameplay itself makes up for this shortcoming.

As outrageously difficult as Conflict is though, I actually appreciate the challenge this game offers today – though this wasn’t at all the case when I first got the game. In an era where many games seem to “play down” to a community of players used to having their way in the world of gaming, here’s a title where most (and I would suspect, even the best) players will not only have to up their game considerably in order to even remotely compete, but will also regularly get their ass handed to them by a computer opponent who seems almost invincible at times. Many people won’t like this game simply because of how hard it is to master and indeed win, but it’d be a stretch to call this a bad game in any respect. It’s not as all-encompassing as the truly outstanding Koei games for the NES (which are, in my opinion, the gold standard of NES strategy titles), but the well-executed and fairly intricate Conflict is surprisingly enjoyable – provided a player is OK with handling failure. If nothing else, this game certainly tests a player’s mettle.