FORMULAIC BUT WHACKED-OUT BRITISH FANTASY: AT THE EARTH’S CORE

AT THE EARTH’S CORE 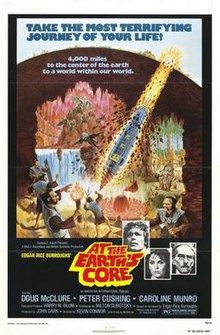 The middle film in a trio of British adventure fantasy films of the mid-to-late 1970s based on works by Tarzan novelist Edgar Rice Burroughs (the other two films in the trilogy were 1975’s and 1977’s ), 1976’s At the Earth’s Core had every potential to the best of the bunch. This film, set in 19th century England, follows the adventure experienced by British professor Dr. Abner Perry and his American financier David Innes after a device they’ve built doesn’t exactly perform to plan. Their contraption, the “Iron Mole,” is basically a huge drill that the pair have devised to be able to tunnel through mountains, but during a test run, with the pair of designers at the controls, the Mole heads straight for the center of the earth. Upon exploring the large, cavernous space that exists near the earth’s core, Perry and Innes discover a race of humans being enslaved by ape-like beings who are controlled telepathically by a race of large, reptilian birds. This just in: At the Earth’s Core is CUCKOO FOR COCOA PUFFS! As might be expected given the scenario, the burly Innes takes it upon himself to try and free the enslaved people from their captors – especially after he falls in love with Dia, the (apparently) only female around.

The script written by Milton Subotsky doesn’t offer up much in the ways of surprises: At the Earth’s Core borrows rather liberally from any number of vaguely similar fantasy and science fiction films. Subotsky’s story is perhaps most indebted to the original, George Pal-directed version of The Time Machine, which also deals with a race of humans being enslaved by a beast-like species, and builds to an inevitable conclusion where the subordinates rebel against their captors. Most of the characters here are woefully stereotypical – the wimpy professor spends most of the movie prattling on with observational mumbo jumbo that I guess is designed to be funny, but simply isn’t. This supposed “comic relief” is possibly the film’s worst element; it quickly grows tiresome. Meanwhile, Dia is revealed to be (what else) a princess, and has been propositioned by the biggest and baddest dude around, leading to the obligatory “let’s fight it out for the woman’s affection” scene that, of course, works out exactly as expected. Even if a viewer is well aware of what will eventually happen in Subotsky’s script however, the production as a whole (directed by Kevin Connor, who also handled both The Land and People That Time Forgot as well as such films as the dementedly enjoyable 1980 horror effort Motel Hell) is most impressive and features some astonishing, imaginative details.

It’s OK, Doug – one look at that sweaty cleavage would probably make me batty too.

Set design throughout this film is remarkable: though this modestly-budgeted film clearly didn’t have the resources of the typical Hollywood production of the time, a viewer might not notice since the art department truly outdid themselves in terms of creating some awe-inspiring sets. Especially nifty were the jungle locations that are full of colorful, exotic-looking vegetation, but I also thought the appropriately grim and dreary cave sets in which most of the story takes place were well-done. Keep an eye out for the “fire curtain,” a sort of waterfall made of flaming lava – one of many really cool visuals in the film. Alan Hume was the cinematographer here, and he magnificently utilizes lighting technique to get the most out of every shot. Many sequences here are relatively dark, but when color intrudes in the film, it’s quite extraordinary to look at – and listen to thanks to the slick electronic music soundtrack by (former Manfred Mann guitarist) Mike Vickers. The entire production has a great sense of scale, which again makes this film look a lot “bigger” than the typical low-budget production of the day.

Slaves – nutritious and delicious; they taste just like chicken.

I found the acting in this film to be a bit on the strange side, mostly due to the casting. Doug McClure (who had major roles in both of the other Burroughs film adaptations) as the obvious hero Innes once again proves he can’t act to save his skin: his main job throughout the film seems to be to lumber around, barking the occasional order to those around him. He’s believable enough as a brutish sort of character, but if it were up to him, the film wouldn’t be all that compelling. The great Peter Cushing stars in a role completely different from what I’m used to seeing him play as the bumbling professor Perry. Cushing (looking quite gaunt and crotchety) effectively comes across as an oblivious, nerdy weakling, but the humorous nature of his character however never quite seems to jive with the rest of the film. The comedic value of the Perry character seems forced, actually taking away from the effectiveness of the picture as a while. In the other major role we have jaw-droppingly gorgeous Caroline Munro (former model; ) as Dia. This character is mainly the obvious damsel in distress and isn’t given a whole lot to do, but I could watch Munro (and her prominent, pushed-up cleavage) all day long. It’s worth noting that the ending of this film offers up perhaps the only surprise in a film that relies (perhaps too heavily) on convention – don’t necessarily expect everyone to live “happily ever after.” 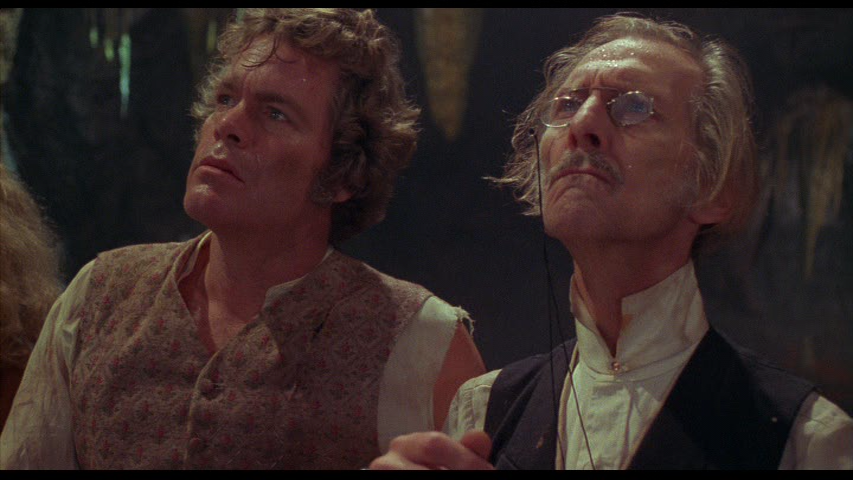 Cushing and McClure ponder their next move.

Without a doubt, the most amusing aspect of this film for me was the special effects work that not only creates some of the most goofy rubber monsters I’ve ever seen in a feature film, but also goes nuts with the pyrotechnics late in the going – could this film then be a dry run at the orgy of destruction that went down during the conclusion of The People That Time Forgot? Any way one looks at it, At the Earth’s Core is hokey to the extreme and the creatures in this film resemble what the results would be of going to the zoo in the midst of an acid trip – a Godzilla-like creature with a parrot beak, a pair of upright-standing, smoke-snorting warthog/horse hybrids engaged in a battle to the death, a hippopotamus-lizard combination, a fire-breathing frog, and a group of large, telepathic, crow-like birds that can command humans with just a blink of their glazed over, emerald-colored eyes. All these beasts are quite obviously men in suits, but watching this oddball assortment of monsters paraded around onscreen drove me into fits of laughter on multiple occasions.

Director Connor injects a ton of energy into this film during its opening half: it clips along at an incredible pace, ensuring that a viewer doesn’t even notice that the film is not only completely illogical from a scientific standpoint but also extremely dumb. It’s only around the midway point when the pacing of the film grinds to a halt that a viewer starts to realize that he’s seen this story before. The film never becomes boring by a longshot – the parade of outrageous, “what just happened” moments continues throughout – but I really wish it could have maintained its momentum. Even if the picture does lose its vitality down the stretch (and don’t we all…), At the Earth’s Core winds up being almost on par with the completely bonkers third film in the Edgar Rice Burroughs trilogy as a thoroughly entertaining “bad movie.” Many viewers would simply write this film off on account of its absurdity (none of the three British-produced Burroughs film adaptations produced in the 1970s are “good” by conventional standards), but these viewers would be missing out on a fun way to spend an hour and a half. Leave your thinking cap behind and you’re likely to get a kick out of this flick.

Out of print, stand-alone disc from MGM (on the “Midnite Movies” imprint) is widescreen with no special features, but why wouldn’t you just get the four-movie collection which also is the same format and also includes the features The Phantom from 10,000 Leagues, The Beast with 1,000,000 Eyes!, and War Gods of the Deep?

3/10: Typical fantasy movie violence: a few monster attacks, a few fight scenes, brief gore. Sometimes the action is rather chaotic, but this is never especially brutal.

2/10 : Munro looks fantastic in as little clothes as possible, but there’s no sex and no nudity aside from some “side boob.”

KNOW YOUR ENEMY: “The Mahar is limited vocally but has been endowed with mesmeric powers and a high degree of telepathy. Hmm. That’s quite the combination for a bird. ”

“I Have a Firm Grip Upon Your Trousers, David…”