SEX IN THE WILD on PBS 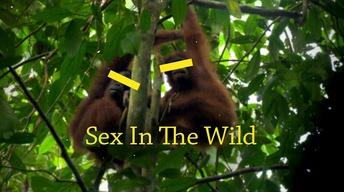 Cons: I’m sure some people would find this show “distasteful”

Though the channel has long been associated with straight-forward documentaries, chipper childrens programming, and stuffy British dramas, PBS’s newest show suggests that the venerable public television channel might be making an attempt to gain more viewership through including more “salacious” programming. Wednesday night’s Sex in the Wild follows comparative anatomist Joy Reidenberg and veterinarian Mark Evans (fresh from National Geographic’s Bigfoot: The New Evidence documentary) as they uncover the rarely-discussed reproductive habits of various animals in rather explicit detail. Obviously, studies of animal mating behavior have figured into many nature documentaries over the years, but this show focuses all of its attention on the subject to the point where the program includes a warning to viewers that it contains “detailed scenes of animal mating and reproductive studies.” In the end, though it’s possible that Sex in the Wild would elicit snickers from the more immature viewers out there (but, they don’t watch PBS in the first place, do they?), I’d have to call this program an outstanding, eye-opening, and refreshingly frank examination of a subject that (let’s face it) is rather fascinating. 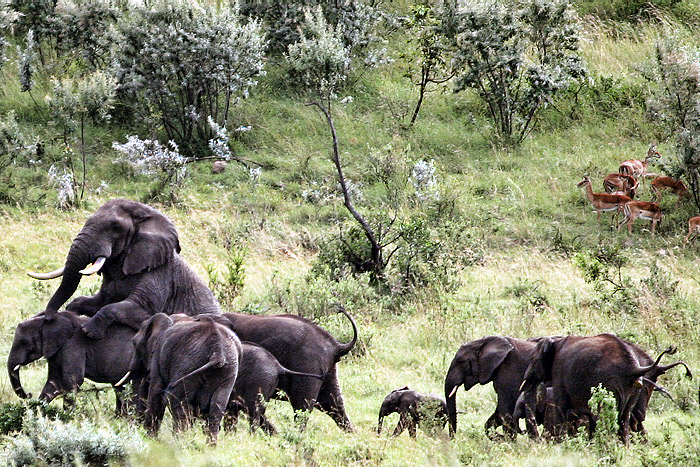 “Hurry along kids…nothing to see here…”

Episode one of the series premiered on July 16, 2014 and dealt with a study of African elephants. Alternately filmed in the nations of South Africa and Botswana, this episode saw Reidenberg explain the mating and birthing process of the large mammals while Evans chronicled the efforts of a South African team to chemically sterilize bull elephants in order to control populations (contrary to popular belief, in some nature reserves, elephant populations have grown to the point of being unsustainable). Throughout the course of the episode, a viewer not only learns about the unique challenges involved when large creatures weighing several tons a piece attempt to mate, but also find out why the elephant has the longest gestation period of any mammal on earth at around 22 months(!).

This premiere episode includes some rather compelling scenes and a plethora of compelling and intriguing information. Shocking though it is to see the “rodeo ride” that’s in store for Evans as he prepares to extract a semen sample from “one of the most impressive reproductive organs on the planet,” it’s revealed that the elephant’s massive penis has the ability to move completely independently of the pelvis due to the female elephant’s rather odd but absolutely practical anatomical structure. A 200 pound elephant calf would be injured if it had to drop from tail-level to the ground as it was born, thus the male penis more or less has to “feel” its way around the lengthy, curved birth canal during mating. Perhaps more conventionally remarkable is a scene showing the birth of a elephant calf which gives the viewer a sense of why elephants have a nearly two year gestation period. Within ten minutes of being born, newborn elephants have gained a startling level of control over their nervous system, and are able to stand up and even run. This is a necessity considering how utterly helpless newborn elephants are – they’re extremely vulnerable to predation in the wilds of the African savanna and desert. I also found the depiction of elephant social behavior to be heart-warming: turns out that Dumbo wasn’t far off-base in detailing a mother elephant’s love for her newborn. Hosts of the show Reidenberg and Evans; while Reidenberg gets to play with cute newborn animals, Evans has to manually extract elephant sperm…

Remember those trips to the zoo as a kid when the chaperones would try and brush children past animals that were getting a little too “frisky?”  The best thing about Sex in the Wild in my opinion is that it doesn’t try and brush past or “dumb down” its subject in an effort to make the program more digestible for potentially sensitive viewers: sex is, after all, a natural process and one that is absolutely vital to any living species. As might be expected from a PBS program, Sex in the Wild is generally pretty sober and is put together extremely well – even if it does (perhaps inevitably) have a few “look and point” or “EWW!” moments. This initial episode made nice use of footage recorded under controlled situations (i.e. with elephants that were held in semi-captivity) as well as scenes showing elephants roaming freely in the wild, and a variety of camera techniques (including aerial shots and infrared cameras) were used to record the action. Editing during the documentary was slickly executed with the narration provided by Reidenberg and Evans explaining what we’re seeing onscreen quite well. I also thought the ponderous music score fit the mood of the program perfectly.

Coming soon to a PBS station near you: ROMEO and JULIET as played by kangaroos…

I suppose it goes without say that this program would not be appropriate for or to the taste of some viewers; it may be the most obviously potentially objectionable program on PBS – but is it really that awful in the bigger scheme of things? Sex in the Wild (which will have a four-episode run this summer – orangutans, kangaroos, and dolphins being the other topics – with future episodes to be decided upon later) certainly has a few moments that might make some people uncomfortable, but I think the educational value of the program makes it more than just a show to gawk at. Ending on a bit of a bittersweet note, this first episode definitely held my interest throughout its hour-long run time and presented a wealth of information that I would not otherwise have known. If nothing else, this program proves that even as most “educational” channels continue to cop out with lowbrow reality television, PBS’s lineup of new programs and established staples (Nova, History Detectives, and Frontline are outstanding) remains as strong as ever.

FULL EPISODES CAN BE VIEWED .