NIFTY TACTICAL SIMULATION FOR THE NES – RESCUE: THE EMBASSY MISSION

RESCUE: THE EMBASSY MISSION for the Nintendo Entertainment System

Pros: Nothing if not unique; fun to play; polished gameplay

Eleven days ago, the embassy of an unnamed country was taken over by terrori…er…fanatics (Nintendo – always keen to avoid potentially sensitive subjects in their games…) who are holding the entire staff hostage. Now, after diplomatic negotiations have failed, a “crack” team of commandos has been sent in to alleviate the situation – by blowing the maniacal hostage-takers away with extreme prejudice…

That’s the basic scenario for 1988’s Rescue: The Embassy Mission, a game released by Kemco-Seika for the NES based on the computer game Hostages. Released a decade before the first of Tom Clancy’s Rainbow Six games blew away players with its realistic tactical simulation, Rescue may be one of the shortest NES games around: it sits in a category by itself with games like Jaws and Chiller as one that can be completed in a couple minutes. Still, it’s pretty doggone clever by the standards of the time and I’d definitely say that it’s worth checking out. 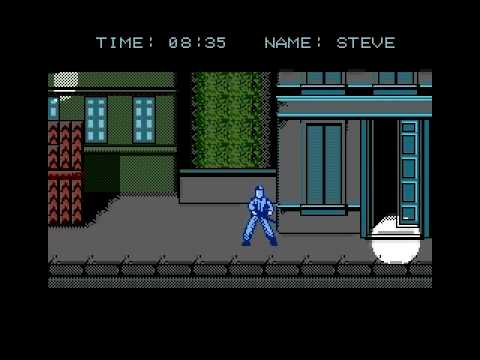 Steve on the street, trying to avoid enemy spotlights and gunfire.

The game starts off with a few simple animations reinforcing the basic story before a player hits the main stage select screen. Though there are numerous options here, the game is the same no matter what is selected: the various options mainly act as a difficulty level selector. Higher difficulty levels means less time to complete the mission, more complex enemy AI to deal with, and a building map that hides locations of terrorists and hostages, meaning that a player has to stay on his toes during the final building sweep. Once the difficulty is selected, Rescue heads into its first gameplay section. In this initial section, a player must maneuver a trio of snipers into position around the embassy building. Unfortunately, traversing the streets surrounding the building puts the snipers at risk of being shot at by the terrorists, who have searchlights combing the area. The three snipers (named Mike, Steve, and Jumbo) have to duck, cover, roll, and shuffle past the searchlights while avoiding the automatic weapons fire coming in their direction. Basically, at least one of these snipers has to make his way to his predetermined sniping position in order for the game to continue – and it’s highly likely that not all of them will make it. The third sniper literally has to walk down three city blocks – which is more or less a suicide mission in terms of how this game operates.

Nerves of steel are required during the sniper sequence.

Once all three of the snipers have been controlled and at least one has successfully made it into his sniping position, the second game phase begins, wherein the sniper(s) can strafe the windows of the embassy building in an attempt to thin the ranks of the terrorists. This is accomplished during a pretty nifty sequence where the player looks down the sight of a high-powered rifle and takes pot shots at shadows in the windows of the building. When this task has been completed in a satisfactory manner, it’s time for the final assault on the building, in which the commando team of characters Ron, Dick, and Kemco (…and on that day, the program team simply ran out of ideas…) join the action. After the player selects one of these mobile commandos, he next has to rappel down the building, then crash through one of the windows and make a room-to-room sweep through the building, wiping out terrorists and rescuing the hostages as he goes along. This is more or less just a “shoot anything that moves” sequence – though it’s possible to not only blow away the bad guys but injure the hostages as well. How effectively the player completes the scenario determines which of several different endings pop up upon the completion of the building sweep: injuring hostages or having commandos killed will lead to an less-than-ideal end screen.

On the assault through the embassy building.

Probably the single best thing about this game is that it is entirely unique for the time in which it came out. Kemco-Seika released quite a few well-regarded but quirky games during the NES years: the company was responsible for the trio of Shadowgate, Deja Vu, and The Uninvited, point-and-click strategy games which are still among my absolute favorite NES titles, and also released such things as the Civil War game North and South, the goofy and complicated action title Rocket Ranger, and the in-depth WWII military simulation Desert Commander. Back in the 1990s, I remember being fascinated by Rescue simply due to the fact that there was no other game that offered this type of scenario – it’s pretty darn realistic for 1988 (remember – it would be ten years before Rainbow Six would come out) and though the game is fairly simple, it does require a degree of both strategy and skill to get through the game with all the commandos still kicking.

So much for that safety gear…

Graphically speaking, this game is surprisingly decent: obviously, it doesn’t hold up today, but compared to other games released around the same time, Rescue looks sharp. It’s also worth pointing out that this is among the few NES games where a player actually kills people – and there is some onscreen gore when terrorists (or hostages for that matter) are shot during the room-to-room assault. Music during the game is pretty catchy and appropriate in tone, if somewhat minimal. There is a pounding opening title theme, a slightly mysterious tune playing during the scene where a player positions his snipers (that kicks up a notch in intensity whenever the enemy spotlights close in for the kill), and a bloopy but somewhat tense theme heard during the final assault. There’s not a ton of replay value in this game, but the varying difficulty settings do allow for some tweaking. Generally, I think this game is fun enough to play once in a while even if it is relatively easy to get through and beat – particularly on the lower difficulty levels.

On the downside here is the simple fact that this game is ridiculously short. The longest time limit setting in which one would have to complete the game is twenty minutes, but literally, it’s quite possible to play through and complete this game in a matter of minutes. Additionally, the process by which a player maneuvers his snipers to their nests along the street level is quite difficult: it’s near impossible to get all three snipers into position safely. The third sniper Jumbo, poor fellow that he is, is almost always shot dead on the street since he has to traverse such an extreme distance to get to his position. On a more perplexing note, I noticed that it’s very rare to achieve the “perfect ending” in this game even if all the commandos and hostages do survive: there appears to be a sort of glitch wherein if the player opens fire in a room housing a hostage, it’s likely that the hostage would be “injured,” leading to a frustrating “DISASTER” end screen message. Of course, I’ve also purposely shot the hostages and still achieved the “perfect” ending, so who knows what’s going on with the logic of this game.

I should also point out that the sniper sequence of this game as a whole seems completely unnecessary; thrown in just to provide some diversity in the gameplay rather than to actually help one’s progress through the scenario. Enemies only occasionally show up in the windows, and even if a player knocks off as many enemies as possible with the sniper (and wastes a lot of time doing so), the in-building assault team will still have to contend with numerous terrorists during their sweep. Gotta admit though that the sniper sequence is pretty damn cool in its design and execution in the game.

All in all, Rescue: The Embassy Mission is a odd little title that’s got some problems and isn’t by any means a masterpiece, yet absolutely is worth playing. The short length of the game is undoubtedly its main fault, but each of the individual sequences in this game are exceedingly well-done and sometimes fairly suspenseful – the game is clearly an example of quality over quantity with regard to the gameplay. I almost wish this game would have led to the production of additional, similar titles – the possibilities for this sort of genre are almost endless, and I’d have to believe that the basic formula demonstrated here would have only improved with time. Rescue might not be a vintage game that I’d go on a wild goose chase for, but if you can pick it up for a couple bucks (and apparently, you can!), I’d definitely recommend it.