YOU’VE HIT SOMETHING! OR IS IT NOTHING? JAWS FOR THE NES

JAWS for the Nintendo Entertainment System

Cons: VERY short gameplay; zero replay value and quite easy once you know what you’re doing

Another in a long line of rather pathetic licensed movie-based games released for the Nintendo Entertainment System, Jaws (published by LJN in 1989) may be one of the shortest (in terms of gameplay) titles released for the system. Loosely based on the basic plot of the abysmal 1987 film Jaws: The Revenge (which should give you a relative idea of what we’re dealing with here), the game takes place in the northern Caribbean, as the player pilots a sailboat around a crude map of Florida, the Keys, and the Bahamas. As the player sails around in overhead view, he will randomly “HIT SOMETHING,” which results in the release of a diver to go into a side-view underwater scene. While underwater, the diver encounters various (apparently deadly) sea life, including rays, jellyfish, and sharks which can be dispatched using the diver’s trusty harpoon gun. The player has an endless supply of spears, so feel free to load the screen with projectiles and listen to the grunting sound that the harpoon gun makes each times it’s fired. Upon killing some of these sea creatures, certain rewards will be revealed: a starfish, for instance, gives instant points to the player’s score, while conch shells recovered underwater act as the in-game currency and can be used to buy power-ups at one of two harbors around the region.

Overhead view seen as the player pilots the sailboat around the map.

Of course, the main goal of the game is to fight and defeat Jaws, the massive shark also cruising around the islands. Occasionally, the creature’s large dorsal fin will break water near the boat, and if the boat and fin make contact, the diver is sent down in an attempt to defeat the shark. This is near impossible in the early stages of the game, which brings us to the exchange of conch shells. It is absolutely imperative that a player exchange conch shells for power level upgrades since that’s the ONLY way that Jaws’ power level (visible on screen at all times) can be lowered. To aid in the acquisition of conch, a “bonus level” shows up every once in a while where the player must bomb jellyfish using an airplane. Yeah, I know; logic isn’t quite this game’s strong point, but for every 3 jellyfish that are destroyed by bombs, one conch shell is awarded. Once a player’s power level reaches at least level three (higher levels are better), it becomes possible through repeat attacks to lower Jaws’ power level to zero. At this point, the game enters its “final battle” sequence. In this “first person perspective” scene, the player must wait until Jaws (who is swimming around ferociously back and forth onscreen) is positioned correctly in front of the player’s boat, at which point a strobe is used to make him jump out of the water. Finally, the player must ram the shark’s underbelly with the pointed front end of the ship to put an end his (more annoying than threatening) rampage. The player is given a finite number of strobes; failing to kill Jaws during this sequence results more or less in the whole process of lowering Jaws’ power level having to be repeated from the beginning.

Par for the course in NES games, the undersea levels get more difficult as the game progresses. While jellyfish bubble up from the bottom of the screen and rays go horizontally across it throughout the game, in later stages, the jellies can move diagonally and “hunt down” the diver, creating a frequently hairy situation to try and play through. When Jaws shows up onscreen at precisely the wrong moment, the results can be pretty catastrophic for the player, who now must deal with a huge, hungry shark tracking his every movement along with the jellies, rays, and small sharks. All that said, this game is ridiculously easy once one gets the hang of it – and it’s almost absurdly short. It’s very possible (and relatively easy) to beat this game in all of about five minutes of playing time – a huge contrast to the near-impossible Friday the 13th movie tie-in game also released by LJN. Sure, you can play the game longer and search the overhead map for the elusive (and invaluable) minisub that allows the diver to utilize missiles and bombs underwater in addition to having better mobility, or build up a large power level and make it easier to defeat Jaws. Conversely, a player can literally turn this game on, hit about five or six underwater scenes, quickly power up to a level 3 and beat Jaws all in a few minutes. It’s games like this that make it impossible to believe that people shelled out fifty bucks at one time for brand new Nintendo games – some titles were worth that price, but many – oh so many – were not. 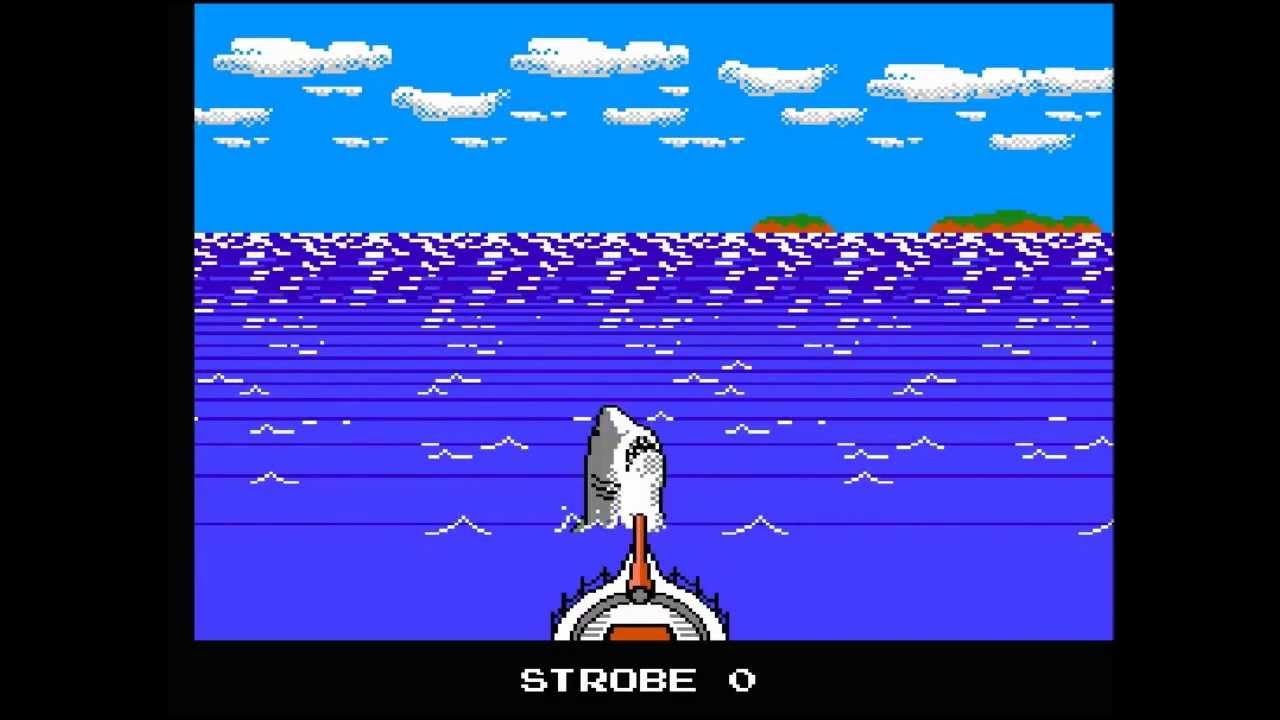 Final game sequence, in which the player must ram Jaws with the pointed bow of the boat.

Graphically speaking, Jaws (developed by Westone Bit Entertainment) gets the job done, but really is nothing special. The background screens in the underwater sequences are identical, and though it’s easy enough to distinguish the creature sprites from one another, they all look pretty crude, as if a minimum of effort really went into this game’s construction (Jaws himself, for instance, is pretty dumb looking swinging his apparently toothless snout back and forth as he swims along). The sequence where the player has to ram Jaws with the boat to finally kill him is a little more polished visually, and the sense of perspective during this particular scene makes it more challenging to line up the boat in order to deliver a fatal blow onto the jumping shark. Easily, the best bit of graphics in the entire game is the colorful concluding shot (i.e. when you beat the game), which shows the sunset happening in the horizon past a tropical island.

The receiver: most useless game power up ever – I CAN SEE THE SHARK; I DON’T NEED THIS F*$%ING ALARM GOING OFF WHENEVER IT’S AROUND!

Music and sound in the game is kind of hit or miss. Composer Shinichi Sakamoto gets to recreate John Williams’ instantly recognizable “shark theme” for the title screen, but the rest of the music here is pretty dull. Music heard during scenes where the player pilots the boat around the map is kind of cool in that it seems to simulate rising and falling seas, but the undersea music is repetitive to the extreme. Probably the best music cues here (aside from the pleasant “end game” tune) are  brief, rousing accents that indicate that either the game is starting or that the player’s boat has indeed “HIT SOMETHING.” Overall, the sound is pretty mediocre; the “dog bark” harpoon sound is the one (only?) thing a player will likely remember from this game simply because you’ll hear that damn sound effect hundreds of times.

Though this game does offer a bit of a challenge for the player who isn’t familiar with the intricacies of how the game works, Jaws has extremely minimal replay value once a player has figured out how to beat it – every playthrough would be exactly the same. Add in the fact that the game is so incredibly brief (the only NES game I can think of that’s quite as short as this is the positively abominable unlicensed game Chiller that used the Nintendo Zap Gun) and you’ve got a game that may be worth playing a time or two, but hardly is worth tracking down. Jaws probably isn’t the absolute worst movie-based game for the NES (I might give that title to The Hunt for Red October or Wayne’s World), but I’d put it in the bottom tier: that statement should say about all one needs to know.

Gameplay (and yes, this game is entirely beatable in under four minutes):