GG ALLIN AND THE MURDER JUNKIES: TERROR IN AMERICA LIVE 1993

Cons: Sick, disgusting, violent, grimy to the extreme…makes me want to take a LOOOONNNNGGGGG shower.

NOTE: This review contains content that would be disturbing and disgusting to many people.

Regarded by many music publications as the most extreme, degenerate rock and roller who ever existed and perhaps best known for being the subject of the first documentary film by Todd Phillips (he of The Hangover and Old School fame), GG Allin is nothing if not positively notorious more than a decade after his death. Born Jesus Christ Allin to a reclusive and confrontational religious fanatic father and later renamed Kevin Michael Allin by his mother in an attempt to provide him with a normal social life once he entered grade school, GG Allin grew up a complete outsider in straight-and-narrow New Hampshire, eventually turning to rock and roll as an outlet for his pent-up frustration. In a career that spanned from the late 1970s until the early 1990s, Allin (in an self-proclaimed attempt to take rock and roll back to its roots and make it more “dangerous”) worked across nearly every music genre imaginable, ranging from country to classic rock, though his music is usually categorized as being of the punk rock genre. While pumping out innumerable, ridiculously obscene albums and singles of dubious (but sometimes surprising) quality, Allin amassed the world’s most cracked-out assortment of tattoos and also developed a cult following due to his unbelievably transgressive live shows that frequently involved nudity, self-mutilation, violent and sexual assaults on audience members, and yes, even coprophagia. Over the years, much has been made about whether or not Allin actually was nuts or if his whole show was an act – according to many people, Allin’s behavior offstage was quite different than the “rabid, caged animal” he portrayed during his live performances – but it’s hard to dispute the fact that GG Allin’s screwed up childhood had some influence on how he turned out later in life.

Good thing this image is in black and white, right?

Circa 1993, Allin was coming off a fifteen month prison stint (a regular theme in his life) and had become increasingly popular in the rock and roll underground due to appearances on the Geraldo and Jerry Springer shows as well as being the subject of Todd Phillips’ exceedingly graphic Hated documentary. In April of that year, Allin and his band The Murder Junkies (made up of guitarist William Weber, brother Merle Allin on bass, and “naked drummer” Dino Sex) kicked off the so-called “Terror in America Tour,” which turned out to arguably be the most violent of Allin’s career. Numerous live GG Allin performance videos have been released over the years, chronicling both the early, less insane parts of his career as well as the infamous later period when Allin shows would be more shocking performance art rather than standard punk rock gigs. Music Video Distributors’ 2006 DVD GG Allin and the Murder Junkies: Terror in America Live 1993 features three complete shows from the spring and early summer of that year and captures Allin at his most aggressive and openly hostile. That said, this DVD is actually somewhat restrained when compared to the live show captured in the Hated documentary, or even some of the ones chronicled on the early Savage South and Raw, Brutal, Rough, and Bloody DVDs.

Musically speaking, Terror in America has its ups and downs to say the least. By any standard (even among two chord, grinding punk rock bands), The Murder Junkies are undeniably lousy, arguably one of the worst bands ever to achieve any sort of notoriety as they stumble through songs with titles like “I Wanna Rape You,” “Expose Yourself to Kids,” and many more that I don’t even feel comfortable identifying in this review. Merle Allin’s bass playing is laughably bad as he endlessly cranks out two-note progressions and the utterly out-of-place William Weber (seriously – how does this seemingly straight-laced guy end up in this band?) just seems bored most of the time, as is evidenced by his technically acceptable but lazy guitar performance. As a point of comparison, The Dwarves (who during the 1980s were comparable to GG Allin in terms of their profane lyrical subject matter and outrageous live shows) seem like The Rolling Stones in terms of musical ability alone. Indisputably, a viewer wouldn’t approach this DVD for the chance to hear this frankly atrocious band play through their set though: they would want to see GG Allin do something outrageous and I think that crowd would certainly get their money’s worth.

Terror in America kicks off with a 41(!) minute set from April 25, 1993 at The Fastlane in Asbury Park, NJ. This is easily the longest GG Allin set I’ve ever seen (the band even plays two encores!), and probably the best in terms of the performance. There’s a nice crowd on hand (this was the first show of the ‘93 tour), and Allin has some interesting interactions with them – it’s intriguing that he almost seems intimidated by some audience members and their questions. Listening to GG (appearing to be at his most cognizant and coherent during this show) awkwardly attempt to improvise “angry” responses to audience requests is suggestive of the fact that the whole “rock and roll animal” routine really was simply an act, though if that’s the case, it has to be one of the most futile expenditures of (literally) blood, sweat, and tears that’s ever been undertaken.

At any rate, the video quality during this performance is excellent by Allin show standards with a camera that’s actually fairly steady and that provides good views of the singer in action. Getting down to what GG fans would want to see, there is copious bloodshed and self-mutilation here (caused by what appears to be an empty beer can), fisticuffs with various audience members, a goofy tirade against the rock and roll establishment, and a few moments of full nudity. This last aspect is the thing that may be the one reason why GG Allin in my mind is almost a humorous sort of figure – it’s pretty funny (in a jaw-dropping, semi-pathetic/sad kind of way) to see this prototypical “violent thug” virtually assaulting the (rather courageous) women hanging around the stage and rowdy mosh pit crew alike while talking about how much he wants to rape people – then glimpse just how unimpressive the man’s “endowment” is. Yikes!

Mugshot from one of Allin’s many arrests.

Next up, we have a much more extreme performance from May 15, 1993 at the Somber Reptile in Atlanta, GA (one has to wonder why any venue on earth would book this band for a show). This show lasts 29 minutes and is probably more typical of the outrageous behavior that would be seen at a GG show, with Allin spazzing out on stage while drinking Budweiser, setting his American flag loin cloth on fire, assaulting various women alongside the stage, and inserting both the microphone and an orange traffic cone into his anus. Classy stuff! Allin’s vocals here are more growly, the band seems to be in robotic “let’s just get paid” mode, and the camera work documenting the show is very manic. Finally, we have a show from the 5th Street Warehouse in Austin, TX on May 18, 1993. This 24 minute set is almost claustrophobic, with the camera almost on-top of Allin as he performs. Audience members during this show really heckle Allin during the show (leave it to Austin to produce some weirdos who would antagonize a loose cannon character like GG Allin…), and I’d probably declare this show to be the most violent of the three included here – GG literally is fighting somebody within 30 seconds of starting the first song. At one point, Allin beats a man over the head with the weighted end of a mic stand and winds up chucking a cymbal stand into the crowd at a few different times. The conclusion of this show very nearly disintegrates into a full-on riot, with a group of crowd members confronting an extremely hostile Allin. 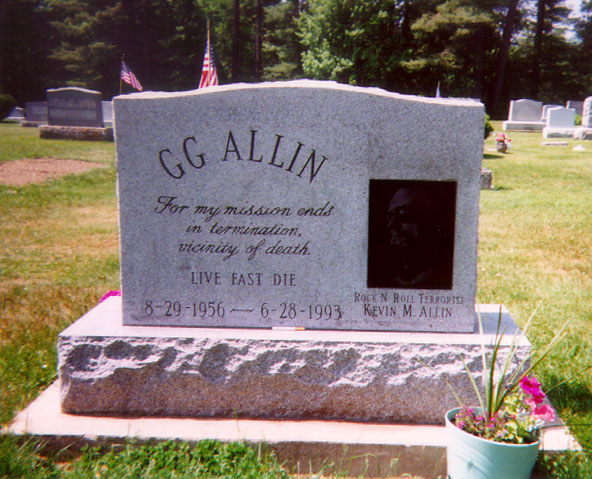 Easily, the Atlanta and Austin shows are more typical of what fans would have come to expect from GG Allin and the shaky, gritty camera work only emphasizes the chaotic nature of the performances. I suppose I should point out that none of the shows included on this DVD feature any sort of “poop play,” which could be either a good or bad thing for any individual viewer – Allin was known for his tendency to defecate on stage and audience members grew to expect it as time went on. Scenes of Allin consuming or hurtling feces were some of the most insane (and unfortunately memorable) in the Hated documentary, and I suppose some people might be disappointed that we didn’t get more of the same in Terror in America.

For my money, even though Hated would be the ideal (and perhaps only) place for a person to start an examination into all things GG Allin, Terror in America may be the best GG Allin performance video that one could get. This program certainly provides a glimpse at why this man is still regarded as one of the most whacked-out “musicians” of all time and it’s not hard to believe after watching this DVD that he would be dead within about a month after the last of the shows here from a heroin overdose. The New Jersey show included also may be the single best, most coherent live performance from the man that I’ve ever seen, which is a definite bonus. As should be obvious, most people would have precisely no interest in watching this (or any) program related to GG Allin, but for Allin fans or the curious and extremely adventurous viewer, I’d give Terror in America a recommendation.

DVD from Music Video Distributors is full frame; decent video quality considering every here was filmed in the early 1990s on (now-ancient) camcorders. Two hour DVD includes several bonus footage segments, including Allin receiving a large head tattoo in a tattoo parlor (a contrast to the way in which he got most of his ink done…), footage from a pretty awful recording session done in early 1993, 15 minutes of somewhat amusing footage taken during a 1993 instore appearance in Hollywood in which GG signs autographs and talks to his fans, and a few minutes of candid footage from 1991 with GG hanging around the family pool. Interesting…

10/10 : Extreme, real violence involving assaults on real people, actual self-mutilation, and very outrageous behavior. This program is not for the squeamish.

10/10 : Though the vocals during these shows are garbled, there’s a virtual truckload of profanity and obscenity heard during this program.

0/10 : Full nudity, but sweet Lord above I hope no one would get turned on by this…

10/10 : Punk rock at its most transgressive and disgusting. Definitely, a cult item.

The mindset of a Murder Junkie: “Just play…who gives a fuck…it’s not like we have to sound good or anything…”